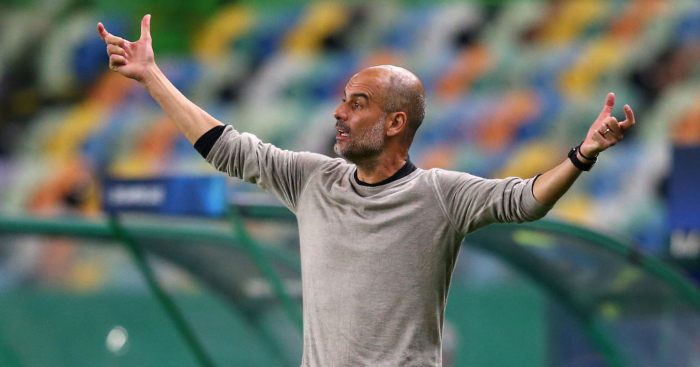 Manchester City crashed out of the Champions League at the quarter-final stage for the third season in a row as they were beaten 3-1 by Lyon in Lisbon. It didn’t have to be this way.

Pep Guardiola decided to ditch the 4-3-3 formation he has favoured in recent matches, including their 2-1 victory over Real Madrid, to switch to a 3-5-2. It was clear early on that it wasn’t working, with City barely registering a shot on goal in the first half, and it took him until almost 60 minutes to make a change. The very tactics that Guardiola employed to counter the threat from Lyon played right into the French side’s hands. His tactics may not have ultimately cost City, with Raheem Sterling and Ederson both making big mistakes late on, but they went a long way to gifting Lyon the upper hand.

The City players’ slow tempo early on didn’t help implement Pep’s formation. Guardiola’s side struggled to ask any questions with the majority of their passing going sideways or backwards, with very little penetration going forward. And they paid for their lack of urgency on 24 minutes, when Lyon took the lead through a lovely finish from Maxwel Cornet, with the Citizens still looking for their first shot at goal. The ball was played in behind City with Karl Toko Ekambi – who had been menacing their backline early on – running onto the ball, only to be tackled by Eric Garcia before Cornet was there to slide the loose ball into the net, with Ederson out of position.

1 – This is the first time since 1995-96 that no English or Spanish sides will be present in the semi-finals of the Champions League. Crestfallen. #UCL pic.twitter.com/u3CNWqR544

Guardiola left out a lot of his key game-changers, with the likes of Riyad Mahrez, David Silva, Bernardo Silva and Phil Foden all on the bench. The quite defensive line-up seemed strange considering Lyon’s seventh-placed finish in Ligue 1 and City’s array of brilliant players. The Premier League club’s recent record against the French outfit could have been a major factor in Guardiola’s thinking. City, who have kept just a single clean sheet in their last ten Champions League knockout fixtures, struggled against Lyon in the Champions League group stage last season. Losing one and drawing the other of their matches, with Cornet scoring three goals over the two games. And City needed to improve drastically in the second half if they wanted to reach their first Champions League semi-final since 2016, where they lost 1-0 on aggregate to Real Madrid.

Surprisingly, Guardiola changed nothing at half-time but with a similar pattern of play in the first 12 minutes, he opted to bring on Mahrez for Fernandinho. Lyon were starting to camp in their own half and protect their lead. City responded quickly with two free-kicks from Kevin de Bruyne, the first making the goalkeeper work before the second never threatened. City still needed much more. Cue that man De Bruyne to rescue City again.

Sterling, who was arguably the best player on the pitch for City, picked out the Belgian with a lovely pull-back on 69 minutes with De Bruyne guiding the ball into the corner of the net with a beautiful first-time sidefoot finish. The goal sparked the City players briefly, while Lyon started to show tired legs and were forced into one or two desperate lunges, as they struggled to create any chances of their own. But just as Guardiola’s men looked like getting a winner, Rudi Garcia’s team struck again in controversial circumstances. A through-ball found it’s way through to Moussa Dembele and he fired it under Ederson. There was a VAR check for a possible foul on Aymeric Laporte in the build-up to the goal, where there were suspicions of offside as the goal was given to the French club.

There was still time for City though and, after brilliant work from Gabriel Jesus down the right, his cross-come-shot found Sterling at the back post for an easy tap-in but the England international unbelievably blazed it over the bar. And less than a minute later, Lyon extended their lead. City lost the ball in midfield and Houssem Aouar’s strike was spilt by Ederson into the path of Dembele, who tucked in the rebound. It was an extrordinary 60 seconds that saw City crash out of the Champions League knockout stages once again.

3 – Since progressing from his first seven Champions League quarter-finals as a manager with Barcelona and FC Bayern München, Pep Guardiola has been eliminated in each of his three appearances at this stage of the competition with Man City (17-18, 18-19 & 19-20). Crushing. #UCL pic.twitter.com/szeEW7qLWG

It seems strange that Foden, who had a brilliant game against Real, failed to get onto the pitch against Lyon when City clearly needed a spark, while David Silva was only thrown on in the last six minutes.

Guardiola didn’t seem to have a Plan B or Plan C on Saturday night and now he will have to answer some difficult questions as City again failed to make progress in a competition he was brought to the club to win. It wasn’t the free-flowing City that we are used to seeing in the Premier League. Every team has a bad game but Pep stifled his team’s attacking threat in Portugal.