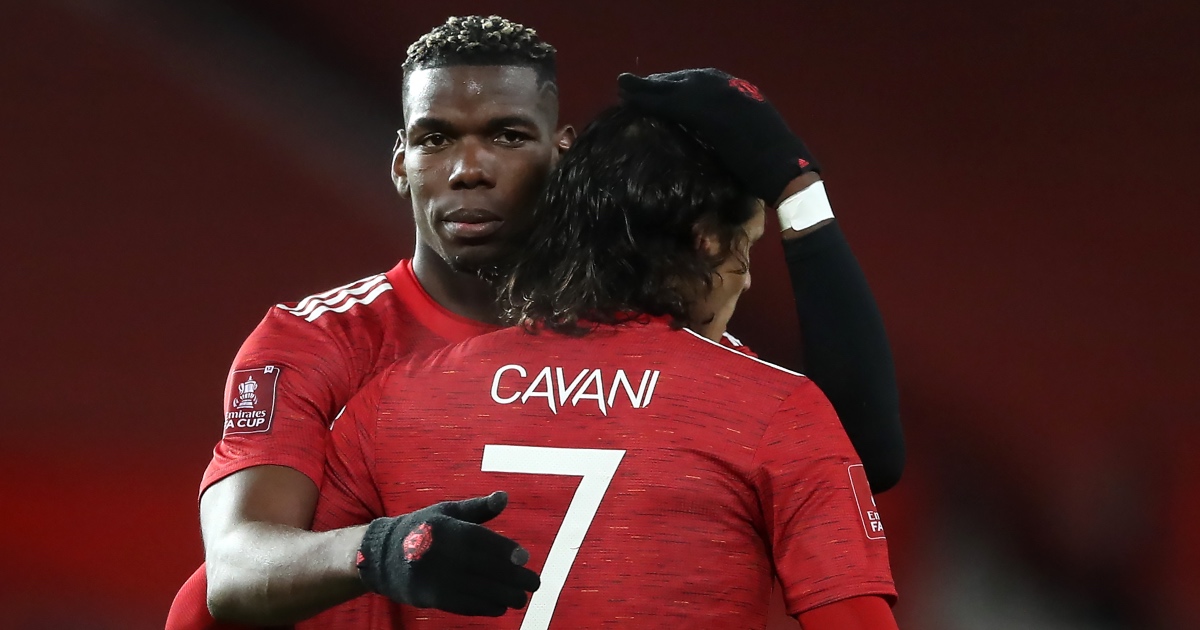 A powerful, rangey Paul Pogba run and a pass forward to Edinson Cavani or Bruno Fernandes to assist the other.

Loath as I am to give credence to those claiming football clubs – and United in particular – have a genetic identity, because the changing nature of the game makes such assertions patently ludicrous, the geneticists will claim those first two goals best illustrate the mutated version of the Manchester United DNA: quick; dynamic; lethal.

United’s fifth of the night was Pogba’s first at Old Trafford in two years: a very neat header from a delicious cross from Fernandes. And it’s stats like that which aid the contingent who claim United wouldn’t miss a player still being linked with a move away from the club.

And the Pogba-outs were handed some tasty fodder as he conceded what at the time seemed like it would be a crucial Roma penalty with a flailing arm.

“Where else can Pogba’s arms go?” asks Savage.

Not flailing weirdly above his head would have been good.

As Al Harrington, President and CEO of Al Harrington’s Wacky Waving Inflatable Arm Flailing Tube Man Emporium and Warehouse, will tell you, wacky waving inflatable arm flailing tube men can attract customers to your business, protect your crops, testify in church or raise that roof at a party. But they are a liability on a football pitch.

It’s very difficult and more than a bit dangerous to slide tackle with your arms by your side, but Pogba should  – and probably will – amend his technique after giving away that penalty. Yes, arms are necessary for balance, but there was absolutely no need for both arms to be fully outretched above his head – that will always be an unnatural position on a football pitch.

But he was involved in everything good United did and they are undoubtedly at their very best when he’s playing well. And just as it would be madness to let him go, it would be more than a bit daft not to sign Cavani to a new deal.

How much would they have to spend to land a striker that good? £100million? More?

He missed chances – he always has – but the link-up play was wonderful, he got two outsanding assists, his first finish was sublime and the second a poachers tap-in. And he’s always in the position to finish; that’s the point.

Cavani reportedly wants to leave for Boca Juniors, but United should be slapping a big old contract on the table to change his mind. Genuine goalscorers are incredibly hard to come by. When you’ve got one, cling to him.

Let’s be clear, Roma have vastly inferior players to United and there’s no way Ole Gunnar Solskjaer’s side should have been 2-1 down at half-time. He described it as “schoolboy defending” in an insult to Under-15s the world over. Fred was ball-watching, Harry Maguire was marking no-one, and Aaron Wan-Bissaka was nowhere to be seen as Lorenzo Pellegrini was simply slid in behind the defence for Roma’s second.

The world class performances of United’s world class trio and Luke Shaw – who was predictably excellent again – were in stark contrast to the rest of their teammates, who were average or worse than average.

And Paulo Fonseca may question how different the second half might have been had he not been forced into three substitutions before the break. But even he will surely privately accept that any combination of their players would have been roundly beaten by the Pogba, Cavani, Fernandes triumverate in that form; most teams would have been and should continue to be.