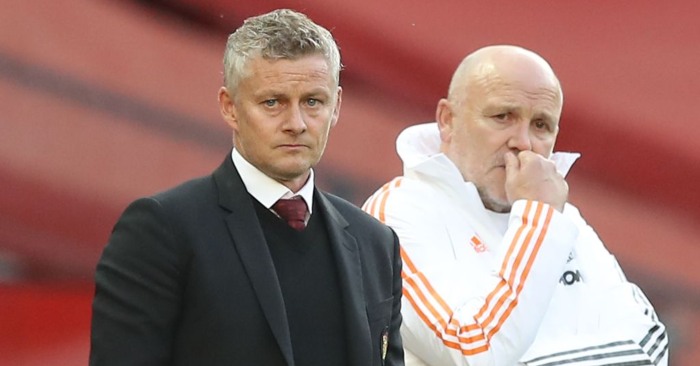 Under Ole Gunnar Solskjaer, Man United will not challenge for the title. Full stop. No signing will change that.

“They’re not going to win the league with that centre-back pairing.”

True. But as they ended last season 33 points behind the champions and needing a final-day result against Leicester to secure a Champions League place, that feels pretty irrelevant. To put that underwhelming season into context, Man United ended last campaign with fewer points – and a wider gap to the winners – than Unai Emery’s Arsenal in 2018/19. It would have been utterly ridiculous to decry Arsenal’s chances of winning last season’s title based on David Luiz and Sokratis being their centre-back pairing, and yet Gary Neville can talk about United’s apparent trophy limitations with a straight face. As if they begin and end with personnel and do not include a coaching team being out-thought by Roy Hodgson. Again.

The fact that Solskjaer lost Saturday’s tactical battle with Hodgson should not surprise anyone, of course; the older man is a far, far better coach. That should be a more contentious statement – that the manager of perennially-mid-table Crystal Palace is superior to his counterpart at one of the biggest clubs in the world – but it is actually close to inarguable. The truth is that Man United are not going to win the league with that manager, regardless of how much they spend. They could bring in £500m-worth of talent and Jurgen Klopp’s Liverpool would still be a better side; they could spend a billion and you would still fancy them to finish behind Pep Guardiola’s Manchester City.

Anger towards Ed Woodward is understandable and we are not immune to pointing in his direction, but this is not a club that could be fixed solely with largesse in the transfer market for as long as the man in the dug-out is so far out of his depth in all departments barring cheeriness and nostalgia. His ‘philosophy’? A ‘breath of fresh air, go-out-and-play mentality but with little tactical substance’, according to Daniel Storey in his excellent Premier League winners and losers. The players never appear to have a plan that goes beyond ‘attack with pace’; spending money would only see that change to ‘better footballers attack with pace’. No single player ever improves and no victory is ever attributed to anything other than individual brilliance.

Just go out and get the best man for the job.

“It has hammered home that we need to improve,” said Solskjaer after the sobering Palace defeat, before he added that “we are always looking to improve if there is something out there that is available at the right price”. He did suggest that players and staff “looked in the mirror” so he at least realises that there is more than one way to improve, regardless of all the ‘transfer message’ headlines. But can he improve those players? Last season was rescued by the purchase of Bruno Fernandes and the emergence of Mason Greenwood, but there’s one thing turning a potential fifth-place finish into third as the teams above you crumble; it’s quite another to turn a very distant third into even the semblance of a title challenge.

“We’re looking at a small pool of players that can add to the quality of our team,” said Solskjaer before a Palace defeat that put that ludicrous statement into perspective. The truth is that Man United would pass on all those Palace players – especially and including the winger they signed and then failed to nurture – because they are not supposed Man United quality. And yet those players were better than United’s on Saturday because they were drilled and drilled and drilled by an accomplished coach. It sometimes feels like the United Way might not include any actual coaching, as if such drudgery is purely for those lowly teams who do not have such an illustrious history.

There is demonstrably not a small pool of players who can add quality to Man United – that is propaganda designed to placate fans who could easily point to half-a-dozen new Premier League recruits this season who would improve that XI – but there is an incredibly small pool of players who could turn this Man United side into title winners. So small it’s more like a puddle.

They’re not going to win the league with that centre-back pairing, that left-back, that dysfunctional midfield, that striker, that bench, that manager, that coaching staff or that executive vice-chairman. The more realistic ambition would be a significantly less distant third.