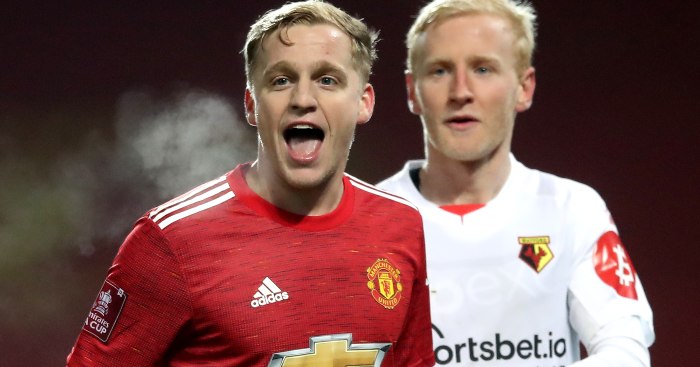 “I’ve answered this question so many times,” said Ole Gunnar Solskjaer, exasperated at another enquiry over Donny van de Beek’s prospects at Manchester United. Unfortunately for Solskjaer, the question won’t go away.

Van de Beek made sure of that with another impressive performance at the base of United’s midfield in their 1-0 win over Watford. The £40million summer signing hasn’t had many opportunities – many will say nowhere near enough – but Van de Beek has never once harmed his cause in the few chances he has been given to shine.

Van de Beek’s problem is the quality and robustness of Bruno Fernandes. The new boy is only ever going to play in the No.10 role as a stand-in, which would be a waste for everyone concerned.

His role against the Hornets offered a steer towards where he might find more minutes in this United side. Van de Beek was played alongside Scott McTominay in United’s engine room and, in theory, it is an ideal partnership.

McTominay brings the industry while Van de Beek offers the finesse. Against Watford, or lower-ranked Premier League opposition, Solskjaer doesn’t need the reassurance of two holding midfielders. While questions remain over the heart of United’s defence, the manager’s caution is somewhat understandable, especially while none of McTominay, Fred or Nemanja Matic possess the mobility to act as a sole screener. But against sides more content to sit in and stifle United, the Red Devils need a player like van de Beek who can start attacks before the burden inevitably falls on Fernandes.

Solskjaer has tried desperately to convince Paul Pogba that he can be that deep-lying playmaker but the £89million midfielder seems insistent on a more advanced role with fewer defensive responsibilities. Van de Beek, though, is far more willing and able.

Having been schooled at Ajax, the 23-year-old is far more comfortable on the ball than United’s three other holders, and a lot cautious in his use of it. Against massed ranks of defenders, his eye for a penetrative pass and his talent in playing around corners offers United a dimension they don’t currently possess.

For Van de Beek to really thrive in that deeper position, especially on the bigger occasions, United need to source a top-class defensive midfielder. But that remains the case regardless of the plan for van de Beek.

Donny van de Beek needed to impress after getting a start, misplaced just 4 of his 70 passes.
Won the ball back more times (11) than any other player on the pitch.
Tackles won (3), clearances (3) – no #MUFC player contributed more.

Van de Beek certainly was not the only United player looking to seize upon a rare opportunity. But the others struggled to make a similarly positive impression.

Solskjaer started with three players said to be among six he would willingly lose this month. Daniel James and Jesse Lingard formed half of a strikeforce made up of stand-ins and neither enhanced their claims for more action. For Lingard, it was probably a chance to say farewell to his boyhood club. It would be a surprise for James to leave this month without a replacement, but with Facundo Pellistri and Amad Diallo coming up behind him, the Wales winger may run out of chances by the summer.

James, Lingard and Juan Mata played off Mason Greenwood and his form must be a concern for Solskjaer.

Greenwood would hardly be the first prodigious talent to suffer from a bout of second season syndrome and no one doubts that the 19-year-old will play a huge part in United’s future. But his productivity has plummeted this season and, amid persistent reports of concerns over his current mentality and application – even if Solskjaer has denied that a problem exists – Greenwood simply looks like he is not enjoying himself at the moment.

Solskjaer’s habit of hooking Greenwood continued at Old Trafford tonight. He was withdrawn alongside James when the manager sent for the big guns. Greenwood, though, would surely have benefitted from playing alongside Marcus Rashford and Anthony Martial, even if it meant shifting from the centre to the right. The minutes would have been better spent on the teenager rather than Mata or Lingard.

Brandon Williams is another struggling to assert himself in his sophomore season in the first team and it seems likely that he will leave this month on loan. Williams will doubtless be back, but he too needs the game time which he won’t get without an injury crisis in the full-back areas.

For Van de Beek, however, the picture is looking rosier. He has shown Solskjaer that he deserves the manager’s trust and a more prominent role in his first-choice United side.