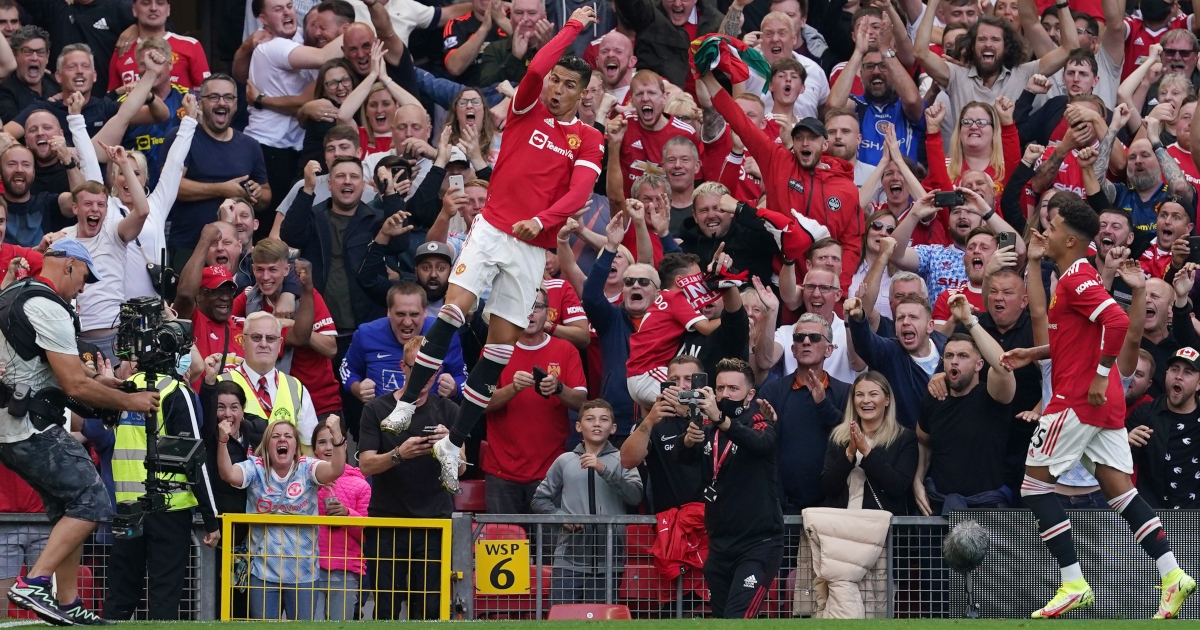 Ole Gunnar Solskjaer picked Cristiano Ronaldo in a thrilling XI as he sought ‘the best version’ of Manchester United. We’re still yet to see it…

Of course Cristiano Ronaldo started. Of course he scored. Twice.

His decisive brace gave the home supporters exactly what they wanted on an afternoon the feel-good factor returned to Old Trafford. But once the euphoria over Ronaldo’s return subsides, Ole Gunnar Solskjaer may be feeling a little shortchanged on his pre-match demand.

“I want to see a real Manchester United performance and be the best version of ourselves,” he said after handing in the strongest team sheet of his reign. With Jadon Sancho and Raphael Varane joining Ronaldo in making their first home starts, Solskjaer felt at ease enough to play just one holding midfielder, with Paul Pogba picked to pivot with Nemanja Matic.

Regrettably for the legions of fans who have pleaded with Solskjaer to do just that, the manager may use this performance to revert to his comfort zone.

When the match was a contest, something Newcastle ensured for longer than many expected, the Magpies exposed a soft centre in the hosts. On the occasions they were able to break from their flat-back seven, Miguel Almiron and Allan Saint-Maximin were a persistent threat and though Solskjaer may feel braver with Varane at the heart of his defence, his conservatism will likely prevail. Against better opposition than the Premier League’s 19th-placed side, such a shoddy shield will surely be penetrated more decisively.

Despite the excitement prompted by the names scribbled on Solskjaer’s team-sheet, Matic’s presence also added a rueful tinge. United’s transfer window cannot be described as anything other than thrilling, but their failure to add a top-class screener renders the board’s work incomplete.

That is no slight on Matic. The Serbian was one of United’s best players during pre-season, according to Solskjaer, and the veteran still has something to offer as a squad player.

But, as well as his receding mobility to deal with Almiron or Saint-Maximin’s breaks, Newcastle’s defensive approach highlighted Matic’s limitations on the ball. Only Pogba played more passes than Matic’s 101 and while the 33-year-old is hardly in the team as a creative presence, against opposition as deep as Newcastle, he is certain to see plenty of the ball. The Magpies, like any other side coming to Old Trafford, appeared perfectly content with that given Matic’s reluctance to penetrate.

Pogba can penetrate for the both of them, but as another couple of assists demonstrates, his best work is done further up the field. A deeper role restricts the France star and hampers United too because of his distaste for defending.

10 – Paul Pogba is the only player to have recorded as many as 10 assists in the Premier League in 2021, while his seven assists in Man Utd's opening four games is the most any player has registered in the first four matches of a Premier League season. Creator. pic.twitter.com/J1L9ZK1nrM

Pogba has played from the left for United, but there today was Sancho. Again. And it is not clear why.

Sancho was bought for a huge sum to fill a long-term creative void on the right flank, but so far in three of his four appearances, three have come off the opposite side where he does not look as comfortable.

Sancho wasn’t alone in his creative struggles. United toiled, certainly in the first hour when half of their 16 shots came from outside the box. One came from outside the Newcastle half. Their opening two goals courtesy of Ronaldo came as a result of goalkeeping errors rather than moments of inspiration.

Such stodginess may occur against opposition with limited ambition like Newcastle, and Solskjaer will be satisifed with the patience the Red Devils displayed and the gloss they were able to apply to the scoreline. The fans were certainly content with the outcome and Ronaldo’s role in it, but Solskjaer still has plenty to address before United really are the best version of themselves.