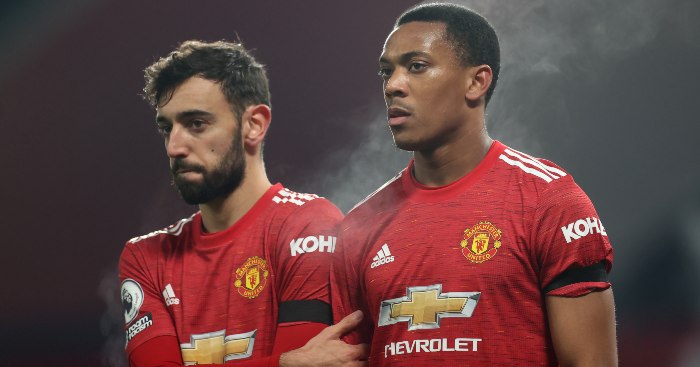 Name us a player to have had more patience lavished upon him than Anthony Martial. We’ll wait…

After all, we’ve waited for five and a half years. Surely now, or very soon, the conclusion has to be reached that Martial is not going to be the centre-forward that Manchester United desperately hoped he would.

No one can accuse the Red Devils of not investing in Martial. Time, money and patience has gone into the Frenchman but no longer is he a prodigious young talent lacking consistency. The one thing he has been this season is consistent. Just not in the way Ole Gunnar Solskjaer would hope.

Still, the United boss perseveres with Martial to the detriment of his team and their title hopes. That was highlighted on Wednesday night when United soiled themselves upon the visit of Sheffield United. Martial was by no means the lone culprit in the making of United’s mess but from the No.9, it was the latest in a series of limp performances this season.

Martial’s effort, or the absence of any, to atone for his turnover in the build up to the Blades’ winner was highlighted and widely shared, but he was similarly ineffective going the other way too. At no point did he ever appear likely to add to his two Premier League goals this season.

"Martial please sprint to him, PLEASE!"

"Mr. Matic, please get out to the ball!"@rioferdy5 looks into the sequence that summed up a disappointing night for Man Utd 😤 pic.twitter.com/y9RuZJ2EZ0

Yet, once again, Solskjaer persevered. When the manager found his hook with three-quarters of the game gone, it was Mason Greenwood on the end of it for the ninth time this season.

And again, Edinson Cavani in his cameo demonstrated what United are lacking when he doesn’t play. Within a minute of his entrance, the Uruguayan made a darting run across the near post, the like of which Martial has yet to demonstrate an understanding of.

The difference between Cavani and United’s other centre-forward options is startling. Simply by not standing still, the 33-year-old carries a greater threat.

We know Martial can move, he can be rapid when he gets up a head of steam, but like a train, only in straight lines and into space. As Sheffield United, with 64-year-old Phil Jagielka in the centre of their defence, highlighted, the simple way to stop him is to sit on the edge of the penalty area.

Around congested boxes, centre-forwards must turn poachers. But as Solskjaer has discussed several times, Martial lacks the requisite killer instinct. The United boss has worked hard to instil it in his No.9 but the evidence suggests that, in Martial’s case at least, nurture can’t match nature.

Martial has played more than twice the minutes Cavani has this season and has scored half the number of goals from almost double the number of shots on target. Cavani is outperforming his xG by half a goal. The same metric tells us that Martial should have at least four by now. Which at double his actual tally remains below par for any Manchester United centre-forward.

We shouldn’t forget that Martial ended last season as United’s top scorer with 17 Premier League goals. That haul was an outlier in his overall record. His previous best was 11 goals in his first season under Louis van Gaal.

Since then, Martial could argue that he didn’t enjoy the trust of Jose Mourinho, who brought Zlatan Ibrahimovic and Romelu Lukaku to play in what Martial regards as his position and his number. Upon being given both back by Solskjaer last season, Martial hinted that he might be ready to push on and prove that he can be United’s centre-forward for the long-term.

But the 25-year-old has since flattered to deceive again. His five-and-a-half-year career at Old Trafford is littered with streaks of form which mirrored his team’s inconsistency. But if United are serious about challenging for major honours, then Cavani has to be the better option to lead the line.

What then for Martial? Solskjaer’s usual response when his centre-forward is running into dead ends is to shunt Martial to the left, a position he is more suited to even if he might not agree. But that solution only serves to create more problems. It means Marcus Rashford moving to the right, which reduces his effectiveness. Six of his seven goals this season have come off the left flank, the other as a centre-forward.

Martial currently has no place in United’s best front three. It should be Cavani leading the line, flanked by Greenwood to the right and Rashford in the role that gets the best out of him. So what about Martial?

Perhaps that status has earned Martial special privileges, certainly when Mourinho wanted rid of him. But those privileges have been abused for too long now. There are now more deserving causes of Solskjaer’s trust and patience.