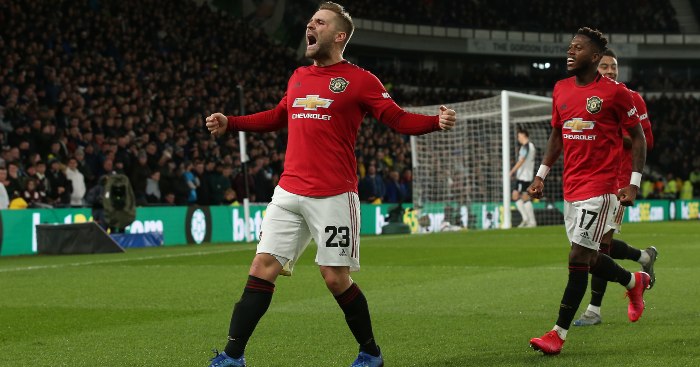 Luke Shaw has had enough kicks up the arse to recognise another when he felt Brandon Williams’ boot up his backside over the New Year. Much to some of his former managers’ chagrin, the Manchester United left-back hasn’t always responded positively to provocation, but his recent form suggests Shaw is very much up for the challenge laid down by his young team-mate.

Williams came from nowhere – he wasn’t one of the youngsters on United’s pre-season tour – to make a valid claim for Shaw’s shirt while the former England defender was nursing one in a catalogue of injuries that have blighted his career at Old Trafford. When Shaw returned and was injured again in the warm-up before United’s win over Norwich, a triumph in which Williams once again caught the eye, it looked as though the more senior full-back was fighting losing battles, against Williams and his own body.

But Shaw has shown the resilience many doubted that he possessed to strike back, not only by sharpening up his form but also adding another string to his bow.

In the FA Cup win over Derby, Shaw was back in his familiar position at left-back, but in United’s other big away trips since his return, at Liverpool, Chelsea and Club Brugge, the 24-year-old has impressed as one of three centre-backs.

At Pride Park, Shaw turned in a man-of-the-match performance to get United on their way in a 3-0 victory before teeing up Odion Oghalo for the first of his two goals as he continues to get his feet under the table at Old Trafford.

For Shaw it’s a far cry from the dark days under Jose Mourinho when the former manager was reluctant to even play him. And even when he threw the £30million signing an occasional lifeline, Mourinho suggested he was having to babysit Shaw through matches.

“We need his fantastic physical and technical qualities but he cannot play with my brain,” said Mourinho after a draw with Everton in 2017. “He must accelerate the process. He is 21 and old enough to have a better understanding. He has a future here but Manchester United cannot wait.”

Free from Mourinho’s nitpicking, Shaw is beginning to look like he has caught on. Without anyone other than Harry Maguire talking him through it, Shaw was so impressive as a centre-back that Gary Neville was compelled to suggest that he was approaching “something like his best” despite turning his hand to something new.

Neville also noticed that Shaw “looks strong and has his running back to where it was”. That was evident at Pride Park where he drove up and down the left wing seemingly with little fear of the journey back.

It appears Shaw took note of Williams’ willingness to drive forward and the threat the youngster carried during his run in the side. Williams’ energy and penetration from full-back was something United have lacked from the left, with the teenager helping himself to a goal and an assist within six games of his Premier League career. For two goal involvements, it took Shaw two years.

Of course, within that period, Shaw suffered a horrific double leg break and though he hasn’t always made life easy for himself since – actually, the opposite is at the root of the problem – nor have his managers.

And it must be remembered that Shaw is still only 24 years old, a year older than Ben Chilwell but one younger than Andrew Robertson. When he was 17, it was presumed that Shaw would have 50 England caps by now and though he still has plenty of work to do, he looks a lot closer now to adding to the eight he has gathered than at any point since his last one 18 months ago. Prior to that, it was another year and half between his seventh and eighth England appearances.

Paul Scholes expressed a similar opinion to that many carry of Shaw after the 5-0 win over Club Brugge last week: “If he wants to be one of the best left-backs in Europe he can be. He’s strong and he’s quick. He has a nice left foot. As a full-back you have to be one of the fittest on the field but he has proven recently that he hasn’t got the engine to do that. He’s not quite had the dedication to that role.

“If he had the dedication, I think he would be a top left-back.”

Recent performances suggest Williams has succeeded where Van Gaal and Mourinho failed in lighting a fire under Shaw’s bruised backside. The trick for Shaw now is to keep it burning.