Do United actually want Jadon Sancho, or just to sign him? Either way, they have other things to sort first. 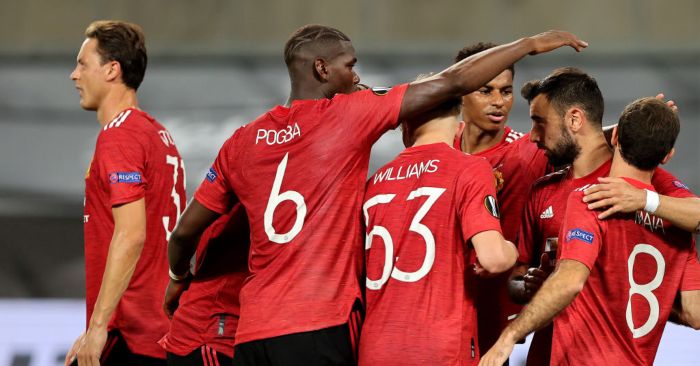 Do Man Utd actually want Jadon Sancho, or is their aim just to prove they can sign him? Either way, they have other things to sort first.

Manchester United seem to recede whenever one of their first-choice midfielders doesn’t play. That’s to be expected in the sense that losing any individual of that calibre will always disrupt a team, but the sheer level of discomfort suffered is always a surprise.

As it was against FC Copenhagen, who were handed the initiative early on during this Europa League oddity in Cologne, and became an increasing nuisance as the evening wore on. United eventually prevailed, by a single Bruno Fernandes penalty to nil, but behind the uneven shot tallies and possession figures lay a worryingly even game which could have swung in the favour of the Danes several times.

Maybe it should have done? In fact, had Copenhagen’s attacking players not been quite so timid in front of goal, they might have scored two or three times. Yes, United have advanced, but not with any sort of authority or control.

It’s hard not to ascribe that to Ole Gunnar Solskjaer. United probably arrived in Germany on something less than a mission, with Champions League qualification already assured and the need to perform significantly reduced. But was all of this evening’s vulnerability created by a lack of focus? That’s a stretch. It seemed more likely a structural issue, and the kind of situation United periodically encounter whenever they suffer any mild disruption or discomfort.

As an aside, how much do United actually want Jadon Sancho? They’re determined to own him, that’s clear, and they’re presumably very keen on announcing him across their social media channels, but what about after that, when Sancho’s time on the pitch comes at the expense of someone else?

At the end of a particularly pulseless first half, Mason Greenwood’s finish for his disallowed goal was cause for thought. His impact over the past few months has been such that United should be falling over themselves in an attempt to keep his path to the first team clear.

Maybe Greenwood will become a better player than Sancho. Maybe he won’t. Either way, the difference between them will likely be negligible, implying that United are already set in that position. At the very least, they have other, more urgent priorities which this saga is directing focus away from.

So, do they want Sancho, or do they just want to sign him? Because there is a difference and, again, this could be one of those times when a more experienced recruiting specialist – a director of football – might put a steadying arm on Ed Woodward’s shoulder and point him and his £100m towards Europe’s best centre-half or defensive midfielder.

The first half in Cologne suggested that would be the better course of action. Ten minutes into the second half, Greenwood again came closest to breaking the deadlock, drilling against the post from 20 yards. It was a chance he created himself, a goal which arrived almost from nowhere. Really? Sancho is a lovely player, truly world class, but how can anyone at United not be so enraptured by Greenwood’s potential as to think this negotiation with Borussia Dortmund is better off being someone else problem.

From the very impressive, to the less so. Twice in five minutes United’s midfield was caught out of position, and twice – again – more composure might have produced a couple of goals. As was the case on 65 minutes, when Rasmus Falk fooled Fred and Williams on the near touchline, sashayed into the box and created a clear chance from which Yesterday’s Bryan Oviedo should have done much, much better.

In response, United hit the post just often enough to create a distraction and, very late on, Anthony Martial brought a terrific save from goalkeeper Karl-Johan Johnsson, but those were chances foraged rather than created, and it had long been obvious that Solskjaer’s players had given up on their systems and turned to their star power instead.

The attacking mechanic in this team is fine. It’s what happens behind them which needs improving upon. The concerns are over control, rhythm, and ensuring that players like Fernandes and Marcus Rashford, Paul Pogba and Greenwood are receiving possession at the right time and in the right positions. It’s also important that this new wave of offensive energy doesn’t come at the expense of the team’s overall security. And it often did on Monday night, against a very limited opponent.

Perhaps there were excuses in the heat or the fatigue which has accumulated over the past two months. Some of these United players have very obviously been run dry and that, of course, was exacerbated by a motivated opponent, energised by a big opportunity in front of captive television audience.

United survived that challenge. They deserve credit for that, even if they were ultimately reliant on a hysterically generous penalty decision to advance. Still, there was little reassurance in this victory. It was a reminder that this remains a team with obvious flaws and one which possibly isn’t built on the sturdiest foundations or connected with the very best wiring.

There are some cornerstones missing. There are a few stages of progress which need to come before Sancho, if they even need him at all.