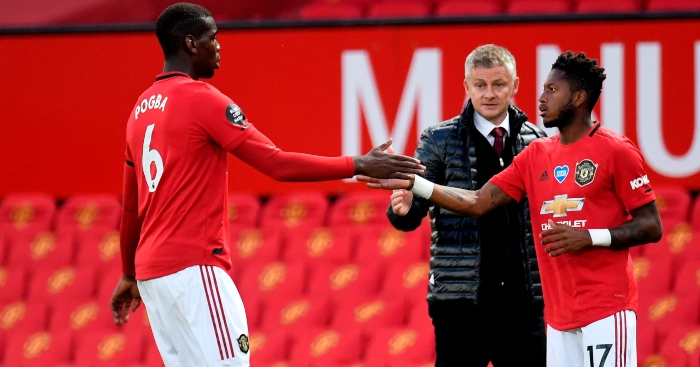 We all imagined 2020 panning out differently to the absolute clusterf*ck that it has become. Paul Pogba certainly never thought he would find himself where he is.

At the start of the year, Pogba seemed to have a plan. The first part involved returning from injury to take his place in Manchester United’s first-team, picking his moment perhaps so that he had just enough time to prove himself fit for France’s squad for Euro 2020. To that he would bring his ‘A game’ in the hope of putting himself in the shop window as a consequence of taking his country one step further than they managed four years previously. Then Real Madrid or Juventus would come with an offer Ed Woodward couldn’t refuse and life, once more, would be sweet.

Instead, Pogba finds himself relegated to United’s bench, without great prospects of getting off it in the coming weeks.

Pogba watched most of United’s victories over Newcastle and PSG this week from the sidelines. When the decisive moments came at St James’ Park and the Parc des Princes, the midfielder was in the thick of the action, but his introduction on both occasions was not an act of desperation on Ole Gunnar Solskjaer’s part. The manager has a plan of his own, and it seems to involve making Pogba sit for three-quarters of United’s biggest matches.

In his place, and that of Nemanja Matic, have come Fred and Scott McTominay. Both were excellent in Paris, especially Fred. The Brazilian appears to have gone from being pinned as United’s weakest link to an important cog in Solskjaer’s wheel for the biggest matches.

It was Troy Deeney who gave an insight into the thinking of United’s opponents, or perhaps just Watford, when he said that Fred had been identified as “the trigger”.

“Whenever you play against Fred, you let him get it because he has to take three or four touches,” he told talkSPORT this week. “He doesn’t know how to do one or two touches.”

Presumably, Fred is learning. As you might expect of a Brazilian player bought from the Ukrainian league, the midfielder struggled massively in his first year in English football in 2018/19. Then, it would have been negligent of United’s opponents not to target him.

What he does 🤷‍♂️#PSGMUN #MUFC

Last season was better, certainly in terms of appearances. In Pogba’s absence, Fred made 23 consecutive Premier League starts between last October and the first game after the restart. But he has still struggled to excel in a position that has been one of Solskjaer’s biggest headaches.

United’s system didn’t help. Fred has rarely thrived when the Red Devils play with a back four, whether it’s 4-3-3 or 4-2-3-1. Perhaps that is because as one of the deeper players in either system, there was a creative burden to carry as well as defensive one. At least until Bruno Fernandes turned up and took the load almost single-handedly. Which came as a huge relief to Matic too.

A back three, though, brings the best out of Fred and handily for the Brazilian, it has become Solskjaer’s crutch in the biggest matches.

His performance against PSG was not an anomaly. Indeed, it wasn’t the first time he’s performed so impressively in their backyard. United’s famous 2019 win, which earned Solskjaer the permanent job, was perhaps the first proper glimpse of what Fred could offer in a United shirt.

In the 19 months in between trips to Paris, Fred has shone against Liverpool home and away, Manchester City numerous times and Saturday’s opponents Chelsea on three occasions last term.

The role of screening a back three suits Fred. Shutting off passing lanes and tracking runners… it’s a more defensive job, and he is clearly more comfortable when asked to specialise. In possession, he can break lines with a dribble or a pass, but Fred isn’t expected to find runners as he might have been previously. ‘Get the ball to Bruno’ is his primary task and there is a lot of promise in the axis on the left involving Fred, Luke Shaw and Alex Telles. Shaw was often left to bring the ball out on Tuesday and when he did so, Fred was a willing dropper.

Much to Deeney’s likely disgust, since the Watford centre-forward also thinks Pogba is United’s best player – though he doesn’t explain why – it is the record signing who is sitting in wait while Fred does the dirty work.

Which is where Fred and Pogba differ. Fred might not be a creative force but in Solskjaer’s preferred system for the big games but he doesn’t have to be. That job is primarily Fernandes’s and as things stand, there is no room to play both Fernandes and Pogba in their preferred positions, not without United finding a peak N’Golo Kante-esque holding midfielder to do the work of two men behind their best technical players.

And Pogba is also guilty of the same charge Deeney levels at Fred. Pogba dallies as much anyone on the ball in the wrong areas and this season, no United player has given away possession as much. The only Premier League players to have been dispossessed more are wingers or forwards. To have lost the ball nine times in 243 minutes is simply not sustainable for Pogba or United while he is being asked to play deeper, regardless of his feelings over being made to sit there.

So unless Pogba is willing to adapt – because the suspicion still remains that he is capable of it – then he will have to get used to the role of impact substitute in United’s biggest games. From the bench, he can dream of Real Madrid as much as he likes, but without a change in his current circumstances, the kind of move he might want will remain out of reach.