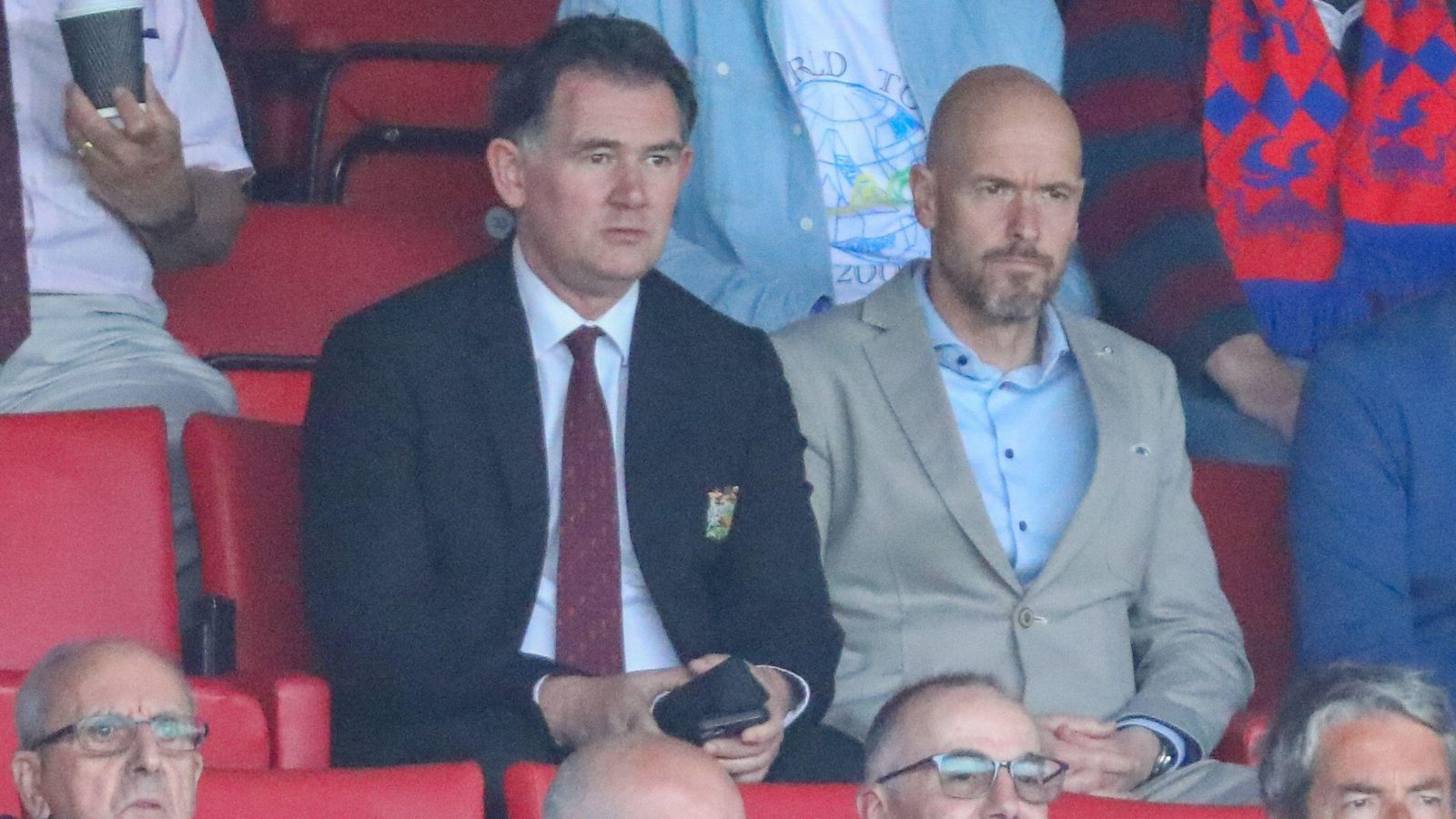 John Murtough has swerved the spotlight but Man Utd’s football director will struggle to dodge the fallout unless he somehow saves a miserable summer.

A huge fortnight lies ahead for Manchester United. And the outlook seems bleak indeed.

This was supposed to be a pivotal summer, but the Red Devils’ recruitment struggles and the wretched start on the pitch under Erik ten Hag have left United in arguably their worst state since Sir Alex Ferguson retired

The knives are out already for Ten Hag but one man has his balls on the chopping block ahead of anyone else between now and September 1: John Murtough.

As United’s first official football director, we have to hold Murtough accountable for United’s shambolic approach to a critical close season and transfer window. Of course, Murtough can only work under the constraints allowed by the Glazer family, but even accounting for those shackles, United’s have sh*t their bed this summer.

Those days were supposed to have passed. The Red Devils have plenty of form for self-sabotage and, in the past, it was Ed Woodward with his finger on the trigger as United pointed the gun at their own feet.

Woodward wasn’t a football man, his strengths lay in other areas, which made it so baffling, if not surprising, that United took so long to move with the times and hire a football director.

Finally, more than two years after they begrudgingly accepted the need for such an appointment upon Jose Mourinho’s sacking, Murtough was promoted to the position in March 2021.

Prior to that, the Mancunian had been working for the club since December 2013, when he was brought from Everton by David Moyes. His role before being named as football director was head of football development, with an overall responsibility for the academy and the women’s set-up too – areas in which Murtough has an extremely strong body of work.

Perhaps his remit remains too wide. He is still line manager for the academy and all football operations. Those duties alongside chasing senior players across Europe make for a busy schedule indeed.

Murtough clearly needs help. Darren Fletcher is there to lend a helping hand but the former midfielder seems to have become United’s jack of all trades. He was appointed as technical director when Murtough took the football director gig. But after three months in which he had Fletcher by his side on the bench and at ‘almost every training session’, Ralf Rangnick said of the Scot: “What is his role in with regard to the club? I don’t really know, to be honest.”

United made the admission that Murtough’s job was too big for one man when they revealed earlier this year that they were looking to hire an assistant football director. Andy O’Boyle was appointed deputy football director in May but that doesn’t appear to have greased any wheels.

Matt Judge, United’s director of football negotiations, resigned from his role in April and was serving his notice period at the club. He wasn’t expected to play any part in this summer’s transfer activity.

Judge’s departure followed that of chief scout Jim Lawlor and head of global scouting Marcel Bout after a review of recruitment reportedly led by Murtough. The results of which seem to have left the football director’s head in a spin this summer.

While Murtough attempts to cover all bases, he’s reporting to the new Woodward, Richard Arnold, who is also feeling his way into a tough new gig. So despite United supposedly marking the start of a new era 18 months ago with Murtough and Fletcher’s appointments, at a critical time upon the arrival of a new manager, the back office is still as much of a mess as it ever was. And Murtough seems to have been left to pick up the pieces.

It’s difficult to fathom how vulnerable he is right now. Some owners might view Murtough as a convenient human shield for the inevitable flak that will be flying in a fortnight when United end the window woefully short. But the Glazers, with their rhino-like hides, aren’t your average owners.

And why would they sacrifice Murtough who, after almost nine years at the club, is more proficient with Glazernomics than any possible replacement? There are reasons why, after two years of supposedly scouring the game for the best possible football director, they promoted from within an already failing system.

It was shaping up to be an awkward summer for Murtough as early as January when it became apparent that Rangnick was being marginalised. The German was Murtough’s appointment and his remit was initially to serve as a helping hand for the football director as a consultant after his interim gig as first-team manager. Instead, the club ignored every recommendation Rangnick made, with Murtough either the man in the middle, or alongside the Glazers with his hands over his ears.

At this stage, regardless of whether his job is in peril, Murtough’s previous body of work will count for little beyond the board room if Ten Hag is not furnished with the players he desperately needs. His is, perhaps, an impossible job given the owners and conditions he currently works under, especially for someone who prefers to stay out of the spotlight. But Murtough faces being the unwitting poster boy for a shambolic summer unless he can conjure up a nigh-on miracle.