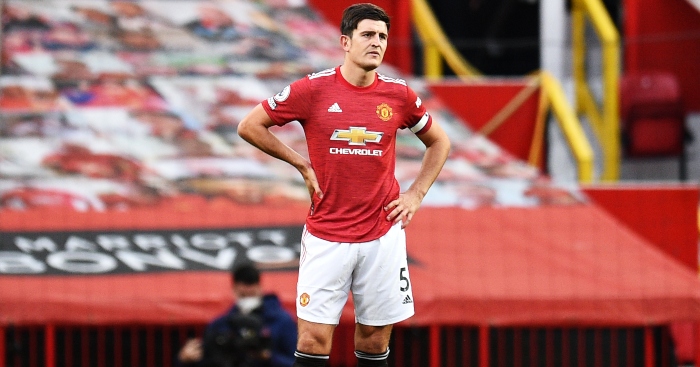 Those Greek gods don’t f*ck about. Since Harry Maguire supposedly exclaimed his antipathy for ‘the Greek civilisation’, the Manchester United captain appears to have been playing under a curse. And because of those subsequent performances, some people would only be satisfied to see Maguire tied to a rock and have an eagle peck at his liver. Being lost at sea for 10 years is too good for him, apparently…

The latest crimes on his rap sheet: Being flayed by Spurs. And Crystal Palace. And maybe Brighton. But Maguire is certainly not a lone offender. Not one of his team-mates could reflect on the dismal non-performance against Tottenham on Sunday and reasonably conclude that they have been any the less culpable for United’s dreadful start. A few would no doubt try to shift the blame but there is more than enough to go around.

But Maguire is the captain and as such, perhaps he should bear the brunt. He certainly has a case to answer when it comes to some of his and United’s defending in recent weeks, but his list of supposed misdemeanours is getting more ridiculous than what he is supposed to have shouted at those plain-clothes coppers in Mykonos.

On Wednesday, some United fans wanted him stripped of the armband. For doing the job of a captain.

Audio surfaced of an exchange between Maguire and team-mate Marcus Rashford. The striker was demanding to know why Anthony Martial had been sent off yet Erik Lamela was not sanctioned in the same way. Maguire, having already spoken to the referee and presumably asked a similar question, gave Rashford the answer he was looking for, even if it wasn’t the one he wanted. Because he was not haranguing the official over an incident he likely did not see properly, Maguire was condemned as a coward, among many other things.

This is actually disgraceful from Maguire…. get that armband off this coward of a captain #MUFC https://t.co/nx08xfSYGS

Even before that audio surfaced, some who should know better belittled Maguire’s rank. “Harry Maguire – a Manchester United captain? Seriously?” Robbie Savage screeched on Sunday. “It was schoolboy defending.”

If we are going to start demoting captains based on individual errors, the armband would spend more time being passed around the United players than the ball. Savage, though, was right in one respect: there was plenty of schoolboy defending and Maguire was guilty of some of it.

All of United’s back four were culpable, with Eric Bailly and Luke Shaw making the kind of decisions that would cause Under-9s to blush with embarrassment. Maguire is the leader so his role in the shambles merits scrutiny. But the armband does not possess magical powers granting the wearer the ability to foresee when a team-mate is about sh*t his own bed.

A clown to the left of him and a joker to the right, but despite the overwhelming evidence to demonstrate that United needed a new left-back and another centre-back this summer, they have only addressed half of the problem.

It seems that Ed Woodward, for £80million, expects Maguire to do the job of two defenders in the middle since United showed no intent of recruiting a capable partner for his captain. Woodward might suggest that enough has been spent on central defenders since Sir Alex Ferguson left but among those purchased – Bailly, Victor Lindelof and Marcos Rojo – not one has proved themselves to be capable of nailing down a regular spot or worthy of one.

Let us not forget how wretched United’s defence was before Maguire turned up and the improvement his arrival sparked. In 2018/19, the season after Woodward refused to buy Jose Mourinho another centre-back, United conceded 54 goals – 31 and 32 more than Manchester City and Liverpool. In Maguire’s first year at Old Trafford, United’s goals conceded total dropped to 36, only one more than City and just three more than runaway champions Liverpool.

That improvement and Maguire’s arrival is no coincidence and that being true, the concession of a third fewer goals year-on-year should make £80million money well spent.

But that price-tag, which Maguire had no say in, continues to be used as a stick with which to beat the defender. As is the fact that he is not Virgil van Dijk, whose title as the world’s most expensive defender Maguire took as a consequence of United’s willingness to pay Leicester’s price. The Liverpool defender’s arrival prompted the Reds to concede half the number of goals in the year after his arrival compared to the year before. The 33 per cent improvement inspired by Maguire is not quite as stark, but impressive all the same.

Van Dijk also credited Liverpool’s defensive improvement to the team rather than himself or any individual. “Everyone is involved in that,” he said in January. “We have a fantastic goalkeeper, the full-backs doing their job, our midfielders and stars up front so it is a collective thing.” All very true.

In contrast, United are a collective shambles. Ole Gunnar Solskjaer wants his side to press from the front like Liverpool, City and most other top teams. But where their rivals hunt in packs, United’s front players chase alone with little regard for the shape around them. When they get picked off, Nemanja Matic doesn’t possess the pace and Paul Pogba doesn’t have the will to adequately shield a defence, which has to play high so that United can offer the illusion of being compact.

Playing in a high line does not suit Maguire. He is quick, but he has never had rapier speed on the turn. Which is why United needed to recruit a mobile centre-back to complement Maguire’s other assets. Steve Bruce had Gary Pallister; Nemanja Vidic had Rio Ferdinand. Maguire has either Lindelof or Bailly and while the latter is rapid, when he is not limping towards the treatment room, he is too often running very fast in the wrong direction. Maguire’s best hope in the short term is that Axel Tuanzebe can shake off his injury frustrations and play the role Solskjaer touted him for more than a year ago.

Maguire deserves a break – literally and metaphorically. The 27-year-old played 5,509 minutes across 61 matches last season – more than any other player IN THE WORLD. He was the first since Pallister a quarter of a century ago to play every minute of United’s Premier League campaign.

After finishing the longest season ever on August 16, Maguire made his ill-fated trip to Mykonos. He was arrested on August 21, convicted on all charges on August 26, launched an appeal the same day; then had less than a fortnight off before reporting back for pre-season on September 7, five days before he led United out for their one pre-season friendly at Aston Villa.

Rather than going away with England in the wake of Sunday’s catastrophe, disappearing for a week to somewhere quieter than a Greek party island might have served Maguire best. But having been stood down from England duty at the start of last month as a consequence of his court case, there was never any chance of Maguire skipping this meet up.

He remains his country’s most accomplished defender and, by a mile, the best at his club. Maguire will regain his form, but Solskjaer and United have to help him to silence not only those who are doubting him but the vast hordes openly mocking him.