Home F365 Says Go all in on Pogba and a partner, or pack him off… 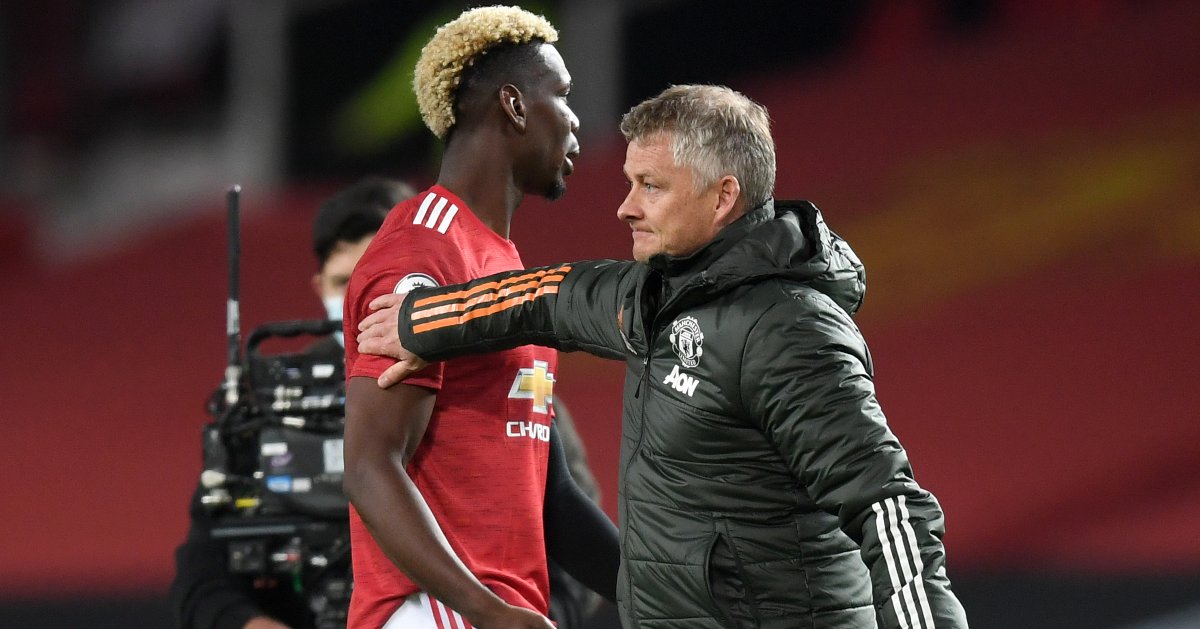 It’s been five years yet the conundrum remains unsolved. Paul Pogba should compromise and Manchester United need to find him a mate…

It has been almost five years, yet here we are still trying to suss out how Manchester United can get the best out of Paul Pogba.

The France midfielder was far from the only player to have an off night against Liverpool on Thursday. But the defeat highlighted once more that Pogba poses a problem that remains to be solved.

Unfortunately for Solskjaer, those two questions prompt different answers. It is evident that Pogba wants to be involved in Manchester United’s forward line and Solskjaer has given him that opportunity since his return from injury.

Pogba has made a pretty good fist of things. With two goals and five assists in 11 games since the middle of March, United’s record signing has made a telling contribution down the home stretch. In isolation, that would be evidence enough to persist with Pogba on the left of the front four.

But Solskjaer’s brief extends beyond pacifying Pogba. And his continued deployment in the attacking quartet has ramifications for the rest of United’s attack.

It means moving Marcus Rashford off the left to the right, where the England star is far less comfortable and effective. And switching Rashford shunts Mason Greenwood out of the first XI for as long as Edinson Cavani occupies the centre-forward’s position.

The Rashford – Bruno Fernandes – Greenwood triumvirate behind Cavani offers United by far the best balance. With that front four, there is not a team in Europe who United couldn’t hurt.

Where does that leave Pogba? Ideally, back in the position Jose Mourinho signed him to play.

There are two things stopping Pogba from forming a top-class double-pivot at the base of United’s midfield.

Firstly, his own mind. Pogba seemed to have it in his head that he doesn’t want to operate in a deeper role. He wants to be further forward, a fixture around the opposition 18-yard box.

A chat he had with Rio Ferdinand for BT Sport back in March suggested he was more open to the idea of playing deeper than he previously was. “I would prefer to be further forward, but that doesn’t depend on me,” he said. “Obviously I always love to be in front you know, but with my body and my abilities, if I can do both then why not? ”

“I want the ball, to touch the ball, to make the last pass or the assist or the shot or the header. But if I can also be there defensively, I can do it you know?”

That would certainly get Solskjaer out of a bind. And even the blind can see that Pogba has the physical qualities, the vision and range of passing to play in more of a quarter-back role with the licence to get forward.

But here’s the second thing: Solskjaer hasn’t got a partner for Pogba. Not one that can cover for the Frenchman when he roams towards the final third.

Currently Solskjaer cannot be without two holding midfielders even when Harry Maguire is fit to keep Vic and Eric’s Chuckle Brothers tribute act away from the Old Trafford stage. Fred and Scott McTominay are his go-to holders and while both have their qualities, especially in Fred’s case, it’s still difficult to identify them. Certainly in the context of what Manchester United need from their midfielders if they hope to challenge for the Premier League title and make strides in the Champions League.

F365 Says: Should Man Utd stick or twist on a mediocre midfield hand?

Pogba could certainly add the vision, the drive on the ball, the range of passing that none of Fred, McTominay or Nemanja Matic possess. Ideally one like his French pal, N’Golo Kante.

Where could United find a player like Kante, who might be available at price even the Glazers couldn’t balk at?

The Seagulls are ready to cash in on Yves Bissouma this summer, apparently, as long there is around £40million on the table. Even in the Covid climate, Bissouma will be a bargain for someone, with Arsenal, Liverpool and Manchester City also hoping it might be them.

There is similar interest in Andre-Frank Zambo Anguissa now Fulham have been relegated.

Both he and Bissouma enjoy a burst forward, something anyone in United’s midfield should relish. Pogba would have to accept his role in allowing them to drive up the pitch. If Solskjaer would prefer a more static presence in front of his back four, then perhaps he needs to butter up the Glazers to free up whatever it will take to tempt West Ham into parting with Declan Rice.

Or, if Pogba isn’t inclined to suppress his own forward urges from time to time, then maybe United need to consider their stance over his contract renewal. Don’t simply re-sign him to maintain his value without addressing the factors behind his abject lack of consistency since he returned to Old Trafford.

For Pogba, and everyone else, it must be side before self, every time. Not just some of the time, or even most of it. If he can get on board with that ethos and play in a deeper role, then United should make their priority this summer a partner for their mercurial midfielder, not a marquee right-winger to satisfy the fleeting urges of some of the more moderate Glazer critics among the fanbase.