Home F365 Says Man Utd moaners can’t have it both ways. Shut up or f**k off 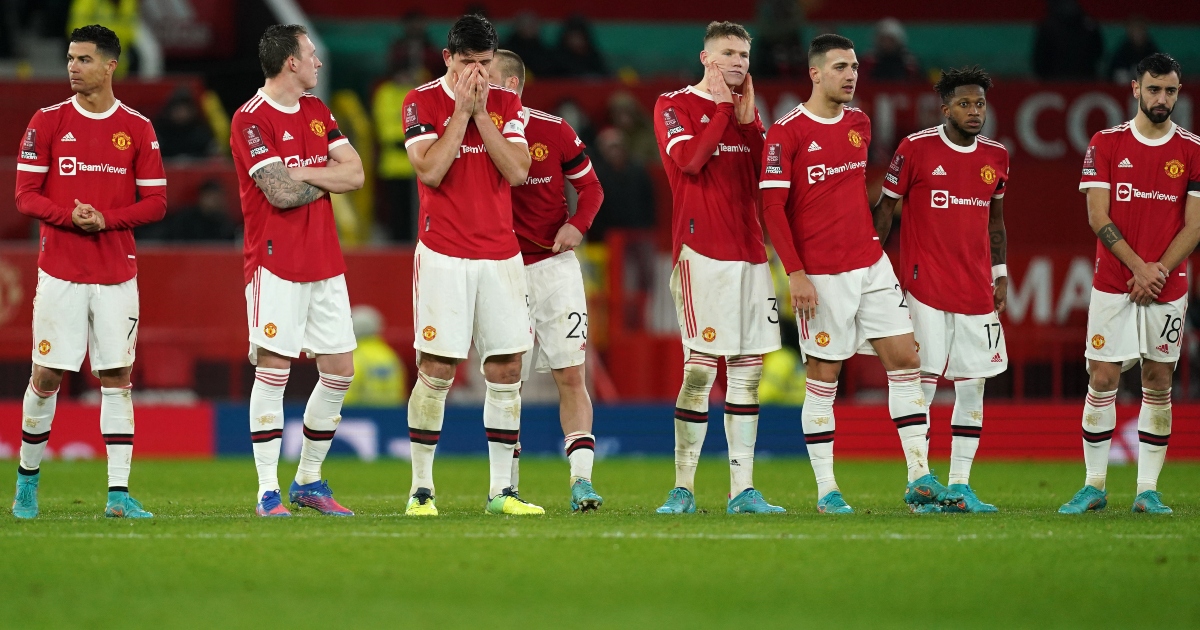 Man Utd’s players have found a new reason to complain, directly contradicting another of their many moans. This has gone way beyond tiresome, lads.

The fragile little birds around Carrington have been chirping again, bleating once more about the day-to-day grind of being millionaire Manchester United footballers. Their gripe this week: Ralf Rangnick’s training is too ‘old-fashioned’.

ESPN’s snout has offered the lowdown on the view from ‘a section of the squad’ who aren’t much impressed by Rangnick’s methods. Nor do they seem to take his assistant Chris Armas seriously, with the American coach having been likened to Ted Lasso by some of the players.

It doesn’t seem to matter who is putting the cones out – the United players aren’t happy with the theme of Rangnick’s sessions. Apparently, they are ‘too often based on 11 versus 11 work, rather than dynamic drills they feel help to keep them sharp between games’.

The complaint continues: ‘Sources told ESPN that much of the work being done on the training pitch is built around improving organisation and shape with less emphasis on sessions designed to hone particular skills.’

They’ve changed their tune. In the final days of Ole Gunnar Solskjaer’s reign, when Liverpool and Manchester City were pulling their pants down at Old Trafford, the excuses coming in whispers from the squad focused on a supposed ‘lack of direction’ from the manager and his staff.

Now they are getting it, rather than being challenged, it seems the players would rather be back on the rondos and 5-a-sides.

The problem, though, is these players don’t get it. They couldn’t grasp Rangnick’s preferred 4-2-2-2 system and style, forcing the manager to swiftly change his approach to better suit the limited capabilities and intellect in the hapless rabble he inherited.

Nor, seemingly, do they recognise the perception of them outside their own plush bubbles. Maybe they do and they just aren’t bothered. Regardless, for at least four managers and almost eight years now, their failures have been the manager’s fault.

The players didn’t like Louis van Gaal’s overly-prescriptive style and they hated all the meetings. Jose Mourinho was too mean. Solskjaer didn’t give the team enough guidance; Rangnick is now giving them too much.

At no point have any of these players looked inwards or at their teammates to ask: might we be the problem?

Never have so few players complained about so much. Under Rangnick, they aren’t happy about being made to stay at work after dark. They don’t like the booths installed in the canteen. When Solskjaer was still around, they decided that they were working for ‘too many young coaches learning on the job’.

Don’t knock it until you’ve f**king tried it, lads.

At least they only have to pretend to tolerate Rangnick and Armas for another few months. Then the next manager will arrive, with a whole new set of methods to find fault in. But they really ought to be careful what they wish for.

Just imagine if Pep Guardiola or Jurgen Klopp was airdropped into Old Trafford to reverse United’s slide towards mediocrity. Guardiola’s demands and Klopp’s intensity would make these players’ heads fall off. How many of United’s players could be expected to go to City or Liverpool and adjust accordingly? Doubtless they would all fancy their chances based on talent, but the reality – an alien concept at Carrington for almost a decade now – would be very different.

Outsiders have their suspicion over the sources of these seemingly bi-weekly insights into the Man Utd mindset, and perhaps it is just one or two peeved players on the periphery, fed up with having to bib up for the opposition in training while Rangnick focuses his attention on 11 other players. But everything about the squad’s demeanour, body language, performances and results lends more than enough credence to the leaks, even the absurd ones.

The time has long since come for United’s soft stars to put up, shut up and in some cases, f**k off.