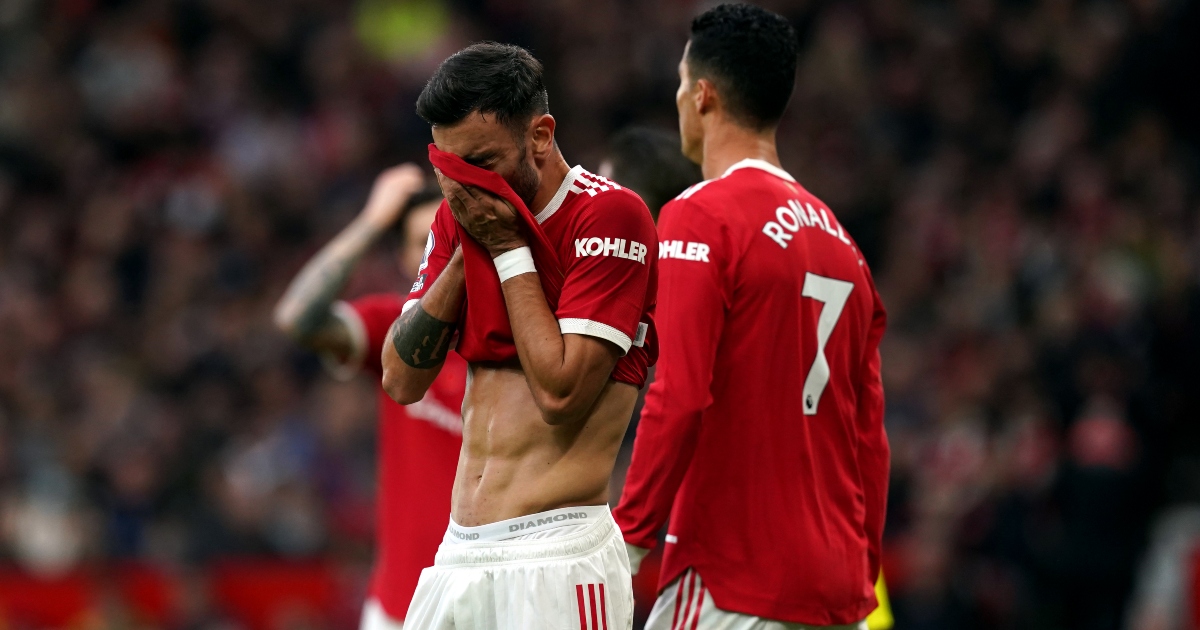 Man Utd may well finish fourth, allowing the cycle of sh*t to keep spinning. Does it have to get much worse at Old Trafford before it gets better?

It’s the hope that kills you. At least that’s what always seems to be the case with Manchester United.

The Red Devils moved into the FA Cup fourth round on Monday night, beating a well-fancied Aston Villa side to make it just one defeat in 10 matches since the sacking of Ole Gunnar Solskjaer.

That, of course, doesn’t come close to telling the full story. United were fortunate, not because of VAR, but because Villa failed to make the most of the moments they created.

United plodded and toiled. Again. Victory was achieved and progress gained but it was another utterly joyless performance. Who enjoyed it least – players, management or fans – it is hard to tell. Playing for and watching Manchester United should be a pleasure but, along the way, it seems to have become a chore. Everyone looks so bloody miserable.

Perhaps with good reason. Because, once again, it appears United have taken another wrong turn. They appointed a man with a reputation for building clubs and teams from the bottom up, but gave him only six months to re-float the Titanic and a squad of players wholly unsuited and unmoved by his – or anyone else’s – approach.

The club have been treading on rakes ever since Sir Alex Ferguson walked away almost nine years ago but perhaps only now the reality is starting to dawn on some people at Old Trafford. With the current personnel, their fortunes don’t look like greatly improving any time soon, so maybe it has to get a lot worse before it gets better.

The United hierarchy have spent the last God-knows-how-many seasons trying to salvage what they can from the last, all the while throwing more money at a project that most would now say is doomed to fail. At no single point have they settled on a clear plan, instead bumbling from one mess to another, with the odd glimmer of hope prompting optimism for a brighter future. Which never comes.

After almost a decade which has seen four managers try and fail, and a fifth flailing in style if not in results, maybe now is the time to rip it up and start again?

What would that involve? Purely from a football perspective, first and foremost, giving a manager or management team the power, space and backing to clear out the dressing-room. United’s squad is a rabble gathered by a variety of managers using a range of methods and means.

You have star names struggling to justify huge reputations; players bought for big money who’ve failed to take the expected step; academy graduates of varying quality; youngsters bought from other clubs going nowhere fast; and players lingering from previous regimes going through the motions while banking the kind of wages no other club would contemplate paying them.

So it is no wonder that cliques form and managers struggle to unify the squad behind any particular philosophy. The only thing that unites the vast majority of them is that they aren’t good enough, individually or collectively, to take United where they allegedly expect to be. A simple sniff test demonstrates that: how many of this squad would Jurgen Klopp or Pep Guardiola take at Liverpool or City?

But United can’t dismantle the squad. Or rather, they won’t. The reasons for that go above the dressing room and manager to the executives and owners.

For as long as the squad is there or thereabouts – ‘there’ being the top four – the owners are content. Sure, they’ll offer the odd gesture to provide the illusion of intent, but within the boardroom, there is absolutely no appetite to commit to the investment, planning and graft required to haul United back to competitiveness at the highest level.

‘Protecting assets’ has been a higher priority in recent years – and they’ve f***ed that too. They offered huge contracts to players like Marcos Rojo, Phil Jones and Eric Bailly to avoid losing them for nothing, only to watch them rot and, in some cases, leave for free anyway. In the case of Jesse Lingard, they turned down offers last summer believing him to be worth more, only to then pay him £100,000 a week for another season before he walks away a free agent a year later.

But the Glazers can stomach that, all the while the Champions League cash keeps rolling in and the commercial operation retains its license to print money. Ed Woodward was overseeing that operation since 2013, despite being Boris levels of unfit for his office, but he will be replaced at the start of next month. By his own sodding clone. Because why fix something that, to the Glazers, isn’t broken?

Between them, Richard Arnold and John Murtough will decide who will be the next man to take on managing United. Perhaps it will be Ralf Rangnick, who could recommend himself for the job if and when he moves to an advisory position. It almost doesn’t matter because the cycle of mediocrity will most likely continue.

United look as well placed as anyone to sneak into fourth place, keeping them in the Champions League after what they will doubtless label another ‘transitional season’. Which is the only type of season they have at Old Trafford these days.

Maybe what they need to trigger a real and tangible reboot – not the ‘cultural’ sort that Woodward and co blathered about while signing Aaron Wan-Bissaka for £50million – is a nuclear meltdown, rather than the death by a thousand clumsy cuts they are currently enduring. Which might mean defeats to Middlesbrough and Atletico Madrid in the cups and the results their performances deserve to leave them in mid-table in the Premier League at the end of the season, rather than the bottom of the top where they’ve loitered since Fergie left.

Only then might the penny drop among the United hierarchy – though it would be wise not to lump on that. Will the likes of Cristiano Ronaldo, Bruno Fernandes, Raphael Varane, Marcus Rashford – and any other individuals you believe are worth keeping – stick around to deal with the fall-out? It’s not like they could be any unhappier, if we believe their current demeanour. Being part of a genuine rebuild, from the bottom up, must be better than whatever this is right now.