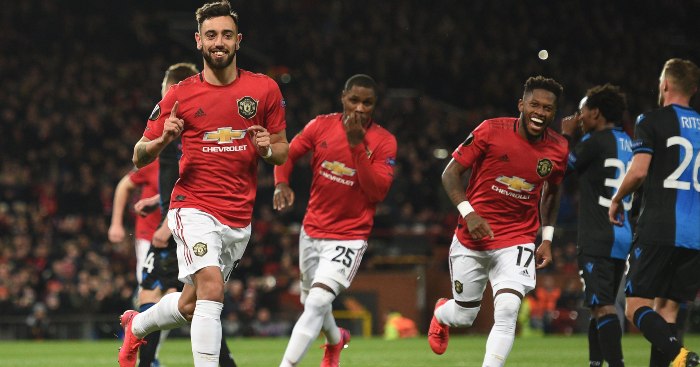 Have Manchester United turned a corner? That question headlined numerous outlets with greater reach than ourselves on a monthly basis through the first half of the season. Had they signed Bruno Fernandes in the summer, the answer when it was first asked in September would have been a resounding ‘yes’ and United would likely be sitting snugly in the top four, or at least as the tallest dwarf looking down on the others in the scrap for the final Champions League place.

Fernandes has taken United around corners seemingly with every other touch since moving to Old Trafford six months too late. Ole Gunnar Solskjaer cut a frustrated figure while his players spent the first year of his reign chucking the same sh*t at defensive walls, so often in vain, but now he finally has a playmaker who can find ways around, over and through even the most stubborn rearguards.

Against Club Brugge, Fernandes again showed United what they have been missing in recent seasons by playing a role in all three goals that were scored during his hour on the pitch. The Portugal star slotted home the opener from the spot, but he didn’t win the penalty or provide the assists for Odion Ighalo and Scott McTominay. Instead, he assisted the assisters. He teed up Daniel James for a shot which was inexplicably palmed away by Brugge defender Simon Deli; Fernandes then dropped the ball onto Juan Mata’s right foot for a simple – for Mata, at least – half-volleyed pass into Ighalo; before winning possession and turning it into Fred, who nudged it on to McTominay.

Fernandes’s impact highlights not only the Portugal midfielder’s quality – which too few seemed entirely convinced of while he was doing ridiculous things in a Sporting Lisbon shirt – but also the monotony he has banished from the United midfield.

And while you could already cut an epic-length showreel of Fernandes’ solo flicks and touches, the lift he has given his team-mates is startlingly evident.

When he plays in the no.10 role, drifting across the front line, his speed of thought and touch has given the individuals in the United attack a shot in the arm, while when he drops deeper, the wingers and centre-forwards know they can be found if they burst beyond defenders or drop into the hole Fernandes has left.

Ighalo has his goal 🙌

That ball from Fernandes 🤤 pic.twitter.com/ElJVo3A6lU

We have already seen clear evidence of a blossoming relationship between Fernandes and the likes of Mason Greenwood, Dan James and Anthony Martial. Tonight, it was Fred and Juan Mata who seemed to tune into Fernandes’ frequency. Mata looks thrilled to have found a team-mate not only with the same vision and creative mind but also the technique to put those pictures into practise. Fred, who trebled his United tally just in the final 10 minutes, dovetailed wonderfully with Fernandes, holding his position when the no.18 drifts forward, or darting into those spaces himself when the new boy drops deeper.

As impressive as Fred has been in recent weeks, especially when you consider the level from which he has risen, the thought of a fit and motivated Paul Pogba harmonising with Fernandes is almost enough to make United fans forget the dirge they have been subjected to in recent years. Sadly, though, that dream looks likely to become a reality only for a few brief weeks when Pogba decides that it is time for him to do the bare minimum to secure his place in the France squad before fluttering his eyelashes at any club who might pay Mino Raiola a fat commission in the summer.

Fernandes looks like the player United hoped Pogba could be, the star they presumed he would be. Of course, we have to put his start into context. So far, the January recruit has faced Wolves, Chelsea, Watford and Club Brugge twice. Even Angel Di Maria turned it on for five games at the start of his Old Trafford career.

United’s next three Premier League games see them travel to Everton and Tottenham, with a Manchester derby sandwiched in between. We will learn so much more about Fernandes’ quality in the next two and a half weeks. But we already know that United, boosted also by having conceded only one goal in their last seven, go into these big tests with so much more confidence and belief courtesy of Bruno’s early brilliance.