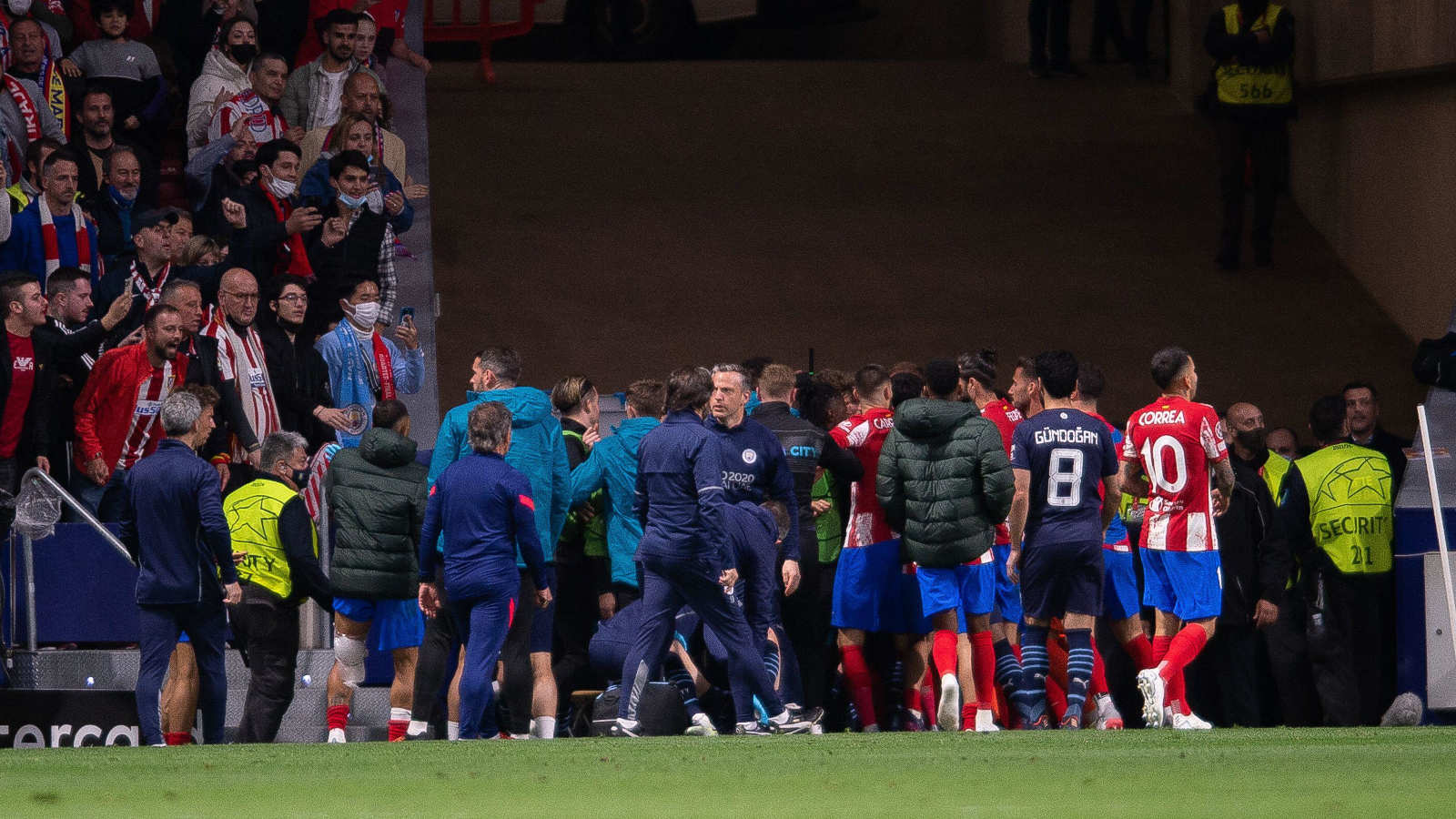 Atletico Madrid put on a display in their Champions League match against Manchester City that ‘no-one wants to see’. What utter rubbish.

So Manchester City versus Liverpool turned out to be the calm before and after the storm. After the controlled and composed match at the weekend – and before the FA Cup semi-final – Manchester City jetted off to Spain for their Champions League quarter-final second leg to face a team that has long had a reputation for winning with the assistance of good old-fashioned intimidation. They came through the test, albeit only just.

Pep Guardiola may have been concerned by the sight of Kevin De Bruyne having ice applied to his knee following his second-half withdrawal or Kyle Walker limping from the pitch following yet another ‘robust’ Atleti challenge, but he might well also be balancing those thoughts against the value of coming through such a bruising encounter with a win and a place in the semi-finals.

The word ‘shithouse’ in the modern, English sense has had its origins traced back to 1960s Liverpudlian slang for ‘an extremely unpleasant individual’ or a ‘coward’. But it’s likely that its most common application in the 21st century is to be found in football. Shithousery is a concept that has a more nuanced meaning in the sport than just relating to players or teams that kick seven bells out of their opponents.

Shithousery is different to – or at least more than – mere thuggishness. It’s a discipline that encompasses all of football’s ‘dark arts’, and while the fouling can be an important component, at it’s absolute peak it’s about considerably more. The shithouse doesn’t foul because they want to hurt their opponent – although they may legitimately want to hurt their opponent. The shithouse fouls to disrupt play, to get in the heads of their opponents, disturb their thought processes and ultimately impede an entire team’s plans.

And fouling alone is seldom enough. It’s also to be found in words whispered into the ear of an opposing player questioning the fidelity of their mother at a corner kick, in every piece of strategic time-wasting, playing to get an opponent booked or sent off, or those wide-eyed looks of incredulity when called out on it by a referee. Fouling often comes as a last resort after other subtler methods have failed.

Perhaps the definitive example of the genre came at the Azteca Stadium in June 1986, when Diego Maradona out-jumped Peter Shilton to punch the ball into the goal and give Argentina the lead against England in their World Cup quarter-final. Not only did Maradona have the wherewithal to get to the ball ahead of a goalkeeper who was six inches taller, but he followed that up by celebrating it as if he’d scored the greatest goal of his career; many might argue that he had, although scoring a second minutes later which genuinely was one of the best in the entire history of the World Cup, and then claiming divine intervention for it afterwards, was phenomenal.

Place that in the context of the time, when Argentina was still licking its wounds as a result of the Falklands War and the general global unpopularity of England and the English, and it becomes a perfect trifecta of winning, cheating and winding up the opposition. Maradona himself was smart enough to know that he didn’t need to run his mouth off about it for long afterwards. The goal has come to speak for itself as one of the World Cup’s defining moments. Small wonder the shirt he wore that day may be worth millions of pounds.

He never expressed any regret for what happened that day. Why would he? It would be antithetical to the principles of shithousery to do so. Meanwhile, a certain type of Englishman has continued to periodically froth about it for more than three and a half decades ever since. Job done, Diego.

The Guardian has reported that the jersey Maradona wore on the day he scored 'Hand of God' and 'Goal of the Century' will be auctioned and is expected to be sold for at least 4 million.

Hundred bucks say Peter Shilton himself will buy it.

None of this fits with the image football would like to present of itself and this leads to the familiar refrain that it’s something that ‘none of us want to see’ from broadcasters when it breaks out. In saying this, they are saying the quiet bit loudly: that neither they nor the game’s governing bodies want to see anything that threatens the carefully cultivated illusion that football is all about fair play, respect and other beige, sanitised soundbites.

The standard social media reaction to this scramble for some sort of claim to moral high ground is derision; we enjoy it because it’s often very funny (the aggrieved reactions to having been called out for a piece of foul play alone can border on pantomimesque), and quite possibly because, at a time when top level football is increasingly having its sharp edges planed out of existence, it’s a reminder that the passions experienced in the stands can still be replicated on the pitch.

BT Sport pushed this ‘why won’t somebody please think of the children’ approach to its limit by pixelating Jack Grealish’s mouth to obscure footage of him mouthing a very rude word indeed in the direction of Stefan Savić, a new level in an increasing trend from broadcasters who already infantilise their audience by apologising every time a robust piece of language drifts into the earshot of one of their (many) microphones.

And none of this means that, for all the censorship, some of the coverage of shithousery can’t feel problematic at times, at least on a subliminal level. There is a tendency to present it as somehow ‘foreign’, as though it’s something that only players from other countries – particularly Latin countries – get involved in, when it plainly isn’t. Tactical fouling has become part and parcel of life in the Premier League, for example, and Manchester City often seem as guilty of that as anybody else.

Going back a little further, Don Revie’s Leeds United team of the mid-1960s to mid-1970s embraced it to such an extent they’re still hated by some over it, half a century on. But ultimately, as long as there has been professional football, there has been shithousery. Much of what’s really changed has been the language used to describe it: a 19th century ‘robust challenge’ could easily be interchangeable with the 21st century’s ‘actual bodily harm’.

But if shithousery has one fundamental Achilles heel, it’s one that Atleti tripped over against Manchester City. Success isn’t gauged by the number or severity of injuries caused, it’s gauged entirely by whether you win the match. Atleti not only notably failed to do this, but managed barely a couple of shots on target over the two games, for all their improvement in the second half of the second leg. It often felt as though they had nothing more to offer than intimidation and ‘tactical’ – initially, at least – fouling.

The ultimate aim of the shithouse is to secure that win by any means possible. As such, Atletico Madrid failed against Manchester City.

And as much as this was a defeat for Diego Simeone, it was a victory for Pep Guardiola. Anybody who’s spent much time playing football will know that wins ground out in this manner can have an atavistic emotional effect upon a winning dressing room afterwards, a form of group therapy that cannot be replicated in training. Put it this way: there is little to no chance that City’s players, in the sanctity of their dressing room after this match, were sitting with furrowed brows, soberly discussing how appalled they were by Atleti’s behaviour. This will have felt like a collective rush to blood to the head and if they can keep that forward momentum going, it could provide them with a useful adrenaline shot for the rest of the season.

Again, it’s football’s head against football’s heart. Against Liverpool, Manchester City played with their heads. It resulted in an atmosphere that called into question what ‘rivalry’ means in the 21st century, when football clubs increasingly resemble gilded palaces rather than the devoutly working class red brick temples of the past. If Guardiola’s baseline for success from that match was winning it, he didn’t succeed. But against Atletico Madrid, under duress from their hosts, they dug into a bag that cannot be bought or artificially replicated but which comes from somewhere else, and they came through it. A little battered, a little bruised, but in the semi-finals of the Champions League regardless. And that, as Atletico Madrid will also be reflecting is all that counts.