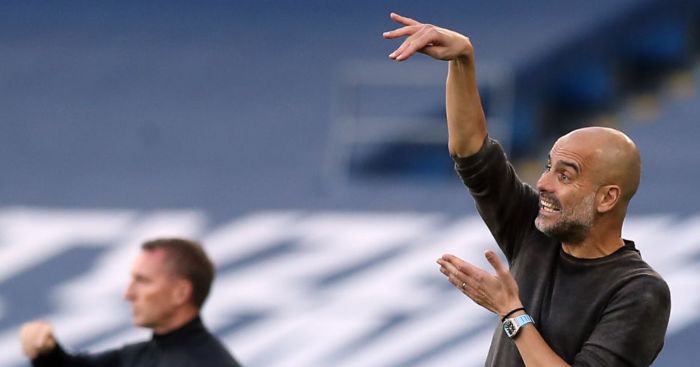 As Eric Garcia fell into a trap that could only have been made more obvious if Admiral Ackbar had donned a sky blue Stone Island jumper and bellowed a warning from the sidelines, it was worth considering just how much fun Jamie Vardy will have when West Brom eventually appoint a beleaguered Pep Guardiola as manager in the year 2035.

Continuing to age like a fine vodka and Red Bull three months off his 34th birthday, the Leicester striker reimagined the entire Etihad Stadium as that one corner of The Hawthorns on Sunday evening. Manchester City’s defence was of the requisite Championship standard to complete the visualisation.

Three of them conceded penalties, Nathan Ake managing to commit his yellow-card offence outside of an 18-yard box that witnessed more embarrassing tackles in 90 minutes than a nudist colony in the dead of winter.

With more games alongside Kyle Walker and Benjamin Mendy, he will surely learn.

The same stands for impending signing Ruben Dias, the centre-half from Benfica who will soon be parachuted into a team to whom collapsing under pressure has become second nature.

The problem is that the players they add are becoming part of the problem rather than anything resembling a solution. Their only two defensive signings since the 2018 winter window and until this summer were Angelino and Joao Cancelo: the former has left and the latter really might as well have.

As Frank Lampard might one day come to realise, a broken system will taint incoming players more often than it is fixed by them.

There is a danger in overlooking just how good Leicester were at those crucial moments. Brendan Rodgers came with a game plan and while they looked overwhelmed at certain periods, neither he nor his players lost focus when it mattered. Riyad Mahrez’s goal after four minutes could easily have knocked them off course and consigned them to another disappointing visit to a title contender, but the Foxes were regimented and ruthless.

Vardy will and should take the plaudits – his flick for the second goal was sublime – but Harvey Barnes truly came of age, Nampalys Mendy continues to retrospectively justify his former record fee and the house where full-backs go to add an extra zero to their valuation remains open for business. Pep Guardiola must be weak at the knees at the thought of signing and then breaking either Timothy Castagne or James Justin.

Kevin de Bruyne was successfully swarmed as Manchester City were more than welcoming hosts to a visiting team that has never met anything it hasn’t tried to counter. A team defined by its mechanical team goals look more reliant than ever on sparks of individual brilliance.

Manchester City had five shots to zero in the first 35 minutes and two to four in the 25 minutes that followed, scoring one goal in the first sequence and conceding three in the second. Few sides are as susceptible to collective collapse. The reluctance to identify and resolve the problem only exacerbates it.

Where Leicester kept faith in what they wanted to do despite an early setback, Guardiola and his players seemed to take affront at the merest suggestion of opposition and resistance. Any issues with physicality and mental burnout are inevitable after a pre-season that disappeared into the ether. But when these are the same mistakes that have been played out over the last couple of years with seemingly no attempt to correct them, the margin for forgiveness becomes an incredibly thin line.

It is at that stage that those same uncomfortable questions over the future of a man already in his longest coaching stint ever become increasingly unavoidable and relevant. Guardiola is already deep into uncharted territory. West Brom would at least offer a bit of peace and quiet.