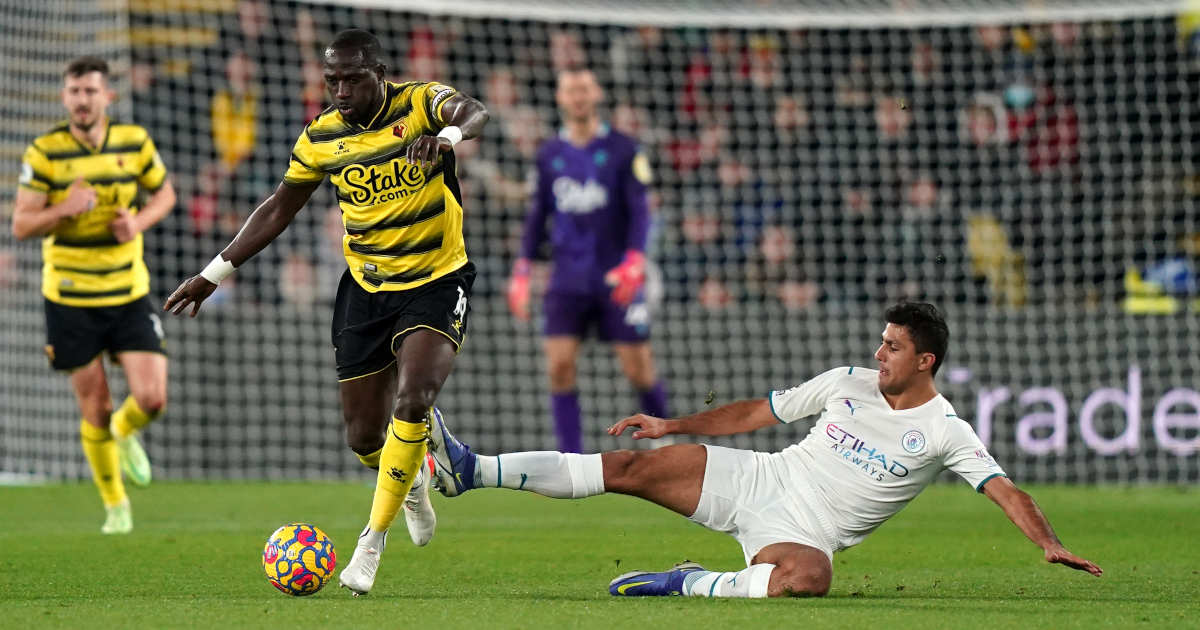 Manchester City breezed past Watford with considerable comfort at Vicarage Road to become the third Premier League leaders of the day.

As ever, when Watford took to the pitch for their home match against Manchester City, the title music to the television police drama blared out over the Vicarage Road public address system. Within 15 minutes of the start of the match, it felt somewhat as though a murder was about to be committed. By the final whistle, the Premier League had its third leaders of the day. It was another comfortable day at the office for Manchester City.

Chelsea had been at the top of the table at the start of the day, and it had looked as if they would stay there the entire weekend when they took the lead twice at West Ham. But instead, defensive profligacy cost them dear and they ended up losing that match 3-2, giving Liverpool the chance to leapfrog both City and Chelsea to go top. They obliged, eventually, with a goal in stoppage-time to earn them a 1-0 win against a Wolves defence that barely deserved to lose.

But Liverpool’s stay at the summit would not even last the hour. In the fourth minute at Vicarage Road, Phil Foden crossed from the left and Raheem Sterling headed back across Watford goalkeeper Daniel Bachmann and in to give Manchester City the lead. It was already their third opportunity of the match and the chances kept flowing, first for Sterling and then for the returning and apparently revitalised Jack Grealish. By the midway point in the half, he had wasted four good openings.

The second goal came from a counter-attack. Watford had the temerity to force a corner but couldn’t create a chance from it and City broke. Bernardo Silva fed Ilkay Gungodan and his shot was blocked by Bachmann, only for the ball to spin loose for Silva to lash it into the empty goal. With that, any remaining hopes – and they’d already been fading since about the second minute – of this being a competitive match of any substance got up and left. The remainder of the first half resembled a Manchester City kickabout, with Watford in a role that amounted to little more than that of interested onlookers.

The second half didn’t offer much different to the first. Watford did at least apply a little pressure in the early stages, but the lion’s share of the chances still fell to City, who were able to break at leisure when they did get the ball. Foden hit the post and Grealish struck the crossbar. Just after an hour had been played, Silva curled in a third goal from the edge of the penalty area, just to clear up any remaining doubt over where the points might be headed. Four minutes later, as if to underline the vast gulf in resources between the two teams, Pep Guardiola withdrew Grealish along with Gungodan, and replaced them with Kevin De Bruyne and Riyad Mahrez.

Watford did manage to pull a goal back, Cucho Hernández firing a shot off the inside of the post and reacting the quickest of anybody to force the rebound over the line. A couple of minutes later, Hernandez worked himself into some space on the right, crossing low for Josh King to flash a shot just wide of Ederson’s left-hand post. For a couple of minutes, it looked as if Watford might have even been able to somehow drag a grandstand finish out of this match, but it was all a bit too late for it to look convincing.

At least the home side were never going to get dragged into the bottom three as a result of this particular performance. Watford have had a horrendous run of fixtures since Claudio Ranieri arrived at Vicarage Road, but their results haven’t been uniformly awful. They scored five at Goodison Park and four at home against Manchester United after all. But they also conceded four at Leicester and five at home against Liverpool, and their defence remains their Achilles heel for the time being. On the basis of what we’ve seen so far this season they will continue having to look over their shoulders.

But this is the gulf between the top and the bottom in the Premier League. Chelsea losing to the team in fourth place in the table can be described as a ‘shock’, and Manchester City travelling to Watford has the feel of an FA Cup third round match. This is what much of the reminder of this title race will look like. Chelsea, Liverpool and Manchester City will have to keep winning if they’re to keep pace, because we can be reasonably certain that the other two will keep winning. There’s little between the top three at the moment, so little that they can all have a little turn at the very summit of the Premier League over the course of the same day.