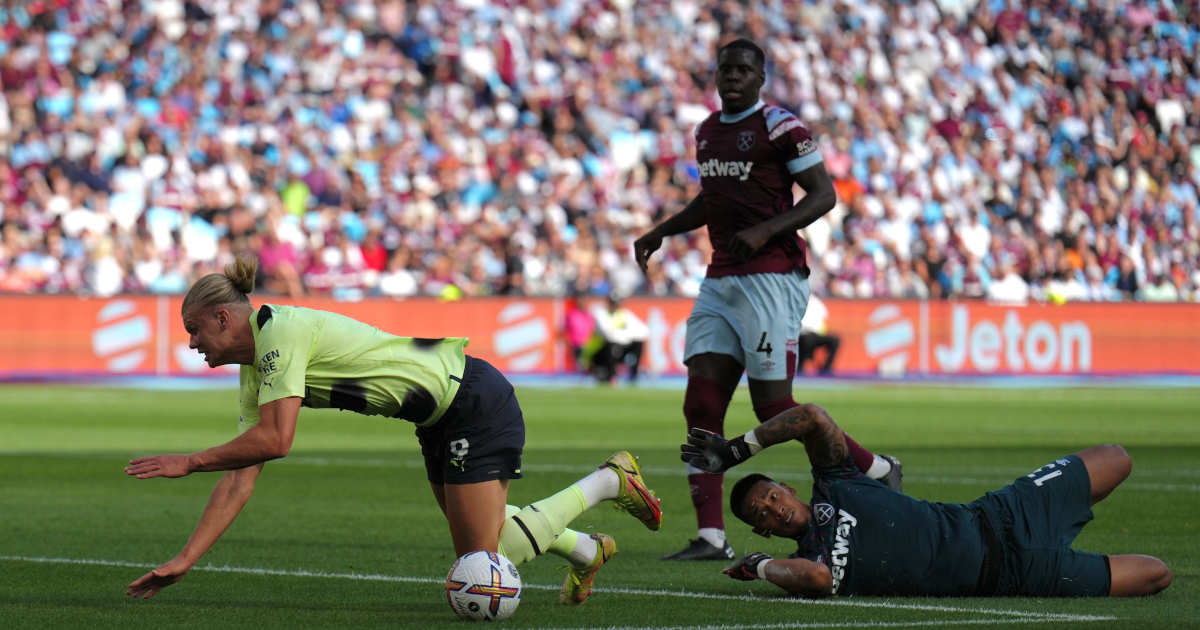 Manchester City and Erling Haaland only needed two moments to demonstrate why they will be such a potent combination in the Premier League.

‘Dour’ isn’t a word that you hear too much of in the modern Premier League, but back in the days when players used boots like clogs and balls like cannonballs, it was everywhere. In the gloom of the under-powered floodlights of the past, football in this country was played with a mood of steely determination, on pitches of sand and precious little grass.

Football isn’t dour anymore, but one of the last holdouts of dourness might be West Ham United manager David Moyes. He’s now the oldest manager in the Premier League at 59 years old, and while there are now no top-flight managers left who played the game professionally in the 1970s, Moyes started his with Celtic’s under-20 team in 1980 and his occasional hangdog expressions can occasionally feel like a callback to a different era.

But in the 21st century football is product. There’s little space for dourness anymore. Pitches of the colour and consistency of chocolate pudding being peered at through a fog of cigarette smoke and ledded petrol fumes don’t fit with the age of high definition television, and no football club represents this change better than Manchester City.

Fuelled by riches borne of fossil fuels in a far-off country, City have glinted and gleamed their way to five of the last six Premier League titles. They are a project, a world of luxury that would have been unrecognisable to anybody when David Moyes was plying his trade for Celtic. They are about marquee signings, and they are about control.

And in Pep Guardiola, they have a manager very much unlike David Moyes. Guardiola is only eight years younger than his West Ham counterpart, but when making his professional debut for Barcelona C in 1988 he was emerging into a different world. As a player, David Moyes won the Scottish Premier Division, the Associates Members Cup and the Third Division championship. Guardiola won the La Liga, the Copa del Rey, and the European Cup.

For the first 45 minutes of this match Manchester City were certainly in control, with 79% of possession and 697 passes to West Ham’s 189, but much of this possession felt of little consequence. West Ham’s defence had been sitting successfully deep for 35 minutes with few problems. Triangles came and triangles went, but City mostly huffed and puffed while West Ham soaked them up without too much difficulty.

But product football is all about ‘moments’ and marquee signings, and with nine minutes to play of the first half those two combined for the only moment of true significance in the first 45 minutes. The depth of the West Ham back line was such that the pass had to be perfect in terms of both weight and direction, and Ilkay Gundogan hit both, passing between two central defenders with the precision of an Olympic curler for Erling Haaland, the marquee summer signing (even if his fee wasn’t the highest), to run onto.

Haaland had been anonymous in his Community Shield debut for City a week earlier and was again for the first half hour of this match, but at the moment of Gundogan’s perfectly-threaded pass he let loose a near-frightening burst of pace, touching the ball past Alphonse Areola, and drawing the West Ham goalkeeper into a foul over which there was no debate. To complete his trick-shot, Haaland stepped up himself to send the goalkeeper the wrong way from the penalty spot with the only shot on target of the half.

This was why Manchester City signed Erling Haaland. He only has to do this or something like this once per match and he’s nudging 40 Premier League goals a season. And much as we might think that such numbers cannot exist in the Premier League, Haaland makes them feel more possible than anyone else.

After 62 minutes, West Ham had a shot on target. It’s wasn’t much of a shot on target – a daisy-cutter from Said Benrahma of no significant power that was gathered easily by Ederson – but it did turn up the volume inside the stadium after the 17 minutes of very precise, largely technically perfect, and somewhat boring football which had preceded it.

None of this is intended as a criticism of either team. Both were doing their jobs. Manchester City are control freaks, and they were controlling the game. West Ham were sitting back, because attempting to defend with a high line against Erling Haaland would be to sign a death warrant for their hopes of taking anything from the game, and other than the penalty, City chances had been few and far between.

But within four minutes of Benrahma’s shot City led 2-0, and this was why West Ham sat so deep in the first place; because to do otherwise is to allow Haaland space to run into more quickly than your defenders will be able to. But they couldn’t sit this deep until the final whistle. They had to push forward at some point if they wanted anything from the game, and when they did the punishment was almost immediate.

This time it was all over in three passes. Grealish to Rodri, Rodri to De Bruyne, De Bruyne through the eye of a needle to Haaland. Haaland finished with ease to quieten the rising noise inside the London Stadium and put the result beyond reasonable doubt, allowing the ball to roll across him before stroking it first time past Areola with one sumptuous touch.

He was withdrawn after 77 minutes, the game already sewn up. You’ve got to protect your assets. The rest of the game petered out in a flurry of subsitutions, and by the 90th minute there were a lot of empty seats inside the London Stadium. The game had been over as a contest for some time, so why not make it out before the rush?

There probably isn’t much to say about West Ham’s performance in their opening league game of the season. It’s hardly a fair way to gauge how they’ll play against weaker opposition, which may well turn out to be just about everybody else. West Ham defended successfully for an hour and showed that teams who sit deep can limit the number of chances that Manchester City create. But then they were filleted effectively twice, and once they were chasing the game they offered little indication of being able to haul their way back into it.

While David Moyes may be the Premier League’s oldest (and dourest) manager, his team could hardly be described as old-fashioned or a throwback. The problem – and this is far from an exclusive to West Ham – is that for all the simplicity of their football, that combination of relentless possession, control of the game, patience and geometric perfection can make Manchester City almost impossible to play against. Now, with City having reshaped the way in which they attack, it’s incumbent upon other managers to counter them. David Moyes, for all his experience, couldn’t quite manage it, and Manchester City have thrown down an ominous-looking marker for the rest of this season with this very comfortable win.