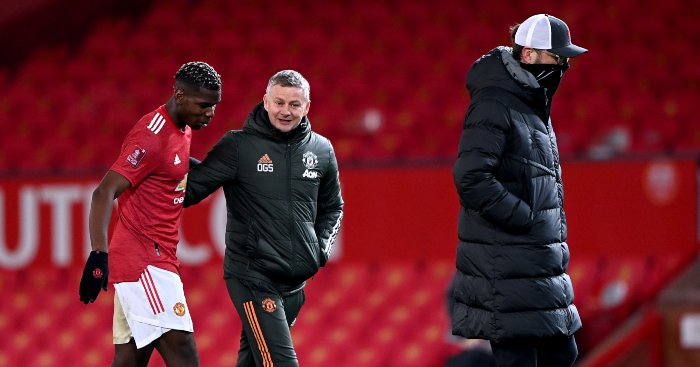 But until Sunday, he had never quite managed that final boss battle.

Plenty of us have been there yet the Norwegian had not been able to simply hand the controller to his older brother, lower the difficulty level or consult a cheat manual. He had absolutely held his own in four meetings with Jurgen Klopp, drawing three and losing only once to a Liverpool juggernaut at its most dominant, but never had he emerged as a true winner. Any victories were qualified, tempered or hollow, straws to grasp instead of crops to harvest.

This was as solid and whole as they come, and surely as satisfying as he must have imagined. The build-up to this game was full of typical misty-eyed nostalgia, of yearning for an era of blood and thunder buried far under the rubble of time and VAR. For once, the spectacle itself was entirely befitting.

Both teams were remarkably strong while understandably rotational to a degree. United started the faster. Liverpool scored quicker. By half-time they were level and the game was breathless, Roberto Firmino and Marcus Rashford comparing picturesque assists for thankful teammates.

The second period similarly swayed in terms of momentum. It shifted first to United, goalscorer Mason Greenwood this time turning provider for Rashford. For a while the hosts were in consummate control but as they passed around the back, Liverpool’s muscle memory kicked in. They swarmed and harried and pressed, James Milner retrieving possession from Edinson Cavani before dummying Firmino’s square ball to let Mo Salah score his second.

Much as when United took the lead, Liverpool cruised thereafter and looked the likeliest to win. But Solskjaer showed his hand, played his poker card and was soon celebrating a devilish free-kick from Bruno Fernandes.

It was a masterful and deserved victory, one that can be traced directly back to the coach even with the decisive individual quality that was introduced to settle the tie. United clearly focused heavily on and profited massively through switches that targeted Liverpool’s left-hand side. Andy Robertson attacked with verve but defended sparsely. Rhys Williams struggled in key moments. It was an obvious strategy but an effective one; Rashford’s first-half ball over the top to Cavani that Alisson barely cleared was a tantalising preview.

Paul Pogba was excellent in a more reserved role alongside Scott McTominay, starting the move that led to United’s equaliser by cleverly preventing a Firmino one-two on the edge of the area. Solskjaer’s man management of him has been impeccable, much as it has been with Luke Shaw, who was phenomenal on the left before fading. Donny van de Beek showed flashes of promise in a system designed to focus on the break.

The removal of the stalemate safety net that undermined their Premier League meeting made for a far better spectacle but also a much more expansive approach. Solskjaer thrived in that environment. He devised a plan to win, the players implemented it well and when outside inspiration was required, he had the perfect man to call on.

With that, he completed the set and added another notch to an expanding bedpost. Some hurdles remain, such as semi-finals, a sustained title challenge and a victory over Tim Sherwood, but Solskjaer has grown into this role far better than even the greatest optimist expected. The P.E teacher was over-promoted initially but there is no-one left that he hasn’t at least taught a one-off lesson to.