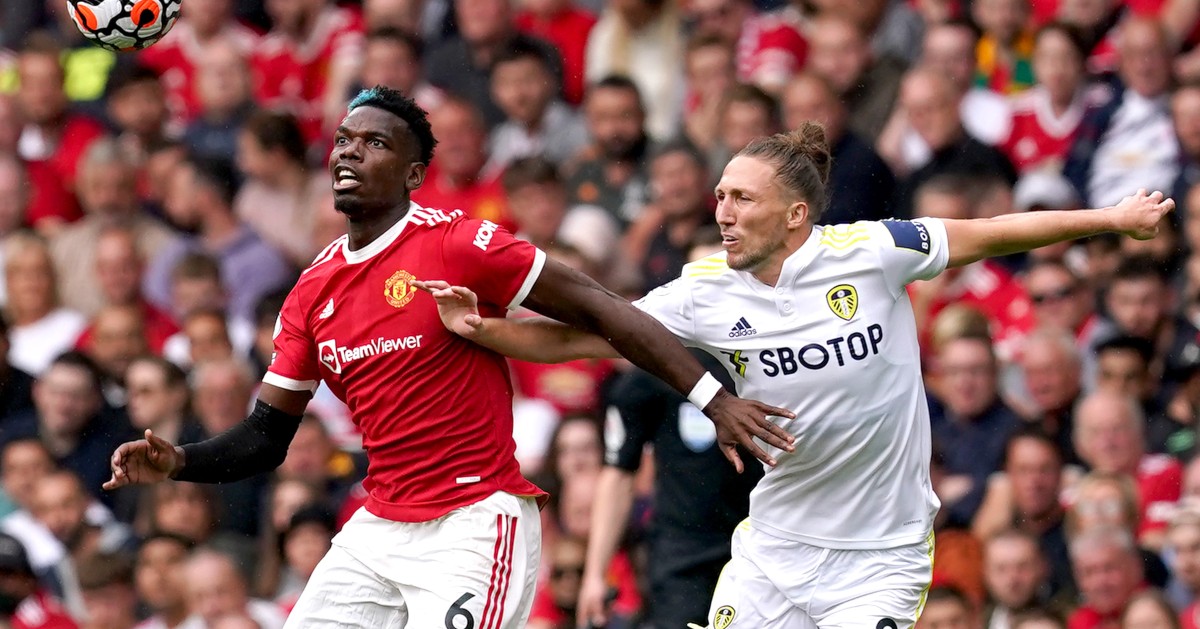 Man Utd have made a statement, parading both their new signings in a dominant win. Paul Pogba and Bruno Fernandes were something else.

The only change Ole Gunnar Solskjaer might have made to the script would have been in the punditry line-up. Then again, even a live humble-pie tasting experience with Graeme Souness could hardly make this homecoming sweeter. It was almost note perfect otherwise: Manchester United, back in front of a raucous and packed Old Trafford and inspired by a Bruno Fernandes hat-trick, dismantling a bitter rival to such an authoritative extent that Fred scored and both their summer signings could be paraded in rather different and yet equally effective ways.

Jadon Sancho was introduced with a quarter of an hour to play, those usual debut nerves assuaged by a celebratory atmosphere comprised of the unique circumstances and a freak scoreline. The ambience of a positive afternoon was only heightened from the start when Raphael Varane was flaunted on the pitch. The supporters strangely seemed not to care that he does not possess the same Premier League experience as Ben White. Friday evening showed that is not necessarily a bad thing.

From then on, Manchester United were rarely interrupted from their revelry. Leeds had a few early sighters, Mateusz Klich and Jack Harrison testing David de Gea’s concentration more than his reflexes or acumen. But when Scott McTominay, Paul Pogba and Fernandes combined for the opener after half an hour, the tide seemed focused only one way.

The goal did not seem to belong in this game. It was measured, exact and meticulous against a backdrop of chaotic imprecision. These two teams somehow mesh perfectly yet clash inherently in terms of styles when they meet. Every manager will have particular tactics for each opponent but Solskjaer and Marcelo Bielsa rarely seem to venture much further out from their comfort zones than when they meet one another.

Home supporters likely did not expect to see McTominay, Fred or Daniel James starting games in the Premier League when last season drew to a close, never mind all three featuring together so heavily in the first match of the campaign. The absence of Kalvin Phillips moved Robin Koch into midfield, to be later joined by Stuart Dallas when Rodrigo was substituted at half-time for Junior Firpo.

That seemed like a masterstroke from Bielsa at first. Within four minutes of the second half, Leeds were level and Old Trafford was largely silenced, save for a sizeable chorus of Marching On Together. But the equaliser was no carefully devised training-ground move: a short throw-in found Dallas who shifted the ball onto Luke Ayling, the right-back embracing the lack of anyone closing him down to hammer one inside the right post.

It was a thunderbolt, and most definitely from the blue. Manchester United had been close to cruising. That sort of goal has crushed them before. In this instance it awakened something immense.

That gave way to a 20-minute spell of glorious interchanges and the sort of irresistibly flowing moves that have often been absent under Solskjaer. These were the patterns of play, the moments of natural instinct coupled with muscle memory and innate talent, he needed to impose. Goals of absolute quality, not just moments of inspirational brilliance separate from the team dynamic.

Pogba took hold. His pass for Greenwood’s goal was exquisite in idea and execution; the finish came close to matching it for excellence. Then Fernandes had his second, Pogba slowing the tempo, manipulating the defensive shape and allowing the Portuguese to take advantage in brilliant fashion.

His hat-trick goal was perhaps the most aesthetically pleasing of all, collecting Victor Lindelof’s raking pass and firing it first-time into the roof of poor Illan Meslier’s net before Fred added that emphatic fifth from Pogba’s pull-back.

If this is to be the Frenchman’s attitude and application during a final year before departing next summer, Manchester United will take the hit of their record signing leaving as a free agent. He could still extend his contract but a season-long farewell tour at this level is a tantalising thought.

Leeds were jubilant at 1-1 in the 49th minute. By the 68th and at 5-1 down they had been thoroughly chastened by a team operating on a different plane. It will seem like scant consolation now but if Manchester United can harness this sort of mood, they will do even worse to plenty of other teams this season.