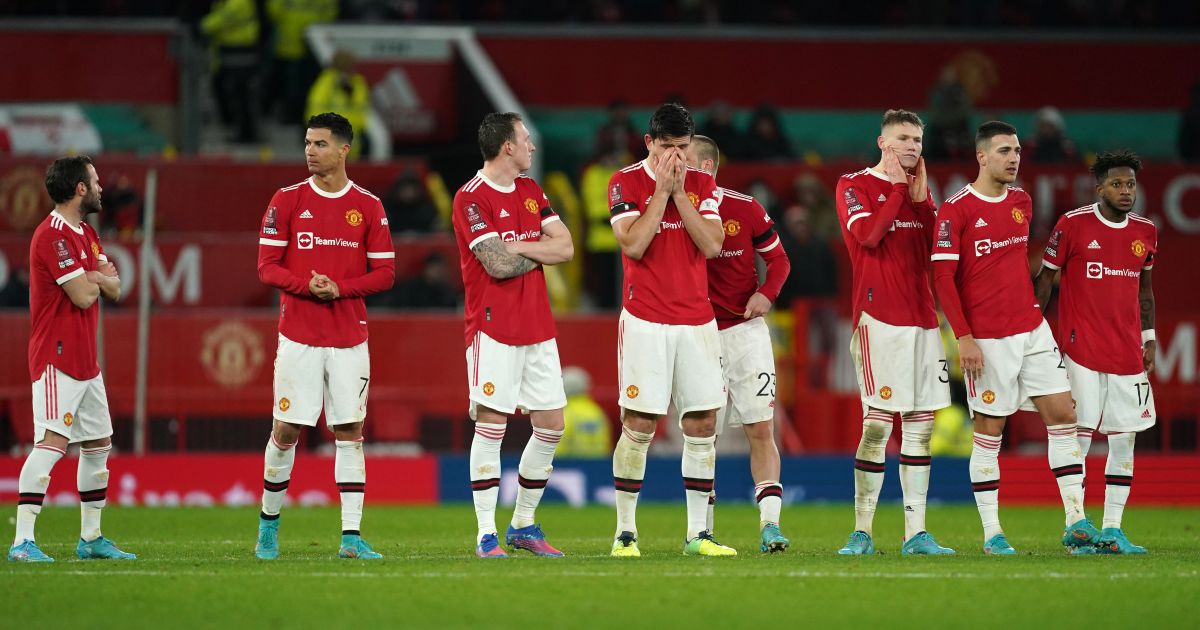 Controversy over Middlesbrough’s equaliser shouldn’t detract from Manchester United’s own culpability in their FA Cup exit.

Manchester United haven’t won a trophy since 2017. Unless they win the Champions League, they will not be winning one in 2022 after crashing out of the FA Cup at home to Middlesbrough on penalties.

It’s a pretty shameful record for a club of United’s status and an indictment on decisions that have been made along the way. Nobody wants to be the member of the big six with the second-longest trophy drought, it’s embarrassing.

As too was this performance against Championship opposition. Manchester United will point to the controversial nature of Middlesbrough’s equaliser. We’ll get on to that later, but the simple fact is this. You cannot be Manchester United, at home, over 120 minutes, against a team from the Championship and then when you get knocked out complain that you’ve been hard done by.

Jadon Sancho, who until getting injured late in normal time and inexplicably playing on into extra-time to make it a bit worse had been comfortably United’s biggest bright spot of the night, missed a great chance inside the first 90 seconds. Ronaldo dragged a penalty pitifully wide. Bruno Fernandes volleyed over when he and Boro keeper Joe Lumley were the only men in the penalty area. All that happened in the first half an hour.

Even after the equaliser, Fernandes missed another sitter when hitting the post having been presented with what amounted to an open goal from 18 yards.

I think we’ve laboured the point enough now to make it clear. Even if Boro’s equaliser shouldn’t have counted, United should have ensured it didn’t matter. That is their failure. Their own inadequacies did far more to shape this game than a philosophical discussion about the free will of Duncan Watmore’s left arm.

For what it’s worth – and other opinions are certainly available – the decision of no handball seemed to me the correct decision based on the current wording of the laws but feels like the wrong decision. Watching it, and the way the touch on the hand is so crucial in Watmore retaining control of the ball, some instinct for football fairness in your brain tells you this is handball and shouldn’t be allowed. The fact it wouldn’t have counted had Watmore himself scored rather than merely assisting the goal only adds to the daftness. It’s Schrodinger’s handball, and shows that we’re still as a sport slightly chasing our tails when it comes to VAR. Every now and then a goal comes along that stress-tests the system, so we change the rules to make sure that specific thing doesn’t happen again. This in turn creates another daftness down the line.

Maybe we just can’t have flawlessly consistent decision-making in a sport many of whose laws require subjective judgements.

Offside and handball have formed the two key battlefronts of the VAR war and both have shown up different things. With offside, the law is fine but the technology isn’t. With handball, it’s the other way around. The only way to eliminate almost all subjectivity from handball is to make it a strict liability offence in which all intent is irrelevant. You shouldn’t need me to tell you how quickly and, for a short while at least, hilariously that would ruin things.

There would certainly be a lot more penalties for Ronaldo to miss, that’s for sure. There were 16 spot-kicks in the shootout here, and that would probably be about the average for any game in the brave new rigorously consistent yet absurd sport that we’ve probably already given too much thought and certainly too many words.

Where were we? Oh yes, laughing at Manchester United. For an hour, they were pretty good apart from the profligacy in front of goal. It was frustrating that a second goal was proving elusive, sure, but it still felt like it was coming and, beyond the inherent ‘sod’s law’ reflex known to all fans, little reason to fear or suspect that its absence would cost United.

They were playing some nice enough stuff, Sancho especially, and Boro were scrapping hard and staying alive in the game but not much more. Then it all changed and that, as much as the ultimate result, is the worry for United. For the second hour of this 120 minutes they were pretty poor, certainly no longer the better side. Duncan Watmore’s introduction reinvigorated Boro and United were first caught by surprise and then unable to react.

That’s a major concern. This was a strong Manchester United side and they struggled to respond to a lesser opponent who suddenly sensed among the assorted missed opportunities at the other end that this might just be their night.

United have gambled on Ralf Rangnick being able to get enough of a tune out of this squad to win an undignified scrap for fourth and salvage the bare minimum from the season. They might well do so, and there are reasons enough to look at their major rivals for that spot and consider that United are no flakier than the others. But on a night like this it’s really not hard to see Antonio Conte’s sheer force of will or West Ham’s refusal to accept reality or Arsenal’s eight remaining footballers beating them to it.

An FA Cup win wouldn’t make up for missing out on that all-important Big Cup spot but it would represent tangible reward and end that trophy drought. It would also be useful if a Manchester United goalkeeper saved a penalty in a shoot-out every once in a while.

It’s a great night for Boro, but United have some serious soul-searching to do.