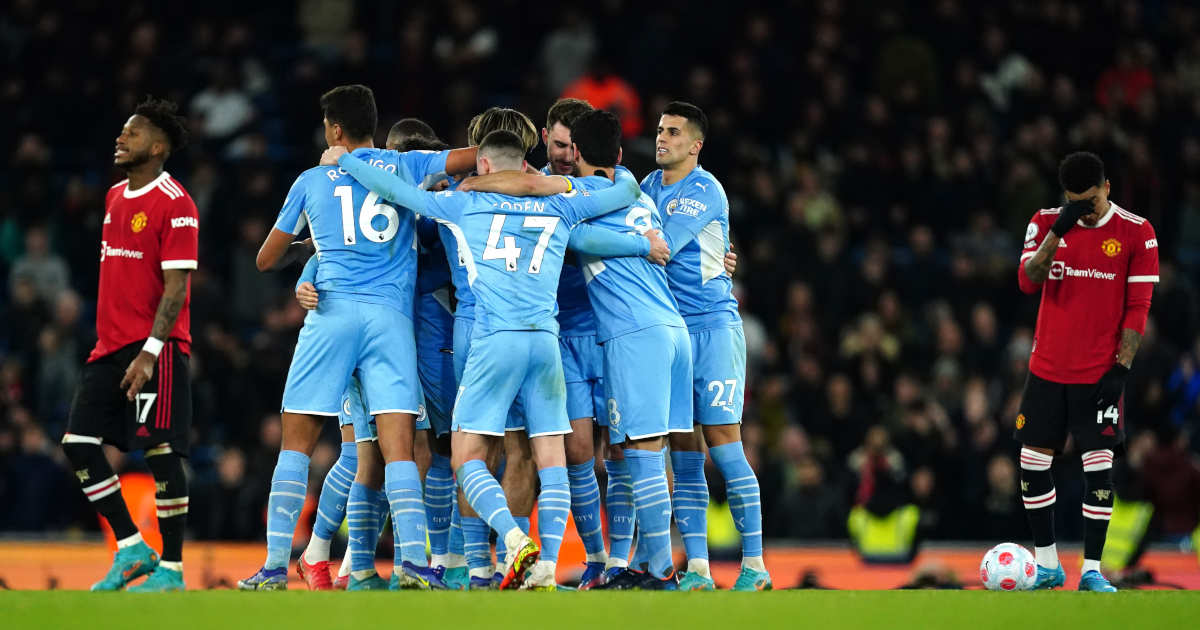 Manchester United appear trapped between the vision of what fans want the club to be and the reality of where they are.

As the dust settles on another Manchester derby, the obituary writers have been sharpening their pencils for Manchester United’s season. This, it feels, was a pivotal weekend in the race for fourth place in the Premier League. None of the results were particularly surprising – would anyone have predicted Arsenal to do anything but win at Watford or for West Ham or Manchester United to do anything but lose at Liverpool and Manchester City respectively? – but the conclusions are difficult to avoid; a point behind Arsenal and having played three games more, it is difficult to believe that there’s much realistic chance of United finishing above fifth place in the table.

But while March is a time when the entire football schedule starts to become about the present and the immediate future, Manchester United’s decision to hire Ralf Rangnick on an interim basis means that they remain in a position of developmental stasis until the end of this season. And the obvious question to ask about United at the moment is… what does now happen at the end of the season? Because missing out on the Champions League may have a significant impact on the club’s ambitions for their next scheduled rebuild.

Being Manchester United gives you significant advantages over other clubs. The pull of playing at Old Trafford in a red shirt can be such that people will want to play for them, regardless of where they might currently be in the league. But the reality of modern football is that, for a club of United’s size, the Champions League is the place to be, and the same applies to the calibre of coach and player that they wish to attract to the club.

One player who United would dearly like to attract, for example, would be the mercurial talent that is Erling Haaland, but it seems inconceivable that Haaland, who is without question one of the best strikers in the world, would have much interest in joining a club that would not be playing in the Champions League next season. If he is to move on from Borussia Dortmund, he would be looking to make a step up, and the reality of the position in which United find themselves is that moving to Old Trafford would not be a step up in the same way that a move to, say, Manchester City or Real Madrid would be.

The same goes for whoever Rangnick’s replacement might be, when he makes his move upstairs into a ‘consultancy’ position at the end of this season. The speculation remains centred on Erik Ten Hag and Mauricio Pochettino but, as managers with no previous emotional connection to Manchester United, neither of these two are going to be more attracted to Old Trafford by the club not being in the Champions League.

It’s all very well to come up with fine words about ‘projects’ and ‘rebuilding’, but coaches need time, space  and money, and such is the perpetual state of hysteria that surrounds this club that getting that time and space may well prove to be impossible, while the way in which Manchester United have spent money in recent seasons doesn’t offer too much hope that they’d be able to spend strategically and intelligently, either.

And then there are the players. The pre-match build-up to the Manchester derby was dominated by a player who end up taking no part in the match whatsoever, and where United go from here regarding Cristiano Ronaldo is an open-ended question. It should be straightforward enough to integrate him back into the team for the remainder of this season, but should his ongoing presence at the club be a problem, where exactly can they offload a 37-year old who’s on half a million pounds a week?

It seems doubtful that the sort of clubs who can afford his wages in Europe would be particularly interested in taking him on; a move to somewhere like MLS would make sense for all concerned, but United would have to continue to fund a sizable proportion of his wages for the second year of his contract. Perhaps the senior management of this club would be happy with this. Perhaps the social media optics are the only numbers that matter to those running the club. Perhaps adding Instagram followers was the only reason they signed him, and they’re happy with the extra profit he’s brought. But it’s precisely this sort of thinking that has put the club in the predicament in which it finds itself today.

There do remain causes for optimism. United are still in the Champions League, and secured a decent result from their round of 16 first leg against Atletico Madrid. And while Arsenal have been grinding out results of late, the nature of the teams below the top three in the Premier League all season has been to drop almost as many points as they’ve been picking up. It’s likely, for all their current (and deserved) plaudits, that Arsenal will drop points from their final 13 games of the season. Being a point behind them and having played three games more looks like a bad position to be in, but that race isn’t quite completely done and dusted yet.

And while there has been much talk of the malfunctioning parts in their team, it is also worth remembering that there have been a couple of causes for cautious optimism. Jadon Sancho took a while to get going, but in recent weeks he has started to show the form and consistency to validate spending £73m on him last summer. His goal at The Etihad was a brief flickering of the Manchester United that the club’s supporters want to see, and his form and consistency have both definitely improved since a slow start to the season. Elsewhere, the breakthrough of Anthony Elanga has been a sign of what the club’s youth system is capable of producing, even if he is far from the famed ‘finished article’.

But these are isolated spots of brightness at an otherwise gloomy football club. It says something for where Manchester United are at the moment that some of their fans will be reading this and adding to the list of work that needs to be done at the club, from completely rebuilding their chaotic-looking defence to the now-long-overdue renovation work at Old Trafford. And this is the club’s position right now, trapped by the bad decisions of the last few years and the cost of what needs to be done likely to be huge, and with few guarantees that any future spending will even be carried out wisely. The dust may have settled on the Manchester derby, but with the likelihood of Champions League football next season looking increasingly remote, it’s starting to look as though even the rebuild that will clean it all away at Old Trafford could be far from straightforward.