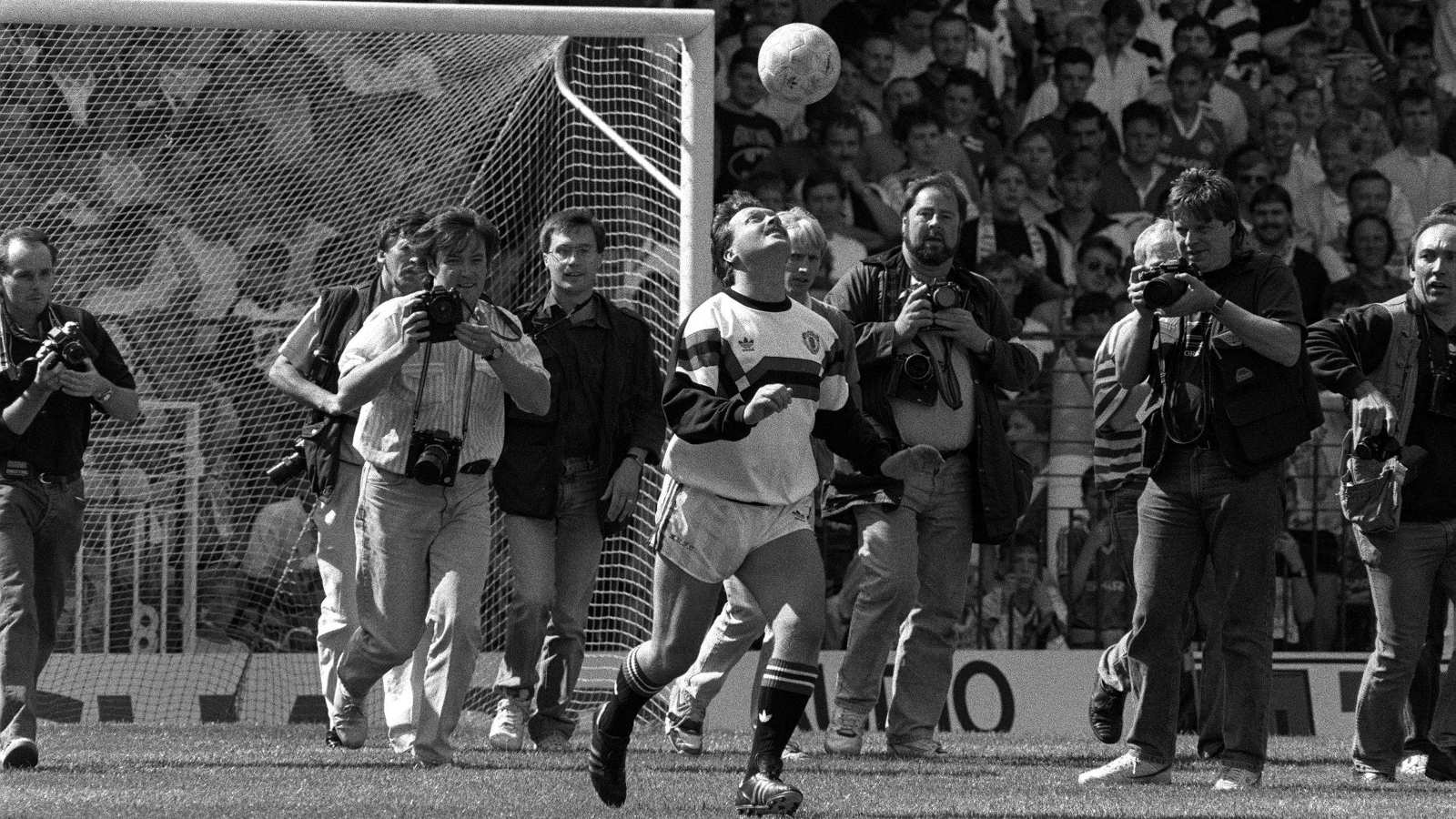 The fans are desperate for Manchester United to be sold, but a Michael Knighton takeover would be like jumping from a frying pan into a fire.

It already feels as though this is going to be a winter of discontent at Manchester United. Losing their first game of the season seems to have been the catalyst for a renewed attempt to get the Glazer family out of Old Trafford once and for all.

There are already plans for a mass protest during their game against Liverpool – though how successful that might be is debatable, to say the least – but the rumour mill is already speculating that attempts to prise the club from its owners could be coming about sooner rather than later.

Sir Jim Radcliffe, commonly referred to in the media as ‘Britain’s Richest Man’, submitted a bid to buy Chelsea at the end of April which was dismissed out of hand. When he was asked at that time about his reported support of United he described his interest in them and the Blues as a ‘split allegiance’.

There has been considerable speculation surrounding the possibility of him making a bid to buy the United.

But the other name to have been thrown around over the last couple of days has been a blast from the club’s past, a callback to another time when their condition didn’t look so great.

Michael Knighton is a name indelibly linked to one of the most bizarre publicity stunts that the club has ever seen, an act of self-publicising hubris that preceded a very public fall.

At the start of the 1989/90 season Manchester United were in an even more moribund state than they find themselves today. It had been 22 years since they last been the champions of England, and big money signings in the early to mid-1980s hadn’t significantly improved the club’s fortunes.

They’d won the FA Cup three times in the previous decade, but Liverpool had been far away at the top of the table over most of this period.

Alex Ferguson was appointed as manager in 1986, but he’d yet to deliver any silverware and his position was believed to be far from secure. A slump in the latter stages of the 1988/89 season saw United drop to a final position of 11th, scoring just 45 goals in 38 league matches, their joint worst final league placing since relegation 15 years earlier.

When the team took to the pitch for their penultimate home league match of the season against Wimbledon, just 23,368 people – considerably below half of Old Trafford’s capacity at the time – turned out to watch.

Supporters were clearly voting with their feet.

But there was still optimism in the air at the start of the following season. Manchester United had purchased Gary Pallister, Danny Wallace, Neil Webb and Mike Phelan during the summer; Paul Ince followed in September. And their first home league match of the campaign against Arsenal attracted a crowd of more than 47,000 people, a huge increase on the prior Wimbledon game and more than 10,000 up on the previous season’s average.

The day before the start of the season, an announcement by a hitherto unknown 37-year old businessman had shaken the club. Knighton announced that he was taking over Manchester United, even appearing on the following lunchtime’s Football Focus to reaffirm the point.

United supporters who turned up well before kick-off for the Arsenal match witnessed a publicity stunt that is still remembered more than 30 years on. Before a phalanx of photographers, Knighton took to the Old Trafford pitch in a full kit (with training top), juggled a ball a few times and then ran to the Stretford End and kicked it into the goal there.

The details of the bid were a reflection of the position of the club at the time. Chairman Martin Edwards, who’d taken over the running of the club from his father Louie, was deeply unpopular and rumoured to be looking for a way out. Talk of a breakaway Super League had gone nowhere and the Hillsborough disaster of April 1989 meant that expensive renovation work at Old Trafford was going to be necessary, while English clubs were still banned from European competition.

In that brief period between Hillsborough and the 1990 World Cup, few knew with any certainty what the future of the game might be. It was, therefore, not quite as surprising then as it seems now that the price to buy Edward’s 50.6% shareholding in the club was £20m: £10m for the shares and the same again as a financial commitment towards renovating the stadium.

And Knighton wasn’t acting alone. He was backed by the former chief executive of Debenhams, Robert Thornton, and Stanley Cohen from Parker Pens.

But his decision to show off his skills in front of the Stretford End – Knighton had been a youth apprentice with Coventry City in his younger days – turned out to be a big mistake. On that day’s Grandstand, host Steve Rider described him as the club’s ‘new owner’, but in truth the deal was far from done. Thornton and Cohen withdrew their financial support, the press was heavily critical (the Daily Mirror’s owner Robert Maxwell had had a bid for the club rejected by Edwards) and the directors were nervous about all the attention.

In the end, he was offered a place on the board, which he held until 1992, but the takeover never went through.

Knighton wasn’t done with football, but his next involvement in the game would come in somewhat more humble surroundings at Carlisle United, where he spent a decade.

The club was initially successful under him, but things soon started to head south. In 1996 he threatened to sue the local newspaper, the Evening News and Star, and resign from the club after being ‘publicly humiliated’ over claims he and his wife Rosemary had seen a UFO in 197. At the start of the 1997/98 season he sacked manager Mervyn Day and installed himself in his place.

Knighton stayed in this position until the end of 1998, by which time Carlisle’s future in the Football League was in doubt. He handed over the reins to a rookie by the name of Nigel Pearson.

When Knighton allowed goalkeeper Tony Caig – who’d made more than 200 appearances for the club – to leave on transfer deadline day, Pearson had to bring in an emergency signing goalkeeper to replace him.

Jimmy Glass arrived on loan from Swindon Town, with Carlisle near the bottom of the table and facing relegation from the Football League. But at home against Plymouth Argyle on the last day of the season needing a win to stay up, Glass went up for a corner in stoppage time with the score tied at 1-1 and scored one of the most memorable last minute winners of the decade. Scarborough were relegated instead.

So Carlisle were saved, but Knighton’s time in Cumbria was coming to an end. He resigned as a director in 1999 despite keeping hold of a 93% shareholding in the club, but in September 2000, Leeds court banned him from being a director or being involved in the management of any company for five and a half years over finanical irregularities at a private school he’d been running during the 1990s.

When Carlisle’s financial problems became so great that the club had to be put into administration in July 2002, Knighton finally sold up. He hasn’t been involved in running a football club since.

Is Knighton a fantasist? Well where would anything like the amount of money to buy Manchester United be coming from? There doesn’t seem to be much indication.

And talking about a ‘hostile takeover bid’ is all very well, but if there is financial backing behind him to the tune of billions of pounds – which would be necessary for a sale of this size – why would the backers want him fronting a bid for them? Is he merely hoping to hitch a ride on the Ratcliffe train?

Perhaps Knighton is best utilised by Manchester United as a reminder that things actually can always get worse. The 1988/89 season had been a poor one for the club, and after his performance in front of the Stretford End, United took the lead inside two minutes against the champions and went on to beat them 4-1. But this turned out to be a false dawn. United ended that season in 13th place in the First Division, a new worst league finish since the 1974 relegation.

For all the speculation surrounding Ratcliffe, there seems little actual evidence of interest on his part beyond wishful thinking. He’s  expressed interest in buying a Premier League club before and owns OGC Nice in France, but this amounts to little more than circumstantial evidence in terms of United’s current situation.

The fact remains that, for all Knighton’s talk of ‘hostile takeover bids’, these remain difficult to achieve.

In bypassing the directors of the club and going straight to the shareholders, it’s inconceivable that a huge premium wouldn’t have to be paid, and there’s been little indication that such a move would be successful. Quite aside from anything else, it would be phenomenally expensive, likely to the tune of several billion pounds.

That’s the reality of where Manchester United are in 2022. The shareholders don’t have to sell to anyone and the directors aren’t interested. If the club is to be sold, it will require more than this sort of vagueness to get the ball rolling.

It still seems as though Manchester United and the Glazers will remain tied to each other for the time being, but it also seems equally certain that the anger and protests will continue until they leave. It’s not an intractable situation, but it seems little closer to resolution than it has been at any other point over the last 17 years.