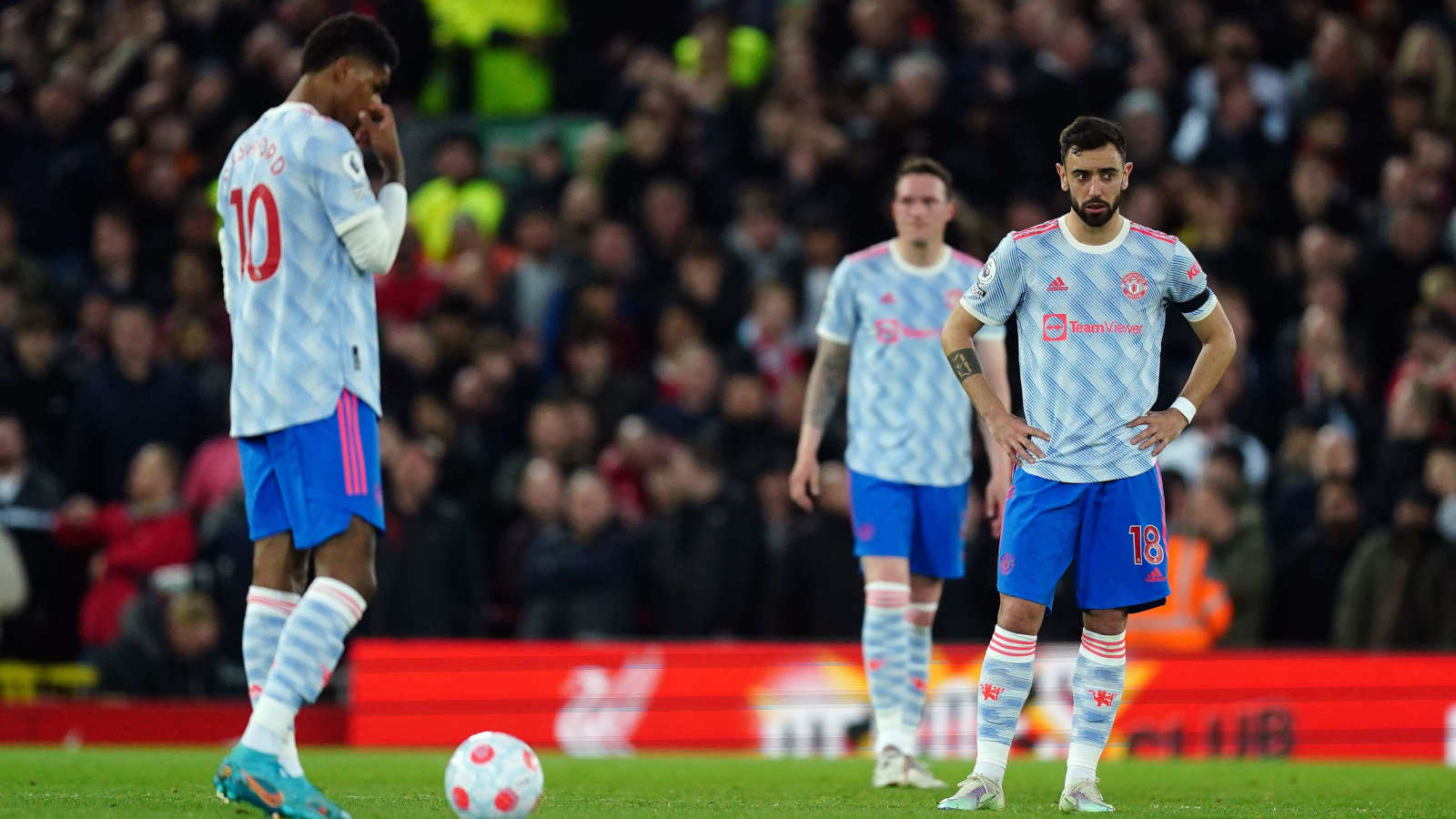 There have been lows for Manchester United supporters over the last nine years, but losing at Anfield in the way they did felt worst of all.

For fans of clubs other than Manchester United, a thought experiment: imagine for a moment that your team has two rivalries. They’ve both always existed but they’re very different to the other. One is with a side from the same city as yours. It’s periodically been vicious in the past, but as the more successful club, it was never an equal relationship.

The other rivalry is the one that still feels more vital, even though the team concerned is from a different place. That rivalry taps into something deeper and more primal; a feud that pre-dates professional football, stretching back to the peak years of the Industrial Revolution. They wear almost the same colours. Middle-aged supporters can still remember when they lorded it over you. But your team turned it around and spent even longer lording it over them.

Those days seem like a long time ago now. The city rivals won football’s equivalent of the Euromillions – new owners with bottomless pockets and an ambition to ultimately own all of the game. The origins of that money may be shady, but it’s difficult to argue that it hasn’t been spent well. They have a generation-defining coach and a team that makes those who see them purr.

And the days of browbeating those other rivals are definitely over. Your lot still had the wherewithal to be able to put out a big performance against them – these matches have usually been tight, no matter what the general condition of the teams – but no longer and they have also overtaken you. They also have a generation-defining coach and a team that can take the breath away from those who watch them.

These two teams aren’t just the best in England; they might be the greatest in Europe. But all the time this has been happening, your club has been in stasis, with owners more interested in the bottom line than the football, and with hundreds of millions of pounds having been frittered away on a series of malfunctioning parts. They are the epitome of a team considerably less than the sum of its composite parts.

There have been a couple of pots over these years, but mostly it’s been rudderless drifting and all the while, those two rivals are disappearing into the distance. The reasons to believe that things are definitely going to improve are being replaced by the nagging worry that perhaps this is just how things are now. There seems precious little reason to believe that they will improve. Another new manager is due in the summer but, well, you’ve been there before.

Footballer supporters have few entitlements, but they are allowed to expect their team to try; the most damning take away from Manchester United’s trip to Anfield is that the players didn’t seem to care. Paul Pogba limping from the pitch after 10 minutes may have been a genuine injury but he didn’t seem particularly bothered and it wasn’t a strong look regardless. Marcus Rashford again didn’t seem to want to be there. Harry Maguire is now a perpetual accident waiting to happen. While Liverpool’s players arranged themselves into a dizzying array of ever-changing geometric shapes, always two or three steps ahead of where the ball was going to be, United’s was a splodge, an amorphous splat across the 40 yards in front of their own penalty area.

This wasn’t so much a ‘match’ as a series of visual metaphors for failure all layered on top of each other, from Alisson’s early Cruyff turn to the decision to bring on a Sideshow Bob lookalike called Hannibal just past the midway point in the second half. He spent 20 minutes haring around kicking people and picked up a yellow card which might have been a red. He was, by some distance, the best Manchester United player of the evening.

🚨🎙• Gary Neville on Hannibal: "Maybe he doesn't like the idea of Liverpool players passing it round him. I wish the rest of them were the same." [sky] #MUFC 🇹🇳

At least the fallout from this debacle seems to be that the players are finally coming under the scrutiny they’ve seemed able to swerve for a very long time indeed. Because questions do need to be asked. What the hell sort of Manchester United player can’t raise their game for Liverpool? How did they come to take to the pitch at Anfield, of all places, with the gait of people who looked as though they’d already lost in their heads? This squad of players is living down to the worst stereotypes of how people who don’t like football perceive footballers to act. It’s not difficult to wonder whether some United players believe themselves to have signed for Harchester United rather than Manchester United.

This result certainly can’t be taken as an incident in isolation either. If anything, Manchester United’s aberration wasn’t even the worst they’ve played against Liverpool this season. When they met before in October, Liverpool went 5-0 up in 50 minutes at Old Trafford before taking their foot off the gas. 9-0 on aggregate is the worst deficit they’ve had over two games against any league opposition since 1892/93, and their second worst ever. Their two matches against Manchester City went little better: a 2-0 home defeat and a 4-1 loss at the Etihad Stadium.

9 – Manchester United have lost 0-9 on aggregate in their Premier League meetings with Liverpool this season. In their league history, they’ve only suffered a combined heavier defeat once – 0-11 vs Sunderland in 1892-93. Trounced. #LIVMUN pic.twitter.com/ot2bQCn1Er

Manchester United have remained in thrall to the cult of the manager in recent years, and that’s unsurprising. They did, after all, win 18 of their 20 Premier League titles and all three of their European Cups under just two bosses. Manchester City and Liverpool have both proved that the cult of the manager is still real, but the problem with adherence to this script is that finding that generation-defining coach isn’t easy; to achieve that status can require the alignment of so many stars that it can look accidental from a distance.

And it can take time. Bill Shankly needed five years to lift his first league title with Liverpool. For Alex Ferguson it was seven. Even Jurgen Klopp required four. Pep Guardiola still hasn’t won the Champions League with Manchester City. But after nine years do Manchester United have any patience left? The club is under a constant glare of scrutiny, all too frequently at the centre of a whirlwind of tabloid-friendly rumour and counter-rumour. The leaking from the club can be, in more than one sense, titanic.

Everybody knows that the edifice is rotten from top to bottom, but it does still make money and the only people who can’t be fired are those who are making it. Protests against the owners have come to nothing because they are never going to sack themselves – certainly not while they’re profiting from the club and returning handsome dividends to stockholders.

There’s also a thought you’ve been trying to suppress to the back of your mind: that the worst of this season is probably yet to come. One of them will win the Premier League, and although you can pick at reasons why one of them doing so might sting a little less than the other, to be in this position in the first place is sub-optimal. And it doesn’t end there. They’re both in the semi-finals of the Champions League. They might meet in the final. Liverpool have already won one trophy this season and might yet eclipse your club’s greatest achievement.

Will Erik ten Hag really be able to fix these players? If the entire guts of the first-team squad do need to be ripped out, who on earth replaces them? How long will this take? How much might it cost? How much further might Manchester City and Liverpool disappear into the distance? Which other clubs might come to overtake them too? Is this just the way things are now?

And this is something that you do in your spare time, you increasingly find yourself thinking.