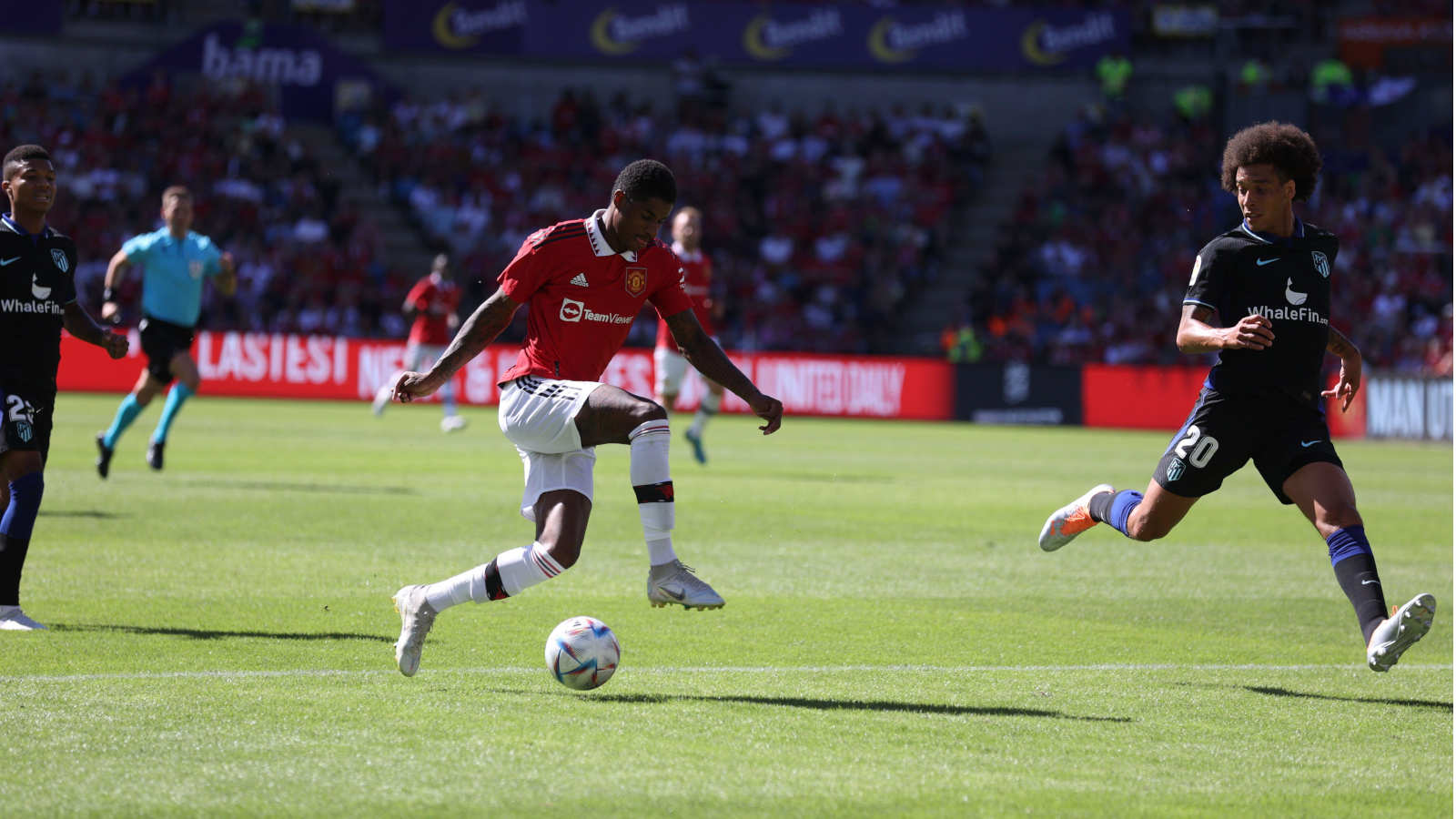 Marcus Rashford had a start to the season which suggested his issues with form haven’t yet been resolved. A fresh start would do him good.

There was a time when brows would furrow when conversation turned to the matter of whether Bukayo Saka or Marcus Rashford should be starting up front.

It was briefly the Lampard vs Gerrard of the TikTok generation. Which should it be in attack for England? Could both be accommodated in the same team? Both missed a penalty in the shootout at the end of the Euro 2020 final at Wembley and both were subjected to the most appalling racist abuse afterwards.

But a year on, the paths of these two players could not have diverged much further apart. On the first weekend of the Premier League season the differences seemed as marked as ever.

For Arsenal against Crystal Palace in the first match of the league’s season, Saka wasn’t quite firing on all cylinders but was effective nevertheless. At this time of year, transfer bedlam can make it easy to forget the talent already at your club’s disposal.

On Sunday afternoon at Old Trafford, Marcus Rashford played for Manchester United with the facial expression of someone who couldn’t make sense where he was or what he was doing.

It would be an exaggeration to say that he seems to have forgotten how to play, but this sometimes almost did seem to be the case. And that it might be ending like this is sad in its own way.

Rashford is from Manchester and came through their youth system. Every supporter knows that a player who does that is a bit special, and to see his time at Old Trafford now seemingly coming to some sort of end marks the closing of a chapter that might have ended very differently.

The good news for him is that at 24 years of age he still has the time to rebuild a career elsewhere, and he is exceedingly fortunate that there may be interest from PSG.

It’s difficult to think of many other players who need a move away from a club more than Rashford at Manchester United. There has already been considerable speculation about what the causes of this may be, but the very fact that the player himself seems more than agreeable to leaving for Paris tells a story in itself of what Rashford believes will revive a faltering career.

There could certainly be potential issues with getting such a transfer finalised. Rashford has just a year left on his Manchester United contract, but the club has the option to extend his deal for a year and has had a habit of doing this in the past. It has been speculated that this is routinely carried out to maintain a higher transfer fee and increase the value of the company on its books.

Were this to happen, of course, Rashford would have two years left on his contract rather than one and any transfer fee payable by PSG would presumably increase. Many clubs amortise these values and by this way of thinking his cost would double because the amount of time until he becomes a free agent would, too.

Of course, Manchester United can set whatever transfer valuation on him they like and PSG can make any offer they like, but upping the value could hardly be said to make this transfer more likely to happen this summer.

And much as there is a lot to complain about the way in which PSG’s finances dwarf those of every other club in Ligue Un, every cloud has a silver lining. It may just be that a season in a league that isn’t as physical, at a club that isn’t perpetually trying to run in four different directions at the same time, surrounded by some of the very best footballers on the planet – including one who can stake a legitimate claim to being the greatest the world has ever seen – might be good for him.

His departure may also be good news for Manchester United. If things aren’t working out, they aren’t working out, and they have the opportunity to facilitate the move for him should they wish to. The Glazers might even consider that they could claw back a tiny sliver of good publicity if it’s agreed by everybody – supporters included – that it’s time for him to seek a new challenge elsewhere.

Having brought him through themselves there are no pesky transfer instalments outstanding, so whatever they get for him is pure profit, and getting a £200,000-a-week player off the wage bill would free that money up to be used elsewhere.

And that is something that Manchester United would have to bear in mind. Rashford would need replacing and there are now only three weeks until the transfer window closes. With this in mind, at the front of his mind may well be game time ahead of the World Cup. Because on the basis of his form over the last couple of years – although it was a deep new low, the penalty miss and reaction were not the start of this slide in form – he has work to do to guarantee a place in the squad, never mind the first eleven.

At 24 years of age, Rashford is approaching a fork in his career path. Moving to Paris wouldn’t come without risk. The standards expected will be exceptionally high. But there surely comes a point at which all concerned face up to the fact that his time with Manchester United has soured and that it wouldn’t be beneficial to any of the parties concerned to continue it unnecessarily.

But the risk to this all proceeding is that United do at times appear wedded to the paper value of their players, even when that paper value may not represent their actual value to the coach or the club. If this can be overcome, there could be a transfer here that works out for everyone.

Then again, Manchester United have their mysterious ways in the transfer market, and this means that nothing is ever quite guaranteed – even if the benefits to all should be obvious in the case of a player who has badly lost his way and needs to be set back on course.