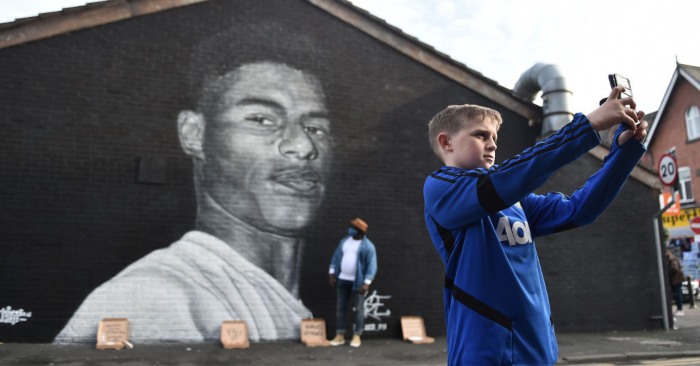 This piece was first published on October 24. It bears repeating today after Marcus Rashford felt compelled to defend how he invests his own money…

Maybe in 2020 we shouldn’t be surprised that the smartest, most passionate and most effective politician in the country is Manchester United’s striker.

Genuinely, it’s hard to see how Marcus Rashford could be handling all this any better.

The poise, dignity and laser-focused control with which he has carried himself throughout his crusade to stop kids going hungry during the worst pandemic for a century would be impressive from a seasoned politician. From a 22-year-old fitting it in around playing football for Manchester United and England it really is utterly extraordinary. It’s not just that the cause is so obviously righteous, it’s that everything he does and says and tweets is note perfect. It’s been a flawless campaign.

The irreproachable, clear-eyed fury of his response to the government voting against feeding hungry children during the worst pandemic and recession of our lifetimes was something else.

“I don’t have the education of a politician, many on Twitter have made that clear today, but I have a social education having lived through this and having spent time with the families and children most affected. These children matter. These children are the future of this country. They are not just another statistic. And for as long as they don’t have a voice, they will have mine.”

I mean, that’s just fantastic. It’s no exaggeration to call this what it is: one of the most profoundly affecting and important and inspiring political statements of our times. And it’s come from a bloke who’s also scored 71 goals and counting for Manchester United.

We are living through extraordinary times, but we shouldn’t lose sight of how crazy this is.

A 22-year-old Manchester United footballer decided to take on the actual British government, and has run absolute rings around them for months.

READ MORE: Rashford is driving football as a vehicle for societal change

He has forced this issue to the forefront of the nation’s conscience. He has exposed the black, cold, cowardly hearts of those who would purport to run our country. He has forced Tory after Tory to stand up this week in the House of Commons to try and explain why they think starving children deserved it actually and we shouldn’t help them.

But far more than that, the campaign is making real, tangible difference to real people’s lives. Rashford has already forced the government to U-turn once. He may well force another one. It may even come before this is published.

And even if the government holds firm, a difference has still been made. Even if a government of public-school spivs are willing to allow children to starve rather than lose face yet again to a young working-class footballer from the north of England, others are not.

Check Rashford’s Twitter feed and you’ll find details of an ever-growing list of cafes and individuals and local businesses around the country offering to plug the gap and give free meals to kids who otherwise won’t get them during half-term next week.

Scroll through these messages for a while and you’ll find yourself filled with a mix of emotions. Hope that the people of this country aren’t quite as appalling as those they elect to lead them. Relief that something, anything, is at least being done, even if it is just a sticking plaster. But perhaps most of all anger. Anger that it has taken a Manchester United footballer and the impromptu off-the-cuff generosity of ordinary people – ordinary people who will in many cases be struggling themselves and uncertain what their future holds – to do the right thing while the government refuses.

And anger about what comes next. Be clear about this. Rashford has humiliated and exposed this government more utterly than any opposition politician. He already represented everything they hate long before throwing himself so completely into a vital cause in which he believes entirely. They will come for him.

He has put a huge target on his back. And he knows it too. Rashford now has to be squeaky clean forever, or the right-wing press will come for him. Even if he is squeaky clean, they will come for him anyway. He’s young, black, northern and rich, so they won’t even have to step out of their comfort zone.

When those attacks come, remember why. Don’t let them win. Have Marcus’ back, because you can be damn sure he’d have yours.