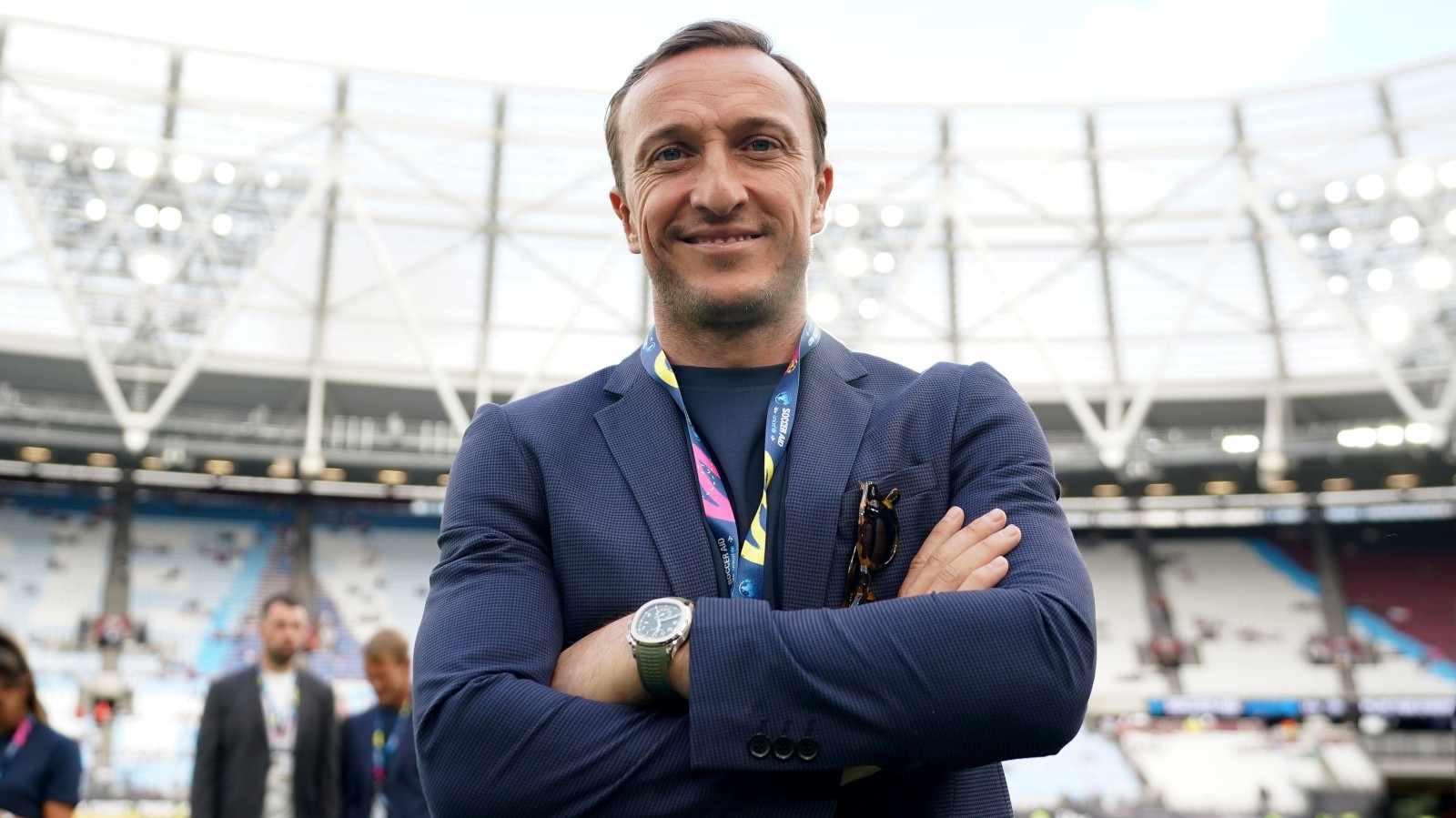 Mark Noble as sporting director could be the life raft David Moyes needs. It is nice to see West Ham actually treat a legend with reverence.

West Ham legend Mark Noble has finally got his just reward for over two decades of loyal service and more than 550 appearances for the club.

The 35-year-old will take up the reins of the newly-created Sporting Director role from the start of 2023 and will work closely with David Moyes, the board, coaches, academy, Uncle Tom Cobley and all… who like the Queen, was a massive West Ham fan, too. Probably.

The Noble appointment is a refreshing move from West Ham as they have been useless with club legends in the past.

Bobby Moore was treated terribly until after he died. Billy Bonds (799 appearances) rarely returns. Frank Lampard Snr (670) was cast out with Harry Redknapp. Alvin Martin (596) is a media pundit. Jimmy Ruffell (505) worked for a brewery. Trevor Brooking (643) is still a presence around the club, but in a very benign capacity. He’s unlikely to be kicking down Moyes’ door demanding an answer as to why he is refusing to start Maxwel Cornet.

The only problem with Noble’s new job is a January start date seems a bit too late.

Noble’s retirement at the end of last season had a bigger impact than many expected. On the pitch his legs had gone and he sadly wasn’t the player he once was, but off it he was a huge influence in the dressing room, and that is worth its weight in gold. Well more than a £50million Brazilian who looks totally lost in a claret and blue shirt.

As Declan Rice revealed earlier this season, Noble’s departure plus that of third-choice keeper David Martin (a West Ham fan) and Ryan Fredericks (always injured so plenty of time to gee-up the troops) had left a big hole the squad. Even though the trio spent most of their time on the bench.

Then this week new signing Gianluca Scamacca spoke to the Italian media about how he was bedding in at West Ham and he mentioned the rather worrying term: “a quiet group”.

“The acclimatisation is going well, the group is a quiet group, helpful, it was very easy,” he said. “I’m getting by, now I’m also going to start studying to perfect it (his English) but I’m making myself understood.”

“Quiet group” is not something West Ham fans want to hear. The last two seasons have been built on a strong sense of team spirit, where everyone was playing with a smile on their face.

Who can forget the famous band goal celebration against Spurs? Bonkers as it appeared, it showed a unity between a varied group of nationalities.

Jesse Lingard got the band back together 😂pic.twitter.com/TSpfzgMwmY

But now Moyes has a slightly larger squad, with bigger names and even more nationalities. A German, a Brazilian, a Moroccan, an Ivorian, a couple of Italians and an Essex boy joined the squad this summer.

What is clearly missing is the glue that binds them all together, the experienced pro with the arm around the shoulder who brings everyone together, to have a laugh, to kick them up the arse, to tell them that the Spurs game is really important.

That used to be the role of club captain Noble. You can’t expect the 23-year-old Rice to fill that huge void alone. He’s got enough on his plate trying to be the best player on the pitch. Being the best in the dressing room is another job entirely. Would a 30-something senior pro who has been around the block really listen to a 23-year-old?

There’s been something wrong in the West Ham squad for a while now and it needs to be fixed, very quickly.

Noble has a big job on his plate; this is certainly not a ceremonial title where you glad-hand a few people in suits on matchday and try and stuff enough prawn sandwiches down your Gregory in one of the function rooms. This is a ‘roll up your sleeves and get stuck in’ job. No time-wasters allowed.

If West Ham continue to perform as they have been this season, then by the time Noble opens the door to his new office on January 2, Moyes could already be in the dole queue. Not that millionaires need to join a dole queue.

Noble will have to start unofficially whispering in a few ears and tapping at people’s windows for the next few months instead.

And the first window he needs to visit is Moyes’ – and encourage him to make swifter changes to the first team. This drawn out ‘bedding-in’ process is killing the side.

It doesn’t take a genius to see that Tomas Soucek and Vladimir Coufal need time on the sidelines, that Cornet and Scamacca should start.

As should young Flynn Downes. Every West Ham team should have a player who, like Noble, supported the club as a boy. It makes you really give a shit about what is happening on the pitch. Furthering your career is not your key objective, holding your head up high among ‘your people’ is. Creating a legacy that lasts forever is more important than the cash. Hello, LIV golf rebels.

Flynn Downes MoTM v Bucharest to not used AT ALL on Thursday + not starting today. Moyes leaving himself wide open to "strange decisions" criticism if we don't do well today.

“(His role) will include Academy development, player recruitment, and player and staff wellbeing – with a particular focus on ensuring players both progressing through the ranks and new to the Club are nurtured in the West Ham United football philosophy and values,” said the club.

Player and staff wellbeing is putting the fun and noise back in the dressing room and on the training pitch.

It doesn’t have to be all clowning about and hurling custard pies around. It’s small things like sweeping the dressing room after a match, which Noble was famous for, and respecting the club and those who work in it, from the guys and girls who work in the kitchen all the way up to one of David Gold’s other halves.

The West Ham academy has always been famous for churning out great talent, it’s one of the pillars of the club and plastered across every bit of branding and merchandise. But if you look back, it’s not what it once was under former academy director Tony Carr.

In the last 10 years only Rice (though he was chucked by Chelsea) and Ben Johnson have successfully graduated into the first team, with Conor Coventry and Harrison Ashby, along with a few other benchwarmers, clinging on before they are ditched into the Championship and beyond like so many others – Grady Diangana, Josh Cullen, Reece Burke, Jeremy Ngakia, Sebastian Lletget to name but a few.

Something is wrong in the academy. Why are so many falling by the wayside? As a graduate himself Noble needs to unearth the problems and solve them.

So, just a couple of ideas for Noble to start off with. I’m sure he’ll find plenty more to do. Crucially he understands the club. West Ham fans love ex-players who return and work in some kind of coaching/back office capacity, men who get ‘it’. Whatever ‘it’ actually is.

Lou Macari, Sam Allardcye, Glenn Roeder, Gianfranco Zola, Alan Pardew, Avram Grant and Manuel Pellegrini had no West Ham connections and were all doomed to short spells at the club before they even walked in the door.

Moyes has some credit in the bank after the last couple of seasons, but he’ll need to grab the Noble-shaped life raft the club have tossed him to ensure he lasts a bit longer than those who have trodden this path before.