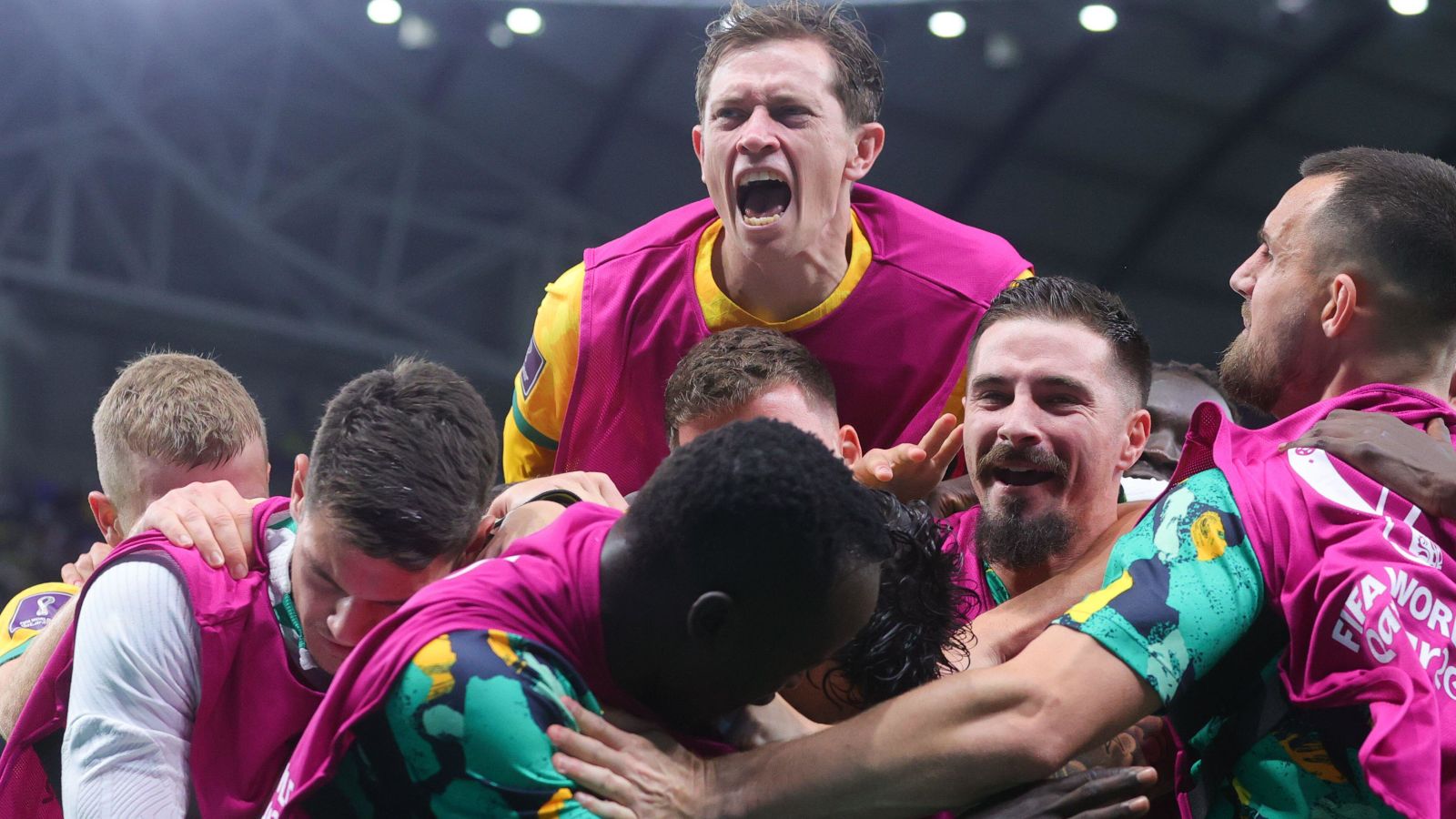 Of course the stunning underdog story at Qatar 2022 has ended up being Australia. Of course it is.

Remember when it was Saudi Arabia who were the lovable underdogs? Great days.

This, though, is a stunning achievement for an Australian team that, with all due respect, should have got absolutely nowhere near the last 16. Australia’s men have only ever achieved that once before, and the 2006 squad that had its hearts broken deep into stoppage time by eventual champions Italy was an entirely different beast. That was the team of Kewell and Viduka, of Cahill and Schwarzer. But it had top-level depth, too. Nine members of that squad were Premier League players, three more were in Serie A, Jason Culina was at PSV and Scott Chipperfield at Basel.

This 2022 squad that has just at least matched their achievement barely made it through qualifying, has no Premier League players, eight A-Leaguers and six players from the Scottish league. It is on that basis therefore perhaps the most Scottish team ever to make it past the first round of a World Cup.

This isn’t criticism of these players, it’s the opposite. The bald fact is there just aren’t players in this squad of the calibre of those former greats, and the depth of talent and just as importantly elite experience a level below isn’t there either. So what they’ve just achieved is incredible. A truly extraordinary achievement for a team from a great sporting country with more football heritage than is generally acknowledged but with a current squad that appeared to have no realistic chance of escaping a group containing world champions France and dark horses Denmark.

Australia did enough in the opening 20 minutes against France in the first game to earn respect, and finding themselves ultimately steamrollered by Kylian Mbappe was no disgrace. But their opening goal in that game still felt entirely like a nice moment to take home with them and nothing more. There was little sign that this was a team about to win two World Cup games in five days, matching the total from their entire previous history at the tournament.

And yet they’ve done it with hard-earned and deserved 1-0 wins over Tunisia and Denmark, who were both wildly disappointing. Tunisia at least managed to end their tournament on a high with victory over already-qualified and half-interested France, but it’s right and proper that it wasn’t enough to send them through. It would have been a great story in its own right but would have owed too much to the quirk of the fixture list. Whoever played France last was likely to have the advantage Tunisia did, however spectacular their exploitation of that advantage.

Australia’s story is the better one. They scared France, out-thought Tunisia and outplayed Denmark, whose status as the most disappointing country in this tournament can surely only possibly now be usurped by Uruguay in Group H.

The Australians were lion-hearted and their winning goal (barely two minutes after Tunisia’s had altered the Socceroos’ requirements from avoid defeat to win at all costs) was brilliantly taken by Mathew Leckie, whose first World Cup goal came from his 17th attempt going back to 2014. It’s a brilliant story.

But while the story is Australia’s, the footballing focus lands inevitably on Denmark. Because any kind of performance from a team that so heroically reached the last four at the Euros less than 18 months ago would’ve rendered moot anything the game but limited Australians could offer. But Denmark have been a team seemingly distracted and struggling for an identity and a purpose and a system throughout this tournament. They have been toothless in attack but more surprisingly woefully short of creation and inspiration behind.

But they’ve offered nothing in Qatar. A team that arrived with huge neutral support for multiple reasons – Christian Eriksen’s return and their understated kit protest among them – and every chance of going deep into the knockouts are home at the earliest opportunity and most damningly they will not be missed.

They changed their formation for this one, switching to a back four for a must-win game in the hope of getting some joy out of an extra creative player on the field. It was understandable and necessary but, once Australia had weathered an initial 20-minute storm at the start of the game. it really was striking how rarely it looked like working.

We’ll not go so far as to say it was easy for Australia in the second half, but they must have been surprised it wasn’t harder. Even Leckie’s goal didn’t galvanise Denmark into a response. If anything, it cowed them. They looked crestfallen and beaten. There was no belief that two goals could be found in the remaining half an hour, and that proved to be one of very few things Denmark got right at this tournament.

Theirs was a campaign that ended with Kasper Schmeichel lumbering hopefully forward for a corner which Eriksen swept tamely into the arms of Mathew Ryan. A fitting end for Denmark, but remarkably we still do not know how this adventure finishes for the last 16’s most unlikely underdog story.