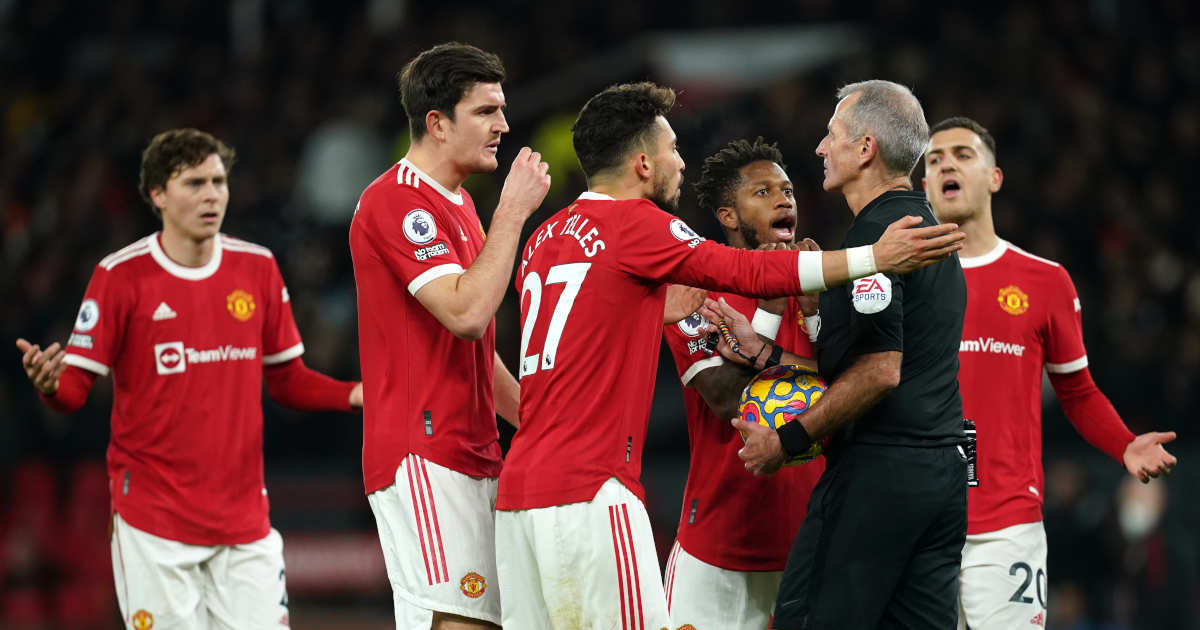 On a strange and dramatic night at Old Trafford, Manchester United beat Arsenal, but the big news came ten minutes after the final whistle.

You just know that somewhere inside Old Trafford, somebody’s brow is furrowed. What if? What if Michael Carrick had been the spiritual heir to Sirs Matt Busby and Alex Ferguson? What if they embarked on that five-day long search for a replacement for nothing, and the perfect man for the job was right there under their nose? Ralf Rangnick is an excellent and fascinating decision for Manchester United to take, but his United DNA levels are known to be low. What if, indeed?

Manchester United squeezed past Arsenal with a performance that wasn’t quite convincing, but after a run of one win in their last eight Premier League matches, it was one they needed. It lifts them to seventh in the table, within three points of the top four.

For Arsenal, this was a missed opportunity. They’d only lost one of their previous ten matches, and a win would have put them in fourth place, just five points behind Liverpool.

Perhaps predictably, considering the form book, Arsenal came out of the traps flying, winning three corners in the first 100 seconds from kick-off. But after this initial burst of energy the match curdled a little bit. Manchester United had a lot of possession but were unable to do anything much with it; Arsenal looked well-structured, like a team with a process, only without having found a way through.

Arsenal kept the pressure on, and when they won a corner on the right, David De Gea went down under a challenge. The ball span out to the edge of the penalty area, where Emile Smith Rowe unleashed a low shot past the stricken goalkeeper and in. The initial reaction was shock and a couple of checks with the video assistant. Television replays showed that referee Martin Atkinson had not blown his whistle until after the ball had crossed the line.

Sure it hurt when Fred stood on his ankle, but De Gea has to do everything he can to stay up until the ball goes out of play. Can't have been that bad if he was up a minute later. Not sure how United can argue the goal shouldn't have stood.

But the replays also showed something else, as well; the ‘challenge’ under which De Gea had fallen like a sack of potatoes had been from one of his own players. Fred had caught the corner of his foot from behind. Now, we can’t say for certain that De Gea fell like this because he believed himself to have been touched by an Arsenal player, but we might venture to suggest that he might have stayed on his feet had he known what was to follow.

There is a conversation to be had about when the referee should whistle under such circumstances, and a suspected injury to a goalkeeper usually results in an immediate stoppage of play. But how ‘immediate’ should ‘immediate’ be? Martin Atkinson didn’t blow his whistle until the ball was in the back of the Stretford End net, and with no foul having been committed in the first place, there was nothing really for which play even could be called back.

It’s possible to argue that Atkinson might have been a little unclear in putting the whistle to his mouth as Smith Rowe went to shoot, but this feels a little like digging too deeply. He didn’t blow the whistle, at that point, and that should be all that matters. Whether you choose to blame De Gea or not comes down to whether you believe that he was genuinely injured by the tap on the ankle that he received from his teammate.

If you do believe that he was, then it’s really just a case of bad luck. While referees are encouraged to stop play quickly for certain injuries or incidents – and rightly so – that doesn’t mean that the ball simply goes dead when a goalkeeper goes down injured, especially without a whistle having been blown. If you don’t believe that he was, of course, it’s a different matter, and De Gea paid a high price for his attempt to hoodwink the referee. The one thing that we can say for certain is that it was nothing to do with anything that Arsenal’s players had or hadn’t done.

Strangely, the goal didn’t seem to have a very positive effect on Arsenal. The rest of the first half was a bit of a disjointed affair until, two minutes from half-time, Jadon Sancho fed the ball inside for Fred, who looked to run at goal but then seemed to think better of it and instead contorted his body to pull it back for Bruno Fernandes to stroke home. It was a fitting way to end the half, really, the teams having cancelled each other out. Had Arsenal managed to maintain the intensity they had until they scored their first goal, they probably would have been out of sight by half-time.

The second half started brightly, with a flying save from De Gea from a Gabriel header, and two minutes later it was Aaron Ramsdale with some goalkeeping heroics to stop Ronaldo. And three minutes after this save United had the lead when Marcus Rashford, who’s had a difficult season so far and had had a quiet first half, worked a gap on the right and picked out Ronaldo to give United the lead with his 800th career goal.

This lead, however, only lasted for three minutes before Arsenal levelled again with a near-identical goal, this time with Partey and Martinelli combining nicely for Martin Odegaard to sweep the ball wide of De Gea.

He’d done little else of that much note all evening, but Ronaldo sure does have a way of making all about him. Odegaard, possibly still a little hyperactive with the excitement of his goal, went in for a careless tackle on Fred. It was somewhat surprising to see that Atkinson required the video assistant for a penalty that seemed fairly straightforward, but Ronaldo drove it down the middle to give United a lead they hung onto as Arsenal started to run out of steam. The best chance of the closing stages fell to Pierre-Emerick Aubemeyang, who found himself unmarked and eight yards out, only for his shot to be saved. The replay determined him to have been offside anyway, but it was a moment that summed up another frustrating game for him, which ended in substitution.

Shortly after the final whistle came the announcement that Michael Carrick had ended his spell as the club’s interim-interim manager (completely expected) and was leaving the club (not expected). Carrick deserves considerable credit for carrying on the job under difficult circumstances. He was only in charge for three matches, but they ended in two wins and a draw from very challenging opposition at a difficult time. He wasn’t at the wheel for long, but he drove with distinction.

Watching on from the stands, Ralf Rangnick could be forgiven for wondering what he’s let himself in for. On the one hand, Manchester United retain the services of one of the world’s great goalscorers, who earned himself a Man of the Match award for scoring twice, and a wider group of highly talented players. They’re usually in with a chance. But on the other, this was a chaotic evening, at which the system-minded Rangnick may well bristle. Whatever Manchester United are to become over the course of the second half of this season, it’s sure to be interesting, and he knows that he has something to work with.