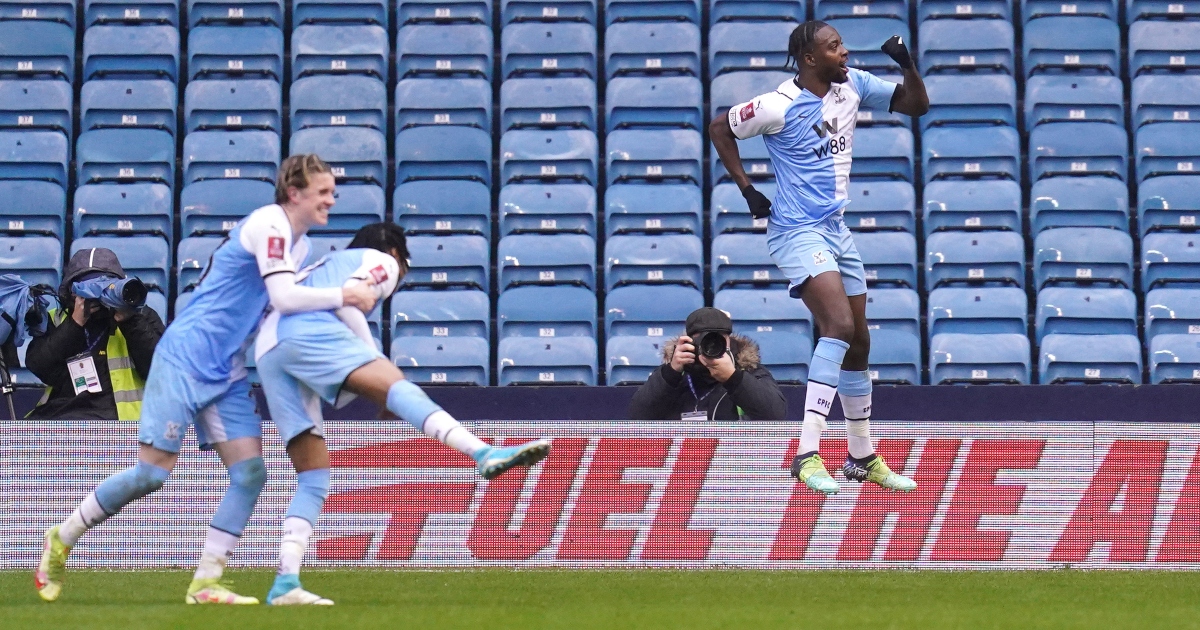 Michael Olise went all Arjen Robben for 15 minutes to win it for Crystal Palace. Jack Butland was less successful in his Manuel Neuer impression.

Olise has impressed in the Premier League. He’s got two goals and three assists from the bench; two of those contributions earned draws against Leicester and Arsenal. But then he inevitably finds himself back on the sidelines – he’s made just two Premier League starts since his £8.5million move from Reading.

It took a while for Palace to get the 20-year-old in the game on Saturday, but Millwall’s Jake Cooper became well aware of Olise’s quality in a seemingly unstoppable 15-minute spell. Four times Olise came down the right for Palace and four times Cooper failed to prevent him cutting in on his left foot.

Olise brought the scores level on the first occasion, bending the ball off the post and in. The second time he hit the same post. The third time his shot drifted just wide of the mark.

“He [Cooper] has got to show him [Olise] down the line,” co-commentator Dean Ashton insisted at this point. And Cooper thought he had managed to do just that the next time he was faced with the winger, before Olise again cut in and dinked in a cross for Jean-Philippe Mateta to easily nod home and win the game.

It’s all very well knowing how to deal with a player like that, and other better defenders may have successfully shown and forced Olise to the byline, but the Palace man had a case of the Arjen Robbens on Saturday, gliding inside despite all arrows pointing away from goal.

While the Palace fans will be desperate to see more of Olise in the Premier League after such a sparkling display, they will be praying for the continued health of Vicente Guaita after Jack Butland’s error at The Den.

Exhibiting his skills of intuition, Clive Tyldesley spent a good couple of minutes before the goal talking about Butland’s remarkable fall from grace. The soothsayer incredulously pointed out that the England international – who was on the bench for England’s Nations League semi-final defeat to the Netherlands in the summer of 2019 and was starting games for Gareth Southgate’s side six months earlier – had made just five senior appearances in the last 18 months. The commentary aside built beautifully to Butland’s howler.

He’s not the first goalkeeper to be caught in possession this season, and to Tyldesley and Ashton’s extreme frustration, he won’t be the last. “I just don’t get it,” Ashton exclaimed. And given what he had just witnessed, his bemusement was justified.

Benik Afobe wasn’t about to pass up that opportunity 🎁

Butland shares a world with Manuel Neuer, who ushered in the age of the keeper sweeper, Ederson, who assists Manchester City forwards with 70 yard passes, and Aaron Ramsdale, who drills pinpoint balls through the centre of the pitch for Arsenal. But it’s a world that has developed to a point beyond Butland’s capability, as is the case for many goalkeepers struggling to adapt to one of the biggest changes in top level football in the last ten years.

Butland was considered a goalkeeper with “two good feet” not long ago. Gareth Southgate used the Birmingham academy graduate’s footwork as grounds to select him. But the contrast between his distribution and that of Jordan Pickford and Ramsdale is now so stark as to be almost cruel.

Butland’s first touch, as he received the ball from Tyrick Mitchell, left him with three Crystal Palace players to pass to. His second touch was unnecessary, but kept two of those options open. His third, absurdly in the direction of the two closing Millwall players, left him with no option but a hopeful toe-poke, that he scuffed straight to Benik Afobe.

Despite their fortune with the goal, Millwall were worthy of their half-time lead as Palace struggled to cope with the intensity of The Lions on the pitch and those roaring from the stands, and they had chances to draw the scores level as they piled on the pressure in the final moments of the game. But Premier League quality shone through in that brief spell after the break, as a player plying his trade in the Championship last season showed exactly why he had been plucked and promoted to the top flight. This was Olise’s day.