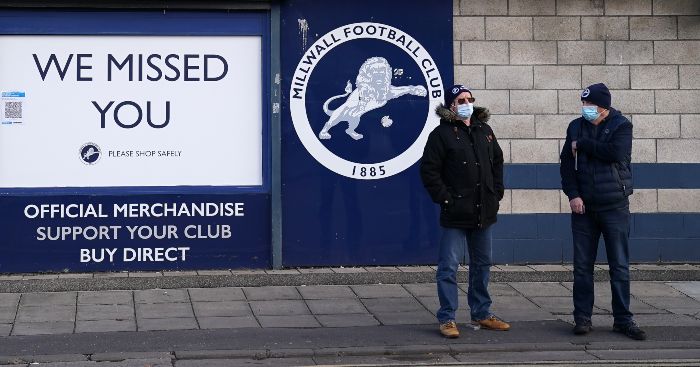 For all that the presence of fans at football matches has, in their absence, been elevated to an almost holy status, Saturday was a reminder that actually, some supporters can behave very poorly. A section of Millwall fans booed the players taking a knee against Derby and if this was going to happen anywhere, the odds would’ve surely favoured that club.

So this was perhaps not wholly unexpected and perhaps it won’t be the last such incident. If the grounds had been full, we may even have seen wide scale booing of the players for performing this new pre-game ritual. Football clearly still has a racism problem.

The club’s statement was especially nuanced:

“The gesture of ‘taking the knee’ before matches provides an opportunity for us to do exactly that and continues to allow all those playing to publicly showcase their support – on behalf of the whole squad – for the fight against discrimination.

“We wish to make clear that taking the knee, for us, is in no way representative of any agreement with political messaging or ideology. It is purely about tackling discrimination, as has been the case throughout.

“We will continue to do this until the start of the New Year when a new and comprehensive anti-discrimination strategy will be announced by the club.”

Clearly this is an attempt to divorce themselves from any association with Black Lives Matter. And subsequent callers to 5 Live repeated this. That’s what they were booing: BLM, not anti-racism.

There’s not space for me to explore this here but I think many of us would respond by raising a cynical eyebrow, accompanied with an ‘aye, right, if you say so.’

Regardless of this attempt at PR-ing their way out of the booing, “tackling discrimination” absolutely is “political messaging and ideology” – it is the political message and ideology that we are all equal, all one, none superior to the other, all equally the beautiful creation of Mother Nature, no matter what race or colour. That’s about as profound, deep and holy a political ideology you could wish to support.

But we can see the muddy waters they are wading in here. What exactly are we, the players and club, supporting when taking a knee? Are we just saying hey, racism, it’s bad? Are we allying ourselves to the BLM movement it is clearly born from, and the associated political as well as societal demands? Do we get to choose? Has it evolved?

Well-meaning gestures of solidarity can easily become thoughtless rituals. They can become obligations, something we feel compelled to do not to look bad, but don’t really properly understand. Worst of all they can easily be a substitute for real material change, eventually becoming little more than a pose.

We’ve seen this with the poppy and its proponents who seek to enforce, not so much their understanding of the horrors of war upon us, but their symbolism of it. So much so the symbol itself dominates that which it is symbolising, with non-wearers accused of disrespecting the war dead. So everyone must wear one to avoid that accusation, even though it would usually be untrue. It replaces understanding, thought and debate. It oppresses and those who indulge in it seem to be self-aggrandising, almost bragging.

The last thing we want is for taking a knee to become like that.

Already, there is a sense that suggesting stopping taking a knee, or believing it should stop, will be spun to mean you’re weak in your opposition to racism, that you don’t take it as seriously as you should and are probably racist really. If you think it should stop, that puts you in the same category as the Millwall booers.

But we must not be cowed like this. It helps no-one. Not everyone can and does feel the same about it a few months since it started. It surely cannot be viewed the same the 50th time as it was the first.

Back in September when QPR didn’t take a knee before a game, there was much criticism of the club. In response, Les Ferdinand quite profoundly and importantly said:

“The taking of the knee has reached a point of ‘good PR’ but little more than that. The message has been lost. It is now not dissimilar to a fancy hashtag or a nice pin badge.

“What are our plans with this? Will people be happy for players to take the knee for the next 10 years but see no actual progress made? Taking the knee will not bring about change in the game – actions will.”

Sir Les is an important person in the game and his words have heft and gravitas. They don’t put him or anyone who agrees with him alongside those at Millwall on Saturday.

If seeing players taking a knee has already lost its meaning or is diminished as a statement by repetition, then how useful is it? Indeed, keeping on making the gesture may do more harm than good because it allows us, as witnesses to players doing it, to feel like at least something is being done about an evil that we often feel powerless to combat otherwise, and thus it can push the issue to the back of our minds once again.

In other words, the gesture ends up filling the hole where change, where revolution, should be.

There’s no doubt it brought many issues to the fore, but surely now is the time for the next steps towards a fair, just and equal society to happen. Gestures without progress and action are empty. So now is the time for football to address its racism. To address it at all levels and on a granular basis from youth-stage upwards and to do so publicly. All the talk about educating people out of being racist has been going on for many decades but clearly it has its limits, as Saturday proved. We need more.

We need legislation, proper policing of the legislation and an internal structure to the administration of the game that wholly embraces equality. Having men like Greg Clarke at the top is both literally and symbolically the problem.

As Les said in that same interview:

“Our Under 18s were forced to abandon a game in August 2019 against AD Nervion FC due to racist abuse. More than 12 months on, Uefa refused to deal with the situation and the Spanish FA did nothing.”

This is all too typical of football authorities. We need positive action to outlaw discrimination in all its forms. That always begins with ourselves. Empathy, understanding and solidarity are all fundamentals behind any hard-won positive developments in this battle, but all gestures, no matter how well-meaning and even when they come from a good place, can only have a limited shelf life.

If they are to be the catalyst for lasting change, they need to inspire personal change, yes, but also those with power must take action, not be the end in and of themselves. The great thing about taking a knee and BLM and the discussion around it has been how it has made us confront ourselves, our own thoughts, experiences, culture, history, vocabulary and understanding. But just doing that isn’t anywhere near enough. It is only the blue touch paper, not the firework.