Home Johnny Nic Milner humbled Messi, has played in almost every position and doesn’t take himself too seriously 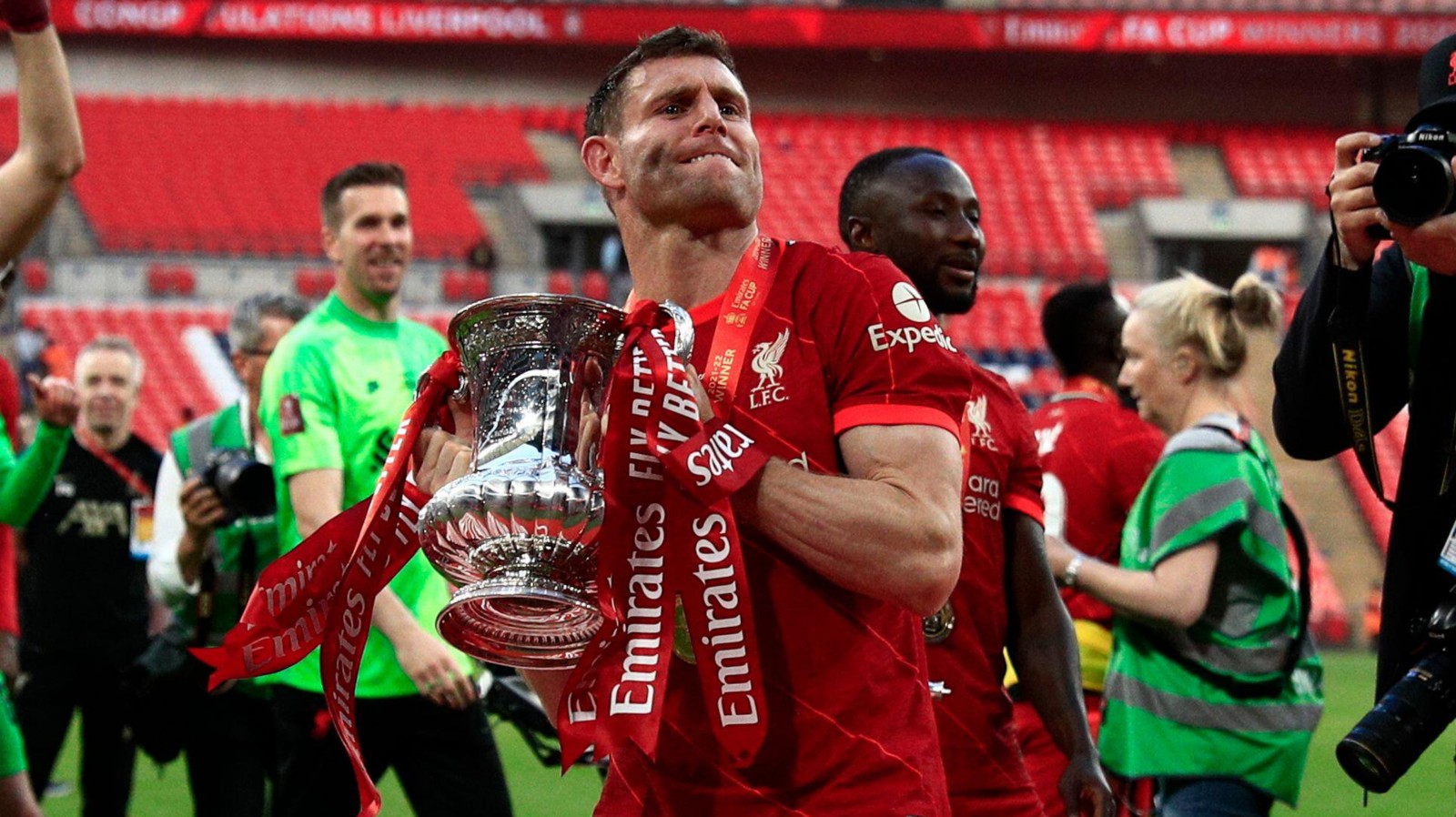 James Milner was busy being a Leeds-born cyborg long before Erling Haaland was a thing. The Liverpool vice-captain isn’t stopping anytime soon

Who’s this then?
James Philip Milner is a teetotal, 36-year-old, Leeds-born legend who has been playing for 20 years and shows no sign of stopping with Liverpool, who have offered him another year on his contract. He has, just this week, been made an MBE in recognition of the foundation he set up to promote healthy recreation for young people, so I decided to revisit and update the appraisal of Milly I wrote two years ago.

A 5ft 9ins multi-purpose player who excels in several different positions, he has played everywhere on the pitch apart from goalkeeper and centre-half, is built like a brick sh*thouse, is hard as nails and quite possibly still the fittest footballer playing today even at 36. He also speaks fluent Spanish.

Legendarily indefatigable since an early age, he has been excelling at pretty much everything he’s ever done. A total of 11 GCSEs mark him out as anything but the archetypal intellectually uninterested footballer. A special school award for PE was an early marker for his quite extraordinary physical prowess.

He played for his school at football, cricket and long-distance running, amateur football for Rawdon and Horsforth and was on Leeds United’s books from the age of ten. Making his first-team debut at 16, his first goal for the club made him Premier League’s youngest scorer – a record he held for two and a half years.

He has made a total of 814 appearances for Leeds, Swindon, Newcastle United, Aston Villa, Manchester City and Liverpool, with a further 61 caps for his country from 2009 to 2016, having made a record 46 appearances for the under-21s. Add all those games up and it comes to 921 in total. And he ain’t done yet. He must have 100 more in his sights. There is absolutely no sign of him retiring and no-one would bet against him playing in the top flight aged 40.

Why the love?
Not so much good-looking as handsome, his head looks chiseled out of granite with a huge jaw that looks more like a limestone geographical feature you’d find around Malham Tarn. He’s got incredible high cheekbones that any model would die for, so sharp you could slice cheese on them. Combined with lovely, almost shy and amused blue eyes and a ripped body, he’d be a perfect candidate for one of those monochrome posters of a muscular but tender man cradling a baby.

It is rare for a player to be a fan favourite at every club he plays for and an enemy at none but he absolutely is that man. Even playing for England in the disastrous Euro 2016 hasn’t left an indelible stain on his reputation. This is surely in part because at the end of every game, he has always looked like he’d run every last calorie out of his body. He stands there, dripping with sweat, pink of face, having given everything once again. And what’s more, he’s prepared to do it all over again right here, right now if needs be. At the end of it all, that’s pretty much all any of us can ask of a player.

There is a simple joy in watching someone who is tremendously fit and strong and unafraid to use his physicality. Sadly, this is what football is outlawing, of course. Being hard is frowned upon by too many and vaunted by not enough. So many of today’s middle-distance athlete footballers look like they’re made out of meringues and couldn’t be hard even if you put them in armour. Mr Milner, however, is proper old-school, made of pig iron, hard.

This is hard in the best way, meaning resolute, tough, strong and determined. Not dirty. OK, a little bit dirty. But only a tad.

His way of dispossessing an opponent by basically inserting his arse and massive thighs between the player and ball and basically buttocking him off it, but without giving away a foul, is simply brilliant.

Of course he rather upset Lionel Messi, who didn’t appreciate Milly’s refusal to let him do what he wanted when he came on as a substitute in that 4-0 Liverpool win at Anfield. Our hero gave him some Proper Yorkshire right up his tax-dodging bracket. In the tunnel, he called Milly a burro – a donkey. In the tunnel. Yeah, well, that donkey kicked your arse all the way back to Barcelona, son. Messi’s claim that this was his revenge for being nutmegged in the first game was to misunderstand the situation completely. This is just how he plays against everyone, Leo. He’s not made you a special case and maybe that’s what was so annoying to the middle-eastern oppressive autocracy-loving Argentinian.

Jimmy M’s isn’t a career of high after high. He’s had a lot of ups and downs at Leeds and then Newcastle where Graeme Souness didn’t fancy him, but then Newcastle didn’t fancy Souey after a bit and his replacement, Glenn Roeder brought Milner back from a loan at Villa. He became a bit of a run-of-the-mill squad player at Manchester City but at Liverpool, he’s become indispensable. His ability to play in about nine positions and be really good in all of them is a manager’s dream. At one point he turned himself into a bloody good full-back, his running and physicality perfect for putting a stick in the spokes of many a winger or striker. Or, as he would call it, ‘disrupting their rhythm’.

He made 39 appearances this season, often off the bench. He brings huge experience and given he can play to standard almost anywhere on the pitch, he is invaluable for his manager.

On top of all this, self-deprecation is a very endearing quality and James has it in spades. So much so that in a very modern meta way, he interacts with his own Boring James Milner parody account. In an era of incredibly over-rewarded self-regard and brittle precious ego, he’s just a very dedicated professional, but doesn’t take any of it too seriously. Or maybe he is just an advocate of the philosophy that says to take anything seriously, you need to be able to laugh about it. It’s a great attitude to have.

Certainly seems to be having the time of his life playing up to his image as being dull and enjoying his time in one of the best teams we’ve seen in the modern era. He has a large collection of silverware including three Premier League winner’s medals, two League Cups, two FA Cups and a Champions League medal, as well as a UEFA Super Cup and FIFA Club World Cup each. More remarkable yet he has a runners-up medal in the league and FA Cup, two in the Champions League and one in the Europa League.

And as if all this isn’t enough reason to love him, in 2011, he established his own foundation with the aim of promoting ‘healthy recreation for the benefit of young people in the United Kingdom by the development, improvement and provision of opportunities in sports,’ while also raising money for national charities such as Bloodwise, MNDA, NSPCC and Help for Heroes. It’s so far raised over a million pounds.

Milly is basically just better than us.

Anyone else counting down the minutes to the game? Come on the boys 🦁#fullyprepared#3lions#halftimepuzzleentertainment #penorpencildilemma pic.twitter.com/e1cG1FuDKX

Three great moments
The first tackle on this reel is one of his buttock specials, retrieving the ball with his arse:

As fast as a bullet from a gun he boots the ball off the line:

He couldn’t face watching the match-winning penalty, the big wuss:

Future days?
Personally, I hope that his last season as a professional, which given his amazing fitness levels will probably be when he’s 44, will be played back at Leeds. It would be to complete a perfect circle to return to his boyhood club. Jurgen Klopp has said he wants him onboard for another campaign.

I can’t imagine him as a manager, somehow, though he’d be a great fitness coach. When you think about it, he really is a poster boy for hard work, dedication and loyalty. Although he’s had five clubs, and one on loan, he usually stays four or five years. He’s played seven seasons at Liverpool already. Although his deal is up at the end of June, they will surely keep him on a rolling one-year contract until his batteries conk out, which might not be anytime soon. Every club needs a utility player, but they are traditionally a jack-of-all-trades and master of none. However, Milly is master of about five. It wouldn’t be a surprise if he was good in goal as well.

One of those players who, in two or three generations’ time, will be talked about by parent to child in hushed awe. ‘You saw James Milner play? What was he like?’ ‘What was he like? He was…sweaty…and useful, like a spoon.’

Long may he continue to ooze the sweat of three men.