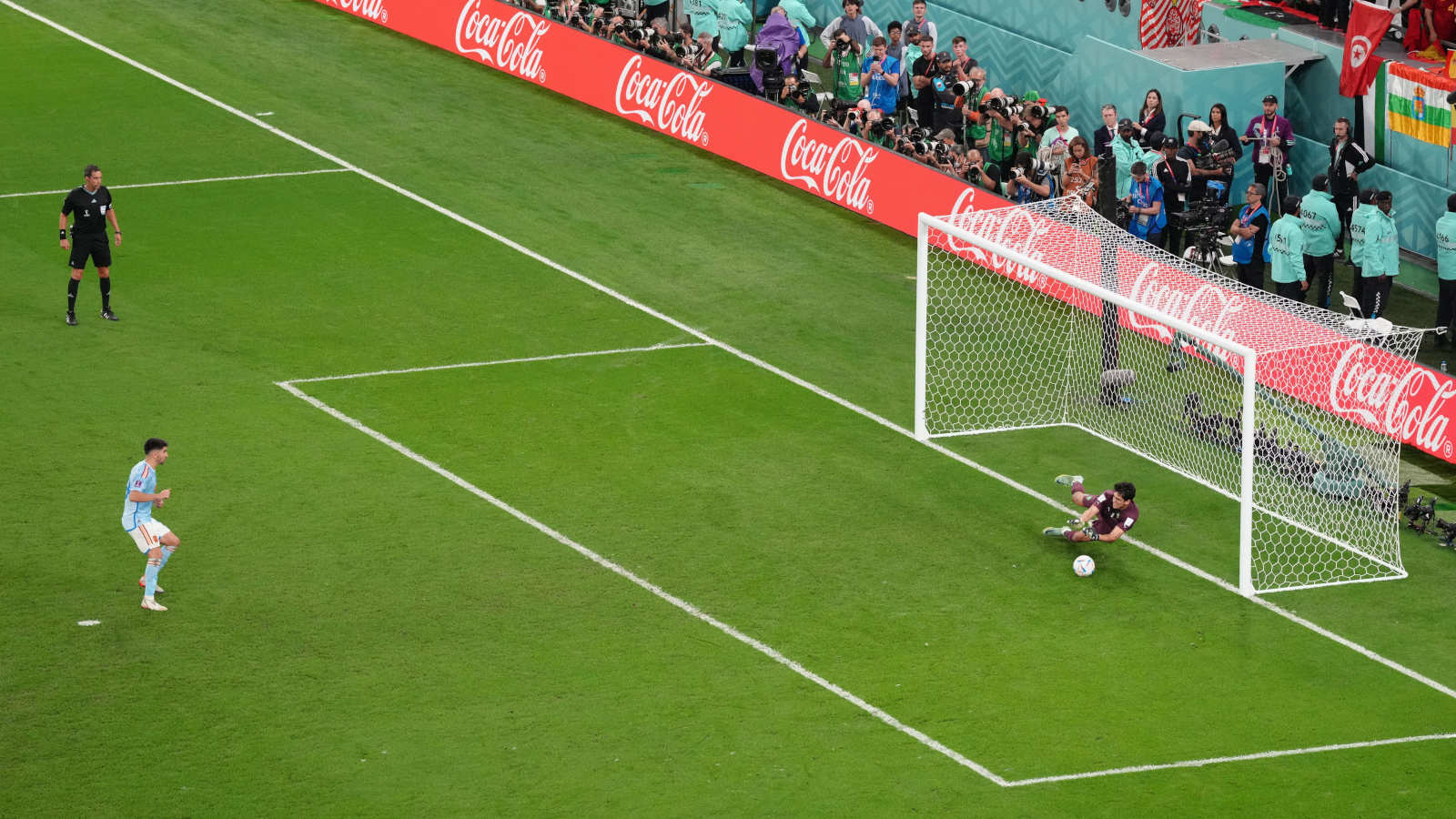 With an incredible low defensive block, Morocco put it all on penalties against Spain and were rewarded with a first ever World Cup quarter-final place.

It had been looking as though this World Cup quarter-final line-up would be pretty predictable. Throughout the previous six knockout matches the big guns had found a way through with varying degrees of complexity. But on this occasion the ‘Big Beasts’ found themselves toothless and defeated by the Atlas Lions with a result that, in putting an African team through to the last eight and reminding us all that the underdog can roar, has done the competition a lot of good as well.

This was Morocco’s sixth attempt at the World Cup finals; they’d previously only got past the group stages once, in 1986, when they topped a group that also featured England, Portugal and Poland before a Lothar Matthaus goal for West Germany, scored just two minutes from time, knocked them out in the second round.

Morocco won one group game that year: 3-1 win against Portugal in the last match. Their only other win in the finals came 12 years later in France, when they again were victorious in their final group game. But even though they beat Scotland 3-0, Morocco were eliminated on goal difference by Norway.

In 2018, they finished bottom of their group and could only take a single point from a 1-1 draw against Iran.

So the team of 2022 had already won as many games in the finals as they ever had before and equalled the team’s best performance before they even kicked a ball. But Morocco’s group performance had suggested that they were capable of going deeper still. They would go into the fixture believing as much.

And there was little reason for them not to. With none of the other group winners having picked up the full nine available points from their three games, Morocco’s seven were the joint-highest of anyone in the tournament. They scored one more goal than Brazil did. With two wins, against Canada and Belgium, and a draw against 2018’s finalists Croatia already under their belts, they had no-one to fear.

The extent to which Spain would prove an insurmountable object was always going to be determined by which of their versions turned up. Seven goals and six different scorers against Costa Rica in their opening match indicated that they could be formidable opponents for anybody, but their two subsequent games against Germany, who held them to a 1-1 draw, and then Japan, who came from behind to beat them 2-1, had also demonstrated that they may also be beatable.

Morocco opted for a low block, so the first half followed a predictable pattern. Spain had the majority of possession but were largely unable to break down a cohesive and tenacious defence. When Morocco broke they looked more dangerous, and they had the best opportunities of a largely excitement-free first half. But these two teams arguing over this optic at half-time felt a little like two bald men fighting over a comb. Spain were limited to one shot in 45 minutes, despite having had 67% possession.

The febrile nervous energy that was evident also seemed to be on display outside the stadium too, only in a somewhat more troubling manner, with reports of clashes between supporters and security guards. The security forces claimed that these were fans without tickets but the picture was mixed; it seems there were plenty of supporters with tickets in amongst them. Quite what the truth of this situation might have been is unclear for now, but it didn’t look very safe and there didn’t seem to be many empty seats inside the stadium either.

As the second half progressed, the game seemed to deteriorate in quality and the potential issues with playing such a low block became increasingly evident. By the time 85 minutes had been played, Spain’s possession had crept up to 73% and the goalscoring chances had started to dry up for Morocco. Playing so deep seemed to be putting quite a burden on their defenders, who looked increasingly leggy as the second half wore on. Chances for Spain remained few and far between but it felt very much as though Morocco were wanting the full-time whistle to blow more.

Extra-time became a game of attack versus defence, all the more so when Spain introduced Ansu Fati seven minutes in and gave themselves a little more width. But Morocco were penned in, and defending against this now continuous Spanish press looked as though it had taken its toll. Yet the plan was clearly visible. With a minute to play in the first period Wasim Cheddira broke through and had his shot blocked by the legs of Unai Simon. Ten minutes into the second Cheddira was off again, only to run out of room as he closed in on goal.

For all their pressure, Spain were largely ineffectual in attacking positions. All the possession in the world isn’t worth much if you can’t do anything with it, and by the the time of the final whistle they’d managed just two shots on targets over the previous two hours – and they had more than three-quarters of it.

All too often, they managed to work themselves into a reasonable position, only for the final ball to be lacking. Spain were also more than a shade unfortunate when, with all but 30 seconds of stoppage-time played, another deep ball to the far post found Pablo Sarabia, whose shot across the face of goal bounced out off the post.

But this was also down to an extraordinary couple of hours worth of Moroccan defending. They didn’t shirk a challenge all evening and ran themselves into the ground to keep Spain at bay. All that Moroccan tenacity and hard work came to fruition with the penalty shootout. Having conceded just one goal – and an own goal at that – in his five games, Yassine Bounou had already been one of the more impressive goalkeepers in this tournament, and he stepped up in style. Sarabia, Carlos Soler and Sergio Busquets all faltered from the spot.

Badr Benoun, who’d only been brought on himself in the 120th minute, presumably in readiness to take a penalty for Morocco, had his effort saved by Unai Simon, and in the end it was down to Achraf Hakimi, born in Madrid and who had started his career at the Santiago Bernabeu, to Panenka Morocco into the quarter-finals of the World Cup for the first time in their history. It was a moment of sangfroid very much at odds with the thunderous atmosphere surrounding him.

Head coach Luis Enrique had made much of the extent to which Spain had practiced penalty kicks before the tournament, but in the end they became only the second team in the history of the World Cup to miss all of theirs in a shootout. For all the possession they enjoyed, they failed to get through a well-drilled defence and a committed goalkeeper. If you fail to do that once over the course of 120 minutes of football, you can’t really have too many complaints.

But Morocco’s defenders deserved this win. Their goalkeeper deserved it. Their penalty takers deserved it. Their incredible supporters deserved it. All concerned worked so hard throughout this match, and when the pressure was on them in the most intense way possible they kept their nerve while the supposedly more experienced team lost their heads. Morocco became the fourth ever World Cup quarter-finalists from Africa and the first from that continent since 2010. They had to dig incredibly deep, but let there be no doubt that they thoroughly deserve to be there.