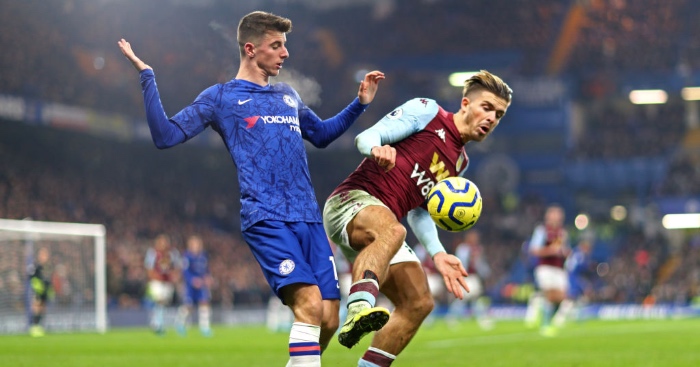 “I suppose on that you’re referring to Mason, whose only crime is not to be Jack at the moment,” Southgate said ahead of England’s 3-0 win on Thursday. “I’m also aware I should talk about Mason because then it keeps the memes going of me talking about Mason. So we have got to fulfill all those requirements just to keep the Villa fans happy, especially.”

A light-hearted, soft-pedalling response to a fabricated rivalry between England’s “messiah” Jack Grealish, and his teammate, Mason Mount, billed as Judas Iscariot.

Mount trending on Twitter during Grealish’s excellent performance in Aston Villa’s 3-0 win over Arsenal was funny. A lot of the memes, tweets and comments were funny. But as is always the case with the odious cesspit that allows morons to voice their opinion with no fear of repercussion, it didn’t take long to unearth the squalor. From patently ridiculous assertions that Mount’s “not fit to lace Grealish’s boots” to far more sinister and personal claims.

But this isn’t about social media high horses, rather an attempt to understand why there’s such hatred for a 21-year-old footballer. Is it as simple as “not being Jack”?

You’ll have to excuse the pure speculation: I think Mount is brilliant.

They’re very different players, of course. Grealish’s natural talent and aesthetic means a good performance leaves you in no doubt as to his worth to any team. But with that flair comes a mercurial quality that means the lows are lower than Mount’s, as well as the highs being inevitably higher.

Mount featured in all but two of Chelsea’s 55 games last season, starting 44 of them. This campaign – despite the influx of shiny signings – he’s played in all but one, starting 10 of the 13. Other than showing a high level of fitness, this doesn’t really prove anything other than being liked by Frank Lampard. But perhaps that’s his crime?

Lampard has claimed that he’s treated differently because he’s an English manager in charge of a Champions League club. He’s right: he is treated differently. But any ill-will is not due to his nationality, but the feeling that he was promoted above his station.

After one year in charge of Derby he was handed one of the biggest jobs in England; one that he would never have been given were it not for his previous with Chelsea and the circumstances the club found itself in. Mount has been a constant throughout that journey; Lampard’s boy has been tarred with the same brush.

Very few players emerge from the youth setup to play for the first team at a Big Six club; that’s especially true at Chelsea. Even fewer footballers go from Championship loanee one season to first choice at that top Premier League club the next. It may not have happened without Chelsea’s transfer ban and probably wouldn’t have had Mount not played under Lampard in that lower tier season.

Those factors have conspired to mean that rather than basking in the joy of seeing a young man playing for his boyhood club, as is the case with Trent Alexander-Arnold or Marcus Rashford, there is instead a lingering sense that it isn’t quite as well earned as it should be. And the fact that he grasped that opportunity with both hands somehow remains besides the point.

He got lucky, maybe, and worked to keep his place. How dare he?!

That hard graft – in football – is absurdly used to denigrate. Mount sits firmly in the makes the most of his ability camp, home to the familiar backhanded compliments Lampard was given throughout his career. Industriousness and extra miles are sticks used to beat those that deign to significantly improve their games. It’s no wonder Lampard favours Mount – he sees himself in him.

It’s nothing new: using diligence as a means to disparage. It’s similar to the man-made claims used to slight Cristiano Ronaldo when comparing him with the naturally gifted Lionel Messi. And while in other professions hard work is rightly heralded, in football it’s treated more like an effort certificate given to the div kid for turning up.

And it’s not as though Grealish doesn’t work at his game – by all accounts he too is incredibly hard working. Mount’s problem is that the endeavour is so obvious: running down lost causes; closing down defenders; tackling; intercepting; making selfless runs off the ball. That means that his excellent first touch, vision, passing range, spatial awareness and speed of thought, often gets lost amid the uglier aspects he excels in.

Mason Mount’s 2020/21 season compared to the rest of the Chelsea squad:

Fantastic, especially since the switch to 4-3-3. pic.twitter.com/oPOCp9f0X0

And anyway, that ‘ugliness’ has perhaps never before been so intrinsically linked to success: a development not lost on Lampard or Southgate. And very few can claim to be as good at leading the pressing charge, with more creativity than Mount does provide. Sadio Manes are hard to come by.

His numbers may not be near the levels of his manager at his peak, and it may be whimsical to suggest Mount will ever reach the heady heights of 30 goal contributions a season – a consistent rate that may never again be achieved by any midfielder.

But there’s some delightful symmetry between the two right now. Lampard scored seven goals and claimed six assists in the 1999-2000 Premier League season when he was 21, exactly the return of Mount at the same age last term. And with Mount moving deeper and more central, the likenesses are likely to become ever clearer. Eyebrows were raised when Lampard moved to Chelsea for £14million at the age of 23 and it took him another two seasons before he was truly on the path to become the Premier League’s greatest ever goalscoring midfielder. Mount has time and the manager to make him use it wisely.

Having plenty of substance doesn’t mean there’s no room for style. And while Mount may have more of the former, so did his manager; it’s no bad thing to be more Lampard than Grealish.