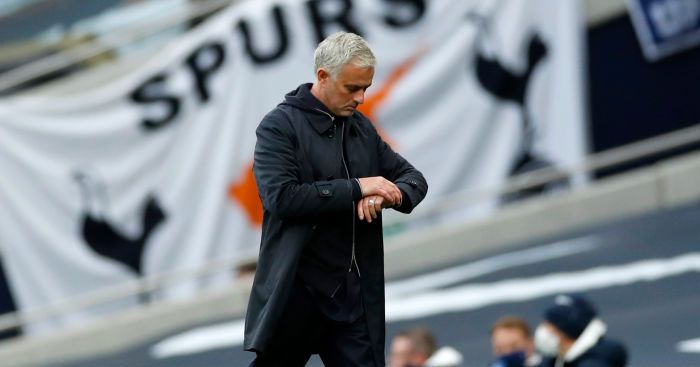 We remain deeply, deeply reluctant here to talk too much about The Handball Problem and indulge in earnest conversations about whether the game has indeed gone and whether we can ever have it back.

It’s already three million times more boring than last year’s hand-wringing over toenail and armpit offsides and that was incredibly boring indeed and went on for absolutely months as the twin, diametrically opposed camps of “All we want is consistency” and “All we want is common sense” went to war despite containing precisely the same humans just in slightly different groupings depending on who had benefited or been shafted by the evils of VAR that particular week.

So let’s instead do something that has absolutely never been done before and is in no way boring: have a pop at Jose Mourinho and his baffling insistence on pretending football hasn’t changed in any way since 2005.

We probably do need to get a few things out of the way first off here, don’t we? Yes, Spurs were insanely unlucky not to win today. Yes, that penalty is a nonsense and emblematic of a wider nonsense currently nonsensing (careful) its way around the Premier League. Yes, even the free-kick that led to the penalty was not in any way, shape or form a free-kick – certainly not Newcastle’s free-kick anyway.

And yet still we have to ask: why does Jose insist on still playing in this way, when he has a squad entirely unsuited to such tactics and a sport whose current laws and the interpretation thereof create the very high possibility of a points-shedding nonsense unfolding late in the day?

Spurs could have put this game to bed in the first half, but in the second they allowed it to drift aimlessly to its concluding sucker-punch banter. It is a genuinely mad way to play football in 2020, especially when in charge of a squad that possesses many great attacking qualities but has Eric Dier as a starting centre-back.

Even if mad penalties weren’t a thing – and it’s already clear at this early stage of the season that whatever you think of them there is no point just ignoring their existence – Spurs are entirely unsuited technically, emotionally and historically to sitting on and holding a 1-0 lead.

The risk-reward calculations are all wrong. Spurs are a classic example of attack being the best form of defence; occupying the opposition with defensive work and minimising the actual defending Spurs are required to perform is definitely their best approach. Especially against opposition as limited as Newcastle.

It doesn’t mean reckless abandon, but had Spurs tried just a touch harder for that second and third goal would they really have left themselves particularly vulnerable to disaster? And, more importantly, would that risk really be any greater than that created by maintaining only a one-goal lead and thus remaining permanently vulnerable to the perils of handball roulette?

The biggest frustration of all with this current flawed but potentially genuinely exciting Spurs team is that we all know it doesn’t have to be this way. When invited on by Southampton’s admittedly over-hospitable high line they showed how destructive they can be, and how a late stumble into the new penalty trap can be reduced to a mere footnote if you’ve already taken care of business.

Spurs had also this week shown that trying to be cute with a 1-0 lead is a task beyond them even against a team from Macedonia whose own big tactical masterplan was to hope nobody noticed if they put out slightly smaller goals.

Newcastle posed different problems for Spurs than either Southampton or mischievous Macedonian Europa League fodder, but there remains a yawning gulf between the football Mourinho wants his team to play and the most effective football for his team to play.

Mourinho seems determined to bend the squad to his will, but right now that’s only half the battle; with the shape of football as it currently is the very sport itself is against him.