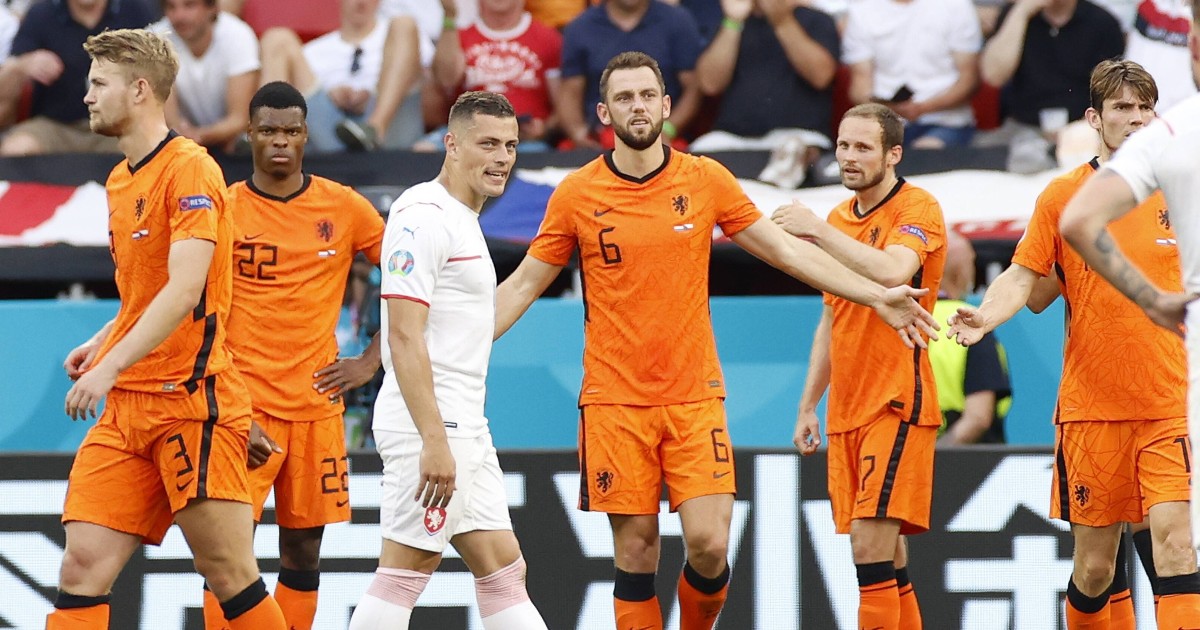 One mistake turned into two, three and four from different players as Netherlands crumbled under pressure from Czech Republic.

Some results look better in hindsight. Gareth Southgate might have nodded on sagely as he watched Netherlands capitulate against Czech Republic in a game the Dutch never sought to control. They embraced the chaos, played with reckless abandon and exposed themselves to the capriciousness of knockout football.

The highest scorers in the group stages exit without a goal in the last 16; another perfect initial record crumbled under actual scrutiny. Netherlands managed one shot in the second half as Quincy Promes had an effort blocked almost as soon as it left his boot in the closing stages.

Promes had been introduced a little earlier, around the hour mark, when the game was ostensibly level. The worst manager in Premier League history reacted to the dismissal of Matthijs De Ligt by removing a forward, Donyell Malen, for a winger. In the ten-minute spell from Promes coming on to Tomas Holes opening the scoring, Netherlands completed barely half of their passes and gradually slipped into a mid-game crisis from which they would never recover.

It started in the 52nd minute, when Malen collected a clever flick from Depay on the halfway line and burst through a static Czech defence. There were 20 or so yards, a couple of seconds and no defenders separating the forward from Tomas Vaclik yet the goalkeeper was still a few yards ahead in that battle, closing the angle, staying on his feet and making his final decision at the last possible moment. The chance had gone.

As had the match. Vaclik held the ball for a while to settle his side, rolling it out Holes. The defensive midfielder awaits sanction from UEFA for wearing the No. 9 as a defensive midfielder but he rose above that controversy by trading passes with Pavel Kaderabek before launching a long ball for Patrick Schick to chase. Matthijs De Ligt, imperious until that point, let the ball bounce once. Twice. Three times. He slipped. He palmed the ball away from underneath him. He appealed, seemingly to referee Sergei Karasev but actually to those same cruel gods that had allowed him to play so well in exchange for that one crucial mistake.

He was justly sent off on review and though the opening goal did not actually come for another 13 minutes, it started a spiral of individual mistakes that gripped Netherlands in a collective panic.

Denzel Dumfries maintained his tournament reputation with an excellent block from Kaderabek after a cross crept all the way through a crowded area to the back post. Maarten Stekelenburg spilled a simple cross. Patrick van Aanholt conceded a needless free-kick in a dangerous position. The dreadful Georginio Wijnaldum and Marten De Roon summarily failed to prevent Tomas Kalas heading the delivery back across goal. None of the three defenders on the line could keep out the subsequent attempt from Holes.

The second goal was a mercy killing; Netherlands had given up hope long before Schick kept up his personal chase of Cristiano Ronaldo with a fine finish after excellent work from Holes once more. A red card can sometimes inspire and motivate the affected team but the Dutch lacked the requisite courage to respond.

Czech Republic were utterly ruthless in exposing and exploiting the weaknesses made patently obvious by the loss of the Netherlands’ best defender. The wounded animal did not have to wait long to be put out of its misery by a team perhaps lacking comparable individual quality but imbued with infinitely more direction and cohesion. Southgate and England will know not to look beyond their task on Tuesday evening but those who do wish to tempt fate ought not celebrate another potential game against this team in the semi-final, even if this side of the draw has officially opened up.