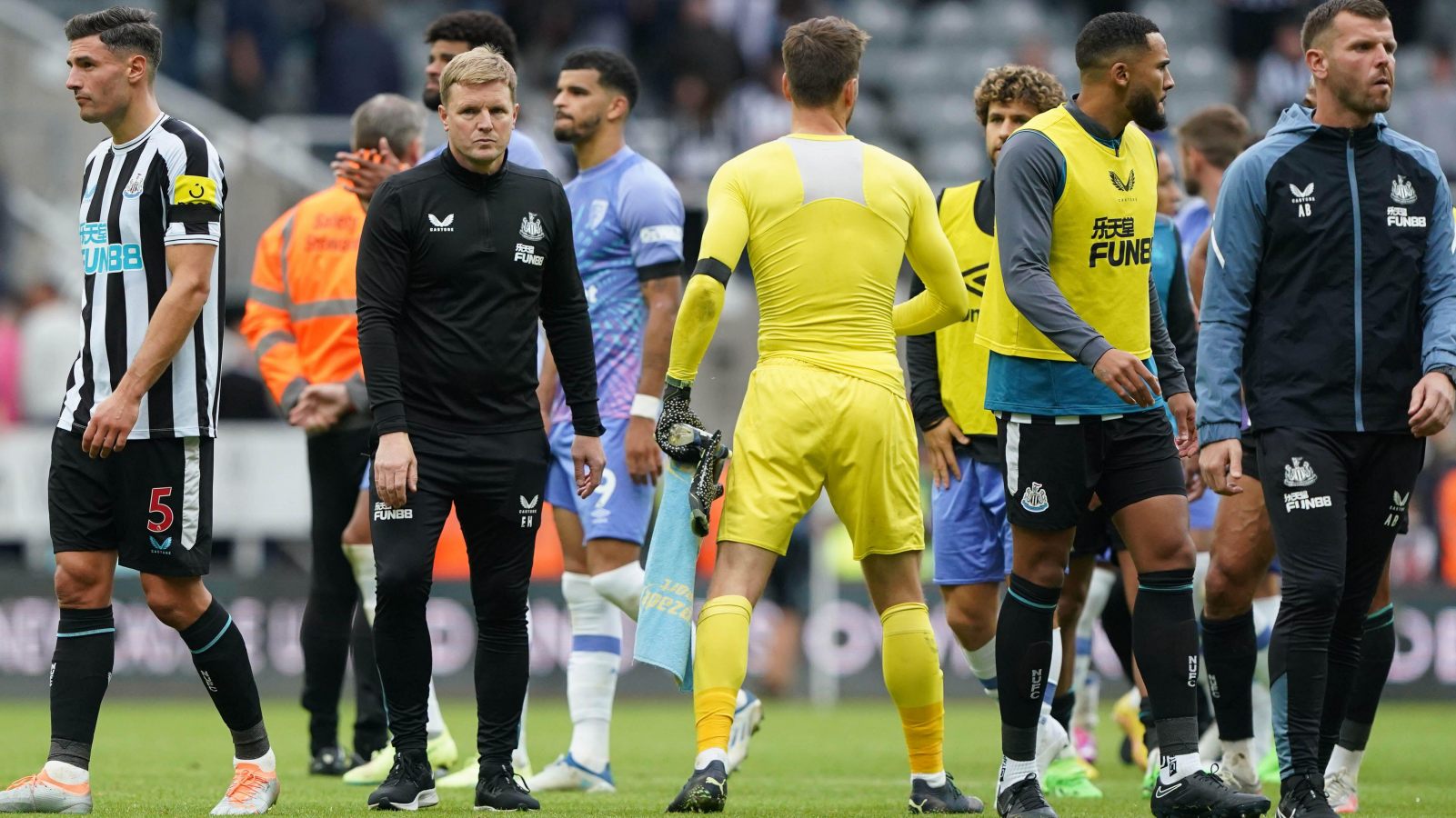 No one really knew what to expect from Newcastle at the start of the season. But it was certainly more than what they have delivered so far…

When we asked before the start of the season ‘what constitutes success for Newcastle?‘, no definitive answer was forthcoming. And Ian King wouldn’t have posed the question if we knew. What is for sure, though: it isn’t this.

A flat, uninspiring draw – another one – with Bournemouth leaves the Magpies without a win in six games since the opening day of the season. Granted, Eddie Howe’s side lost only one of those matches, and that was last-gasp defeat to Liverpool at Anfield. But five draws in seven outings since beating Forest six weeks ago leaves Newcastle fans feeling short-changed on whatever their expectations might have been during what was billed as a transformational summer.

As autumn looms, it is difficult to fathom how worried Howe should be. He will certainly be fretting about a run of form that has exposed a lack of creativity and depth in his squad; whether he ought to be concerned for his job prospects, only the Saudi owners will know. But they don’t seem the most patient of sorts.

They, like the Newcastle fans, would reasonably have expected more for their money after sanctioning the fifth-highest net spend in Europe. Howe will counter that such investment was necessary; actually, more was needed to meet the owners’ aims as fast as they would wish.

Man City beat Wolves in 55 seconds – is anyone enjoying this dominance?

The failure to land another wide attacker is looking more costly with each passing draw than it would have been to pay over the odds for the players Howe and his staff wanted. Refusing to overpay is a perfectly reasonable standpoint, but so is it that selling clubs apply excessive Toon premiums to their asking prices, knowing full well the Magpies can afford them.

Newcastle’s stance leaves Howe woefully over-reliant on the one winger consistently capable of pulling stubborn defences apart. So when Allan Saint-Maximin is missing, it makes the Magpies far too easy to contain, as evidenced once more by Bournemouth at St James.

The Cherries were far more comfortable than they ought to have been upon their reunion with their former manager. Gary O’Neil’s side played Newcastle just like Palace did a fortnight ago, when some ridiculous officiating took the focus off another performance that lacked penetration and guile. This time, VAR came to Newcastle’s aid, which was fortunate since a set-piece seemed the only likely avenue to goal for the hosts.

It was the only sight Alexander Isak had of Neto’s net, with the record signing starved of service. Ryan Fraser and Miguel Almiron grafted but neither have convinced Howe nor anyone else that they can serve as able deputies in a front three for a side with European ambitions. Behind them, Bruno Guimaraes was back from injury, but the Brazilian looked off the pace, while Joes Linton and Willock shuttled from box-to-box with considerably more energy than subtlety or invention.

When he sought to change things, Howe dispatched Sean Longstaff and Jacob Murphy from his bench. Neither will have struck fear into the Cherries. Nor would the sight of Chris Wood emerging on 89 minutes for final few of 32 crosses, 26 of which found a Bournemouth defender.

Of course, Newcastle don’t intend to rely on Wood, Almiron or Fraser. A front three of Isak and Saint-Maximin flanking Callum Wilson would doubtless make the Magpies a far harder side to contain. But, just as everyone is aware of the trio’s individual quality, we also know their fragility.

Newcastle urgently need more attacking options but if they didn’t like the prices they were being quoted during the summer, they’ve got a nasty shock coming their way in January. Especially if Howe’s side remain as simple to shackle as they currently are.