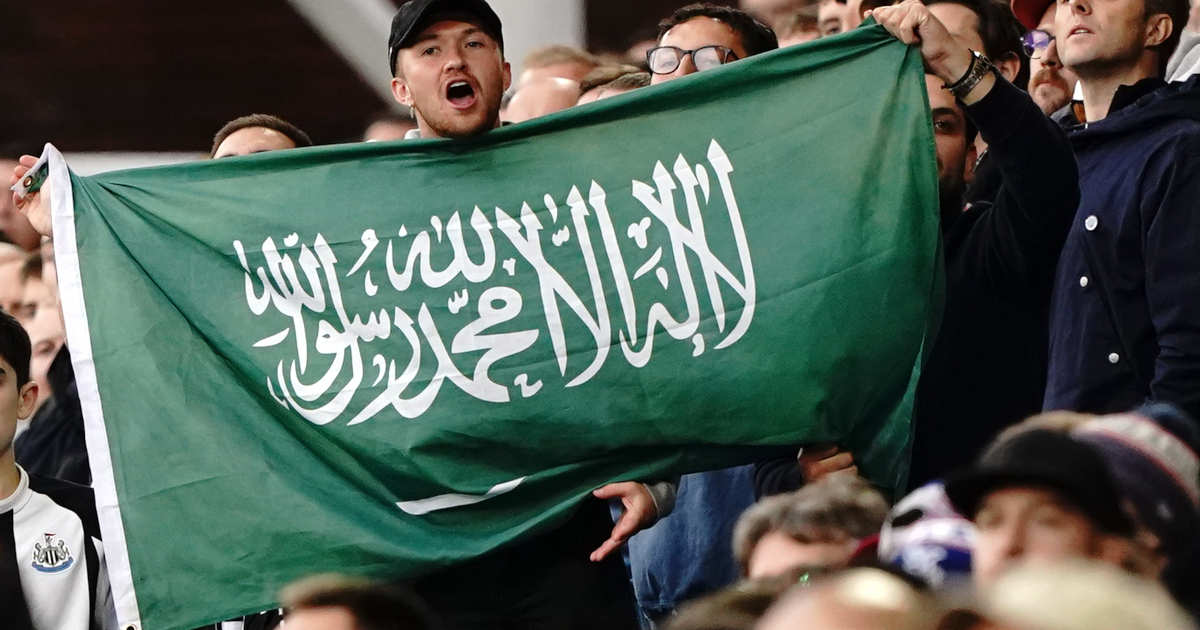 Newcastle United supporters at Selhurst Park were greeted by a banner detailing their new owners’ shortcomings, but was this egregious racism or just a blunt statement of fact?

For the first time since the takeover by the Saudi Arabian Public Investment Fund, Newcastle United have had to venture outside the north-east of England, and doing so resulted in one of the strangest days of this Premier League season, so far.

“Not since the vilification of the fans at Hillsborough (which was of course absolutely horrific and a whole different level, considering the way certain sections of the media were actually blaming the Liverpool fans for all those tragic deaths) have I seen such opprobrium heaped upon fan base.”

It’s not pleasant to have to reach for such a phrase at any point, but it’s difficult to avoid the conclusion that  a proportion of Newcastle United’s fanbase have lost their minds. The above quotation appeared in an article on the Newcastle website The Mag for several hours before finally disappearing after receiving a reception from the broader public that was as ferocious as the sentiment behind the comment was wretched. Eventually, the whole paragraph was pulled and a non-apology was placed at the bottom of the article  – in this day and age, everybody should know that ‘I’m sorry if you were offended’ counts as a non-apology rather than an actual apology – but the rest of the caterwauling, self-pitying piece remains in place.

Newcastle United’s first away match since the Saudi takeover of the club turned out to be a surreal and, its own way, worrying day. The unveiling of a banner by the Crystal Palace fan group Holmesdale Fanatics detailing the varying misdeeds carried out by the Saudi Arabian government upset Newcastle supporters to such an extent that somebody reported the banner to the Metropolitan Police and the Premier League as ‘racist’. This response seems completely oblivious to the fact that this very action encapsulates perfectly what sportswashing does, and that by calling for the censorship of criticism of the Saudis, they’re acting in exactly the way their new lords and masters do within their own borders.

The ‘racism’ angle was always likely to rear its head here, but we should probably consider what about this banner might even be considered racist. The list of unpleasant things with which the Saudi government – and by extension the PIF, since those running both are essentially the same people – contains no lies, and the image on the left can hardly be considered an offensive caricature of Saudi Arabians when it appears to be a likeness of Mohammed Bin Salman himself, rather than just a picture of ‘some Arab guy’.

Even the Arabic word on the bag translates as nothing more than ‘Riyal’, the Saudi unit of currency. Using the particular phrase ‘blood money’ – usually defined as compensation paid by an offender (usually a murderer) or his kin group to the kin group of the victim – feels apposite when we consider the case of Jamal Khasoggi, who was literally murdered on Saudi diplomatic property. It was confirmed more than two years ago that Khasoggi’s children had been receiving exactly this from the Saudi authorities. So… where is the racism in this banner? Because those who’ve been so quick to proclaim it have been somewhat slower to explain why.

It’s worth taking a step back and considering the broader perspective on all of this. What is making all of this happen? Why has discourse become so distorted that it’s almost impossible to have anything like an intelligent conversation on the subject? The most likely answer is ‘money’, which seems to have a corrosive effect on the soul of just about anybody who comes into contact with it, no matter how tangential that contact might be.

It has been said before, but bears repeating, that Newcastle supporters are almost certainly not unique in their reactions to the last few weeks of news regarding their club. They just happen to be the supporters to whom this is happening at the moment, and it has felt as though almost every article on the subject has been prefaced with the qualifier that no, Newcastle supporters should not be held personally responsible for the human rights abuses of those who now run their club.

But it’s also worth restating that while they’re not responsible for these actions, they are responsible for their reactions to whatever happens now. In his report on the match in The Guardian, Paul MacInnes described Newcastle supporters outside Selhurst Park before the Crystal Palace celebrating the abuses of their owners, as if, rather than engaging in any critical thinking about their owners, some are consciously taking the option to revel in how terrible they are instead.

Well, fine. If people want to be terrible people then be terrible people, but the rest of us can see through attempts to project these shortcomings onto everybody else through whataboutery and other logically specious ‘arguments’. Newcastle have already lost their status as many people’s second or third favourite club, but that doesn’t mean that the reaction to this has to continue to be a race to the bottom in terms of how this element of the club’s support conduct themselves.

The Premier League, who were also strongly criticised in this banner, find themselves thrown into what is likely the first to be many, many arguments of this nature. Racism is abhorrent, but baseless accusations of racism made in bad faith and solely in order to censor criticism are as well, and in the absence of being able to see what was racist in this particular banner, it’s probably down to those making the accusation to justify it. When something is egregiously racist, it’s not usually that difficult to explain why.

Should the Premier League come down on the side of the accusers in this case, they themselves will face accusations of censorship themselves. We’ll find out in the fullness of time what both they and the Metropolitan Police make of it all. In the meantime, this is the ‘new normal’ for Newcastle fans. It’s not a bed that they made, and it is a very unfortunate side-effect of football’s preoccupation with money that any of this has happened, but if the club’s new-found wealth is going to result in more ham-fisted attempts at censorship from their supporters, there will only be more criticism to come.