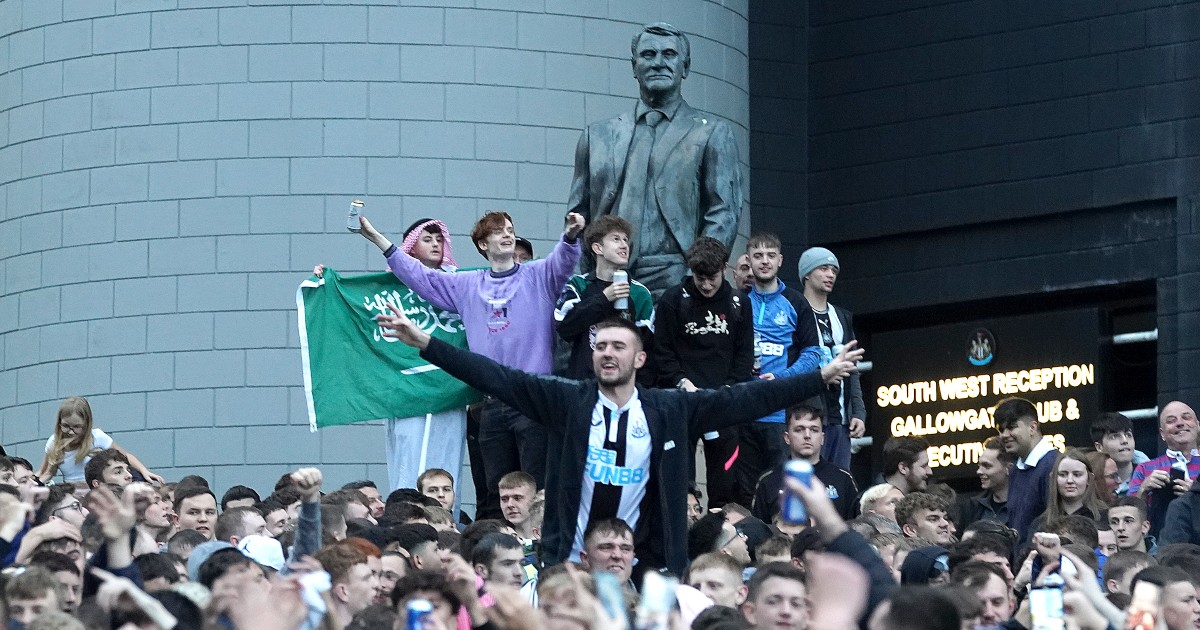 Some Newcastle fans have turned a blind eye to the takeover. There is real inner conflict for most as expectation on supporters is heightened.

First came the outpouring of relief and ecstasy, of not quite being able to process what was really happening, nor indeed that it was finally happening. Mike Ashley’s laborious 14-year reign as Newcastle United owner was over. After everything they’d been through, the supporters, who had been talked at and criticised for supposedly overinflated expectations, had earned the right to celebrate that at least.

There were thousands outside St James’ Park, down Barrack Road and on the Bigg Market singing, dancing, drinking and perhaps still now hanging pretty badly. After 18 months of hardship through the pandemic, the bars mustn’t have known what hit them. Only, they will have; this is Newcastle, a city that loves a party whatever the weather and whatever the situation. This was going to be the biggest night it had seen in years.

But as the dust settled and the hangovers subsided, many of the supporters there and across the world woke up to a new dawn. On the pitch, it could mean major new investment, Champions League football and an end to the ever-growing number of years since the last piece of major silverware. That is now as close to being guaranteed as it could possibly be in this situation. Off it, the reality is unease and inner conflict, attempting to understand and navigate the minefield of geopolitics and human rights issues that come with the new owners, a consortium 80% led by the Saudi Arabian Public Investment Fund, chaired by Crown Prince Mohammed bin Salman.

Ashley left the club in such a dire state that Newcastle fans were desperate for any sort of change. It is hard to frame this as peace in our time after the king has fallen, though, because of what is represented by at least part of the new ownership. The murder of journalist Jamal Khashoggi for opposition to the regime, widely believed to be committed on the order of Bin Salman, is particularly heinous, but there are also the atrocities committed in Yemen and treatment of women and homosexuals. Amanda Staveley, the face of this deal, has said she is appalled by Saudi Arabia’s human rights record, but claims PIF is separate to the Saudi state.

Separation on that issue, as well as the country’s long-standing piracy of beIN Sport’s Premier League coverage, were the main reasons the takeover, agreed with Ashley as early as April 2020, was held up for so long. But given how quickly everything went through after the illegalities were stopped this week, it is hard to see how separation was ever an issue. With Bin Salman connected to both the state and PIF, plenty of people will not share Staveley’s perspective on the setup.

Newcastle fans should not hide away from their new reality, and the vast majority of them won’t. There is no real defence for this and many of them have been accused of whataboutery; the harsh reality is that this is a football problem. The tiger hasn’t been fed for years. We cannot complain that it has now bitten our arm off. There are so many reasoned arguments against the takeover, but given football’s dealings in the past, other takeovers and incorporation of business and politics, and the very fact that the United Kingdom trades with Saudi Arabia, it is unrealistic and unfair to give Newcastle supporters, relieved at finally being able to envisage their team winning regularly after years without hope or direction, the sole burden of responsibility to stand up to this. Football is too far gone: ownership is a general issue that needs fixing by the authorities, not ordinary supporters.

They do have a duty, though. A duty to be conflicted. Fans should never be told not to support their club, but neither should they ignore and accommodate sportswashing. It is plain to see that is what is going on here and though many Newcastle fans are educating themselves, there are some who are turning a blind eye, too excited to care, while others embrace Bin Salman himself. Saudi flags have become a regular sight on Twitter and his is a face that has willingly become more connected to Newcastle. Football has always been about community, love and togetherness and never about ownership. In previous years it was easier to ignore. Business was silent, in the background and seldom seen. Now it is screaming from the rooftops and taking centre stage. That doesn’t mean anybody should have to fight a battle that isn’t theirs, but it is important that nothing is accepted in the name of sport.

Equally, the human rights issue is in danger of being weaponised by rival fans desperate to make a case to denounce Newcastle. The truth of the matter is many across the land would act in a similar vein if it were their club who had been bought out by this consortium. An aversion to atrocities, while extremely welcome, should be genuine and not a mere extension of tribalism.

But Newcastle haven’t got their club back, the club they haven’t had for years. This is a different, more serious kind of controversy heading their way now. They are powerful, aiming big and served by big pockets with a cost involved that can only be paid by each individual in their own way. Some fans will walk away, as is their right. Others will stay but it is not their duty to act or fight for change. Inner conflict is natural. It is okay to feel happy and concerned simultaneously. This is a new world they are entering and their club will never be the same again.