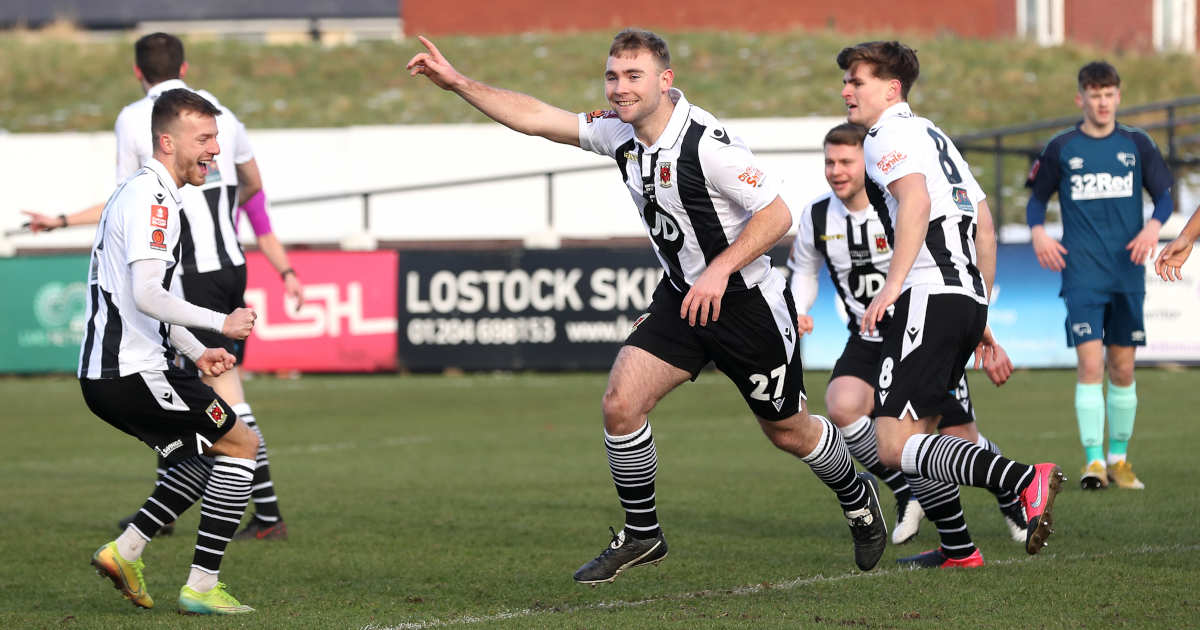 One area of football has been booming since crowds have been let back in; non-league football hasn’t seen crowds like this in decades.

On March 19, 2002, Stockport County played Manchester City at Edgeley Park in Division One of the Football League. Manchester City were on their way back to the Premier League – they’d played five out of the previous six seasons away from the top flight – and it was something of a local derby, so it was little surprise that 9,537 people turned out to watch Stockport win the game 2-1 thanks to two goals in the last five minutes.

Almost 20 years on, Manchester City are ten points clear at the top of the Premier League and are the favourites to win this year’s Champions League. On Boxing Day this season, 53,226 people saw them beat Leicester City 6-3 at The Etihad Stadium. But what of Stockport? At the same time that City were dismantling Leicester, County were playing Altrincham at home in the National League. Stockport haven’t been an EFL club for more than a decade, and they spent six of the intervening 11 years playing a level below this – in the National League North. Even so, 8,896 people turned out to see them beat Altrincham 5-1.

There is one part of football that has been experiencing a boom since crowds returned to matches at the start of this season, and it isn’t at the top of the Premier League. Non-league football clubs have been enjoying a huge resurgence in popularity and crowds for the Christmas and New Year games that took place broke records left, right and centre.

Just a few weeks earlier, the record attendance for a National League match was broken when a reduced price ticket offer persuaded 12,843 to turn out for Notts County’s game against Solihull Moors. This attendance was higher than their average 30 years ago, when they last played in the top flight, and almost a thousand more than when they played Chelsea on Boxing Day 1991. The average attendance in the National League – then known as the Football Conference – in 1991/92 was 1,221. This season’s average so far is 2,845.

These attendances are far more significant to these clubs than they would be to Premier League teams. The National League has a television contract with BT Sport, but it doesn’t earn clubs much money – just £6,000 for home sides for live matches and £2,000 for away clubs. With other commercial and sponsorship revenues also considerably lower, a far greater proportion of club revenues come from match-day revenues, both from ticket sales and catering, and with Covid-19 having blown a hole in the finances the holiday season matches offer a huge boost.

The most-watched non-league clubs are mostly former EFL sides who have fallen through the trapdoor at the bottom of League Two. There has been automatic promotion and relegation between the EFL and the National League since the 1987/88 season (one place, which was increased to two in 2003), and one of the recurring themes of the last 35 years of non-league has been clubs who’ve been relegated into it and cannot get back out. Their fulmination is frequently to the amusement of other non-league fans. Derisive use of the word ‘tinpot’ is commonplace.

But even taking this into account, the crowd figures in non-league football for this season remain remarkable. At present, there are six National League sides who have been averaging crowds of more than 5,000, but while all of them are former EFL clubs, it’s also worth pointing out that crowds of that size would be pretty respectable in League Two, and not even too shabby in League One.

But this isn’t exclusively a matter of former EFL clubs. Crowds have been rising across the board. There are now 47 clubs this season (eight of those listed in the link are Northern Irish) with an average attendance of over 1,000, and they stretch from the top of the National League to both Divisions One North & South of the North West Counties League, which are in the sixth tier of non-league football and the tenth of the English pyramid overall.

Why should crowds be rising like this? There have been some new clubs formed in areas without them. FC Isle of Man, for example, have been a striking success. And there have been reformations, seen at Macclesfield and Bury. But at other clubs, factors have included community activity, the knock-on effects of the pandemic and disillusionment with the elite level in a general sense. Many non-league clubs now position themselves as hubs of their communities, with youth set-ups and women’s teams, and an increasing number have installed artificial pitches, which can be used throughout an entire week, bringing in money while building a bond which can lead to people turning up to watch on a Saturday.

And it’s not difficult to see why the pandemic could have had a positive impact upon non-league crowds. Travelling is out of fashion, which may make local non-league clubs feel like a more comfortable fit than bigger clubs that are further away. And the very openness of most non-league grounds, especially when coupled with being able to walk around them, makes attending a non-league game feel like a relatively low-risk activity – although it should also be added that there are some all-seater grounds in the National League, many at the clubs with the biggest crowds.

Disillusionment with the professional game has been growing for years. The idea that non-league football is somehow ‘purer’ than the Premier League is only a half-truth. There has been hooliganism in the past, the administration can be shambolic and it’s certainly had its fair share of wrong ‘uns running clubs and financial doping. But it is also true that there is no VAR in non-league football, that you can stand (and walk around the ground, should you wish to), and if you’re below the second tier you can have a pint while you’re watching. And significantly, matches usually kick-off at 3.00 on a Saturday afternoon, unmoved by television scheduling and without a need to pay in advance; again, apart from the National League.

Non-League crowds in the festive period were bigger than ever before. The message we've been putting across to support your local club is getting through to the wider football public:

Some non-league aficionados don’t even really consider the National League to be true ‘non-league’ football any more. True enough, its clubs are not members of the EFL or Premier League, but the majority of them have full-time players, while the all-seater stadia, higher ticket prices and live televised matches give the league a more polished air than those below it. In some respects, it might now be considered to represent a bridge between non-league football and the EFL, even if it remains the top level of the non-league game.

Non-league football has had times like this before. Bigger crowds were commonplace until the 1960s, when the arrival of regular televised football meant that going to a match was no longer the only way in which one could watch the game regularly. The decline that followed was long and harsh, and it was only with the introduction of promotion and relegation into the League that it started to be reversed.

For all that the future of the game is talked about as being the property of a tiny number of billionaires and their overseas television audiences, perhaps we shouldn’t be so surprised that it’s enjoying a renaissance now, when we’ve been semi-detached from each other for so long, and when big clubs have been acting with such naked greed. The number of people involved probably won’t negatively impact bigger clubs, but it will make a difference to many clubs who live hand to mouth existences in a world far removed from multi-billion pound television deals. It’s absolutely not to everybody’s taste, but non-league football is proving that it still has a vital place at the heart of our footballing eco-system.