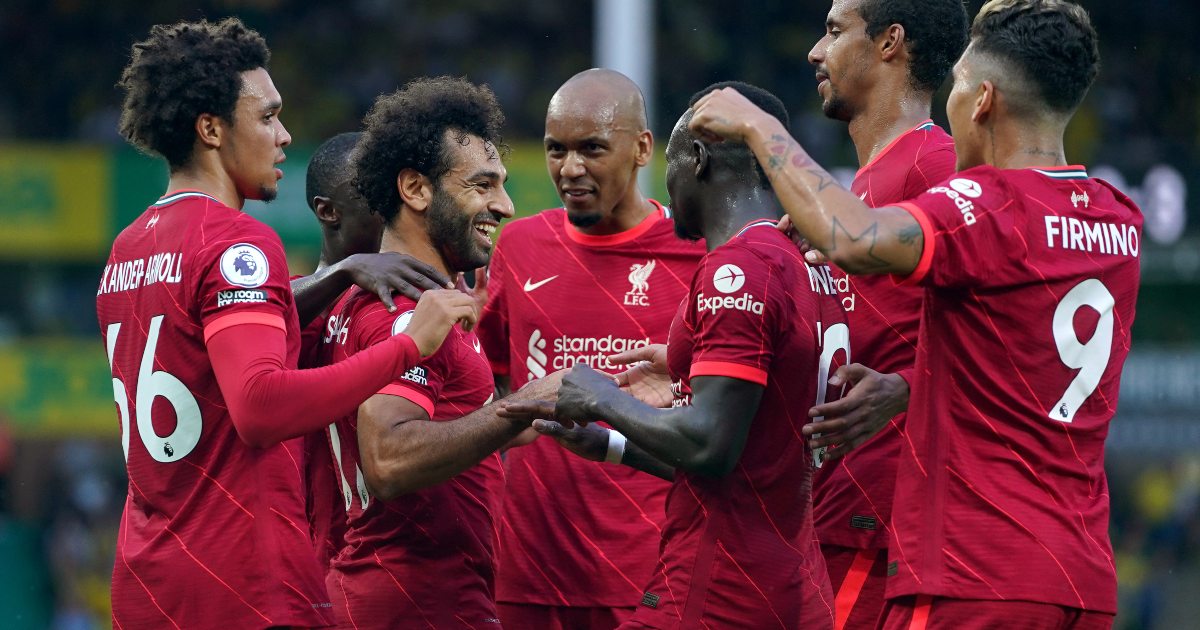 Beating Norwich is nothing new for Liverpool. This was their 13th win in 15 games against the Canaries, a run in which they have averaged three goals per game. But you cannot blame Jurgen Klopp for gleaning even more satisfaction from this latest such triumph.

The beauty for Klopp was in the simplicity of victory. Three points to start the season, with three goals from three different scorers. Three and easy indeed.

The context of the opposition cannot be ignored. Premier League new boys Norwich have endured a fraught pre-season during which Covid caused Daniel Farke to tear up his best-laid plans, meaning the Canaries were somewhat undercooked by the time Liverpool arrived to feast upon them at Carrow Road.

In contrast, Klopp has had a serene pre-season which included a four-week training camp split across Austria and France. Norwich couldn’t make it as far as a weekend in Yorkshire.

But Klopp won’t apologise for swanning through pre-season when other managers have scrambled and stumbled. Nor will he feel even a smattering of guilt for enjoying the calm around his squad given the chaos that ravaged it last term.

REACTION: Klopp reflects on ‘good start’ to season for Liverpool

At Norwich, all that misery looked a distant nightmare. It would appear that the Reds are refreshed and ready to prove us all wrong.

None of us here at F365 tipped Liverpool to regain the title and the general feeling outside Merseyside is that the Reds will struggle to keep up with their main rivals.

The reason for such scepticism was highlighted at Carrow Road. Klopp’s side contained no new signings, with Ibrahima Konate only on the bench. Their midfield, the area in most urgent need of reinforcement, was made up of two players who it was thought could leave Anfield this summer – Alex Oxlade-Chamberlain and Naby Keita – and 92-year-old utility man James Milner.

It didn’t matter that two-thirds of Norwich’s engine room was comprised of shiny new parts. Klopp’s mend-and-make-do approach was sufficient to get the job done. That is unlikely to remain true in the long term.

Klopp has two and a half weeks to address that flaw and doubts remain over whether he will be allowed to make the necessary moves in the transfer market to satisfy those looking from outside Anfield for the hint of intent to bridge a 17-point gap with Manchester City seemingly determined to widen that chasm.

Perhaps the return of Virgil van Dijk – “the best ‘new signing’ in world football this summer,” according to Paul Merson – has put Klopp’s mind at ease that Liverpool don’t need to replace Gini Wijnaldum to be better equipped than last season.

Van Dijk cruised through the 90 minutes at Carrow Road in perhaps the most comfortable return to Premier League action that he could have wished for. But his presence, alongside Joel Matip, brought back a swagger of superiority to Liverpool in their own half that was replaced by an air of calamity in his absence.

With the back door bolted shut, Liverpool could look expectantly once more towards their front three. The Reds’ attack wasn’t at its most devastating best, but all four forwards, with Roberto Firmino offering a cameo to Mo Salah, Diogo Jota and Sadio Mane, contributed to the effort.

Salah most tangibly. The Reds’ marksman established a new Premier League record by netting in his fifth consecutive opening-day encounter. His first touch to tee up a curling shot that flew beyond Tim Krul offered an insight into the benefit he may feel in coming weeks for having had a decent rest and a full pre-season this summer.

This could have been a banana skin for Liverpool, with the other two promoted sides, in front of raucous home crowds, putting big-name opponents on their backsides already for only the second opening weekend in Premier League history. But the Reds strutted around this particular hazard and into the new season with belief apparently restored.