Home F365 Says The start of something special for Antonio at West Ham? 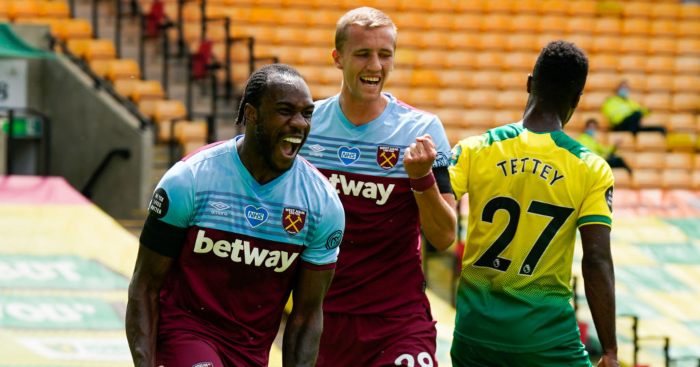 Michail Antonio has showed exactly why West Ham will be so keen to tie him down to another contract at the end of this season as he scored all four goals in a 4-0 victory over Norwich City on Saturday. The result relegated the Canaries back to the Championship after another weak performance all over the pitch.

Relegation will hit Norwich hard, especially considering the current economic uncertainty surrounding football and the wider world. However, the criticisms they took for not lavishing money in the transfer market this season could be the very thing that rescues them next season. While other clubs could struggle for money in the Championship, Norwich saved much of their Premier League pay day and, even if they lose two or three players, they should be well set to come back up.

Antonio tore through Norwich City in the first half on Saturday with his aggressive and direct running causing Timm Klose and the rest of the Norwich City defence no end of problems. On 11 minutes, Jarrod Bowen’s whipped corner was flicked on by Issa Diop and Antonio was there in the middle of the goal for a comfy finish to give the Hammers an early lead. Things turned from bad to worse for Norwich on the stroke of half-time as Antonio doubled his tally with a brilliant header from a lovely Mark Noble free-kick. The Wandsworth-born forward gave himself the whole second half to bag his first career hat-trick and he duly delivered on 54 minutes. A super little ball over the top from Noble caught Ben Godfrey out and Antonio was away, Tim Krul pulled off the initial save but the West Ham man was there to head it home on the rebound.

On 73 minutes, Antonio became the first player to score four goals away from home in the Premier League since Harry Kane plundered four on the road at Leicester City in a 6-1 victory in 2o17. Noble – who was excellent – lifted the ball into space for Ryan Fredericks, who took his time to pick out the right pass for Antonio, who directed the ball into the net with a neat finish.

4 – Michail Antonio is the first West Ham player to score four goals in a league match since David Cross against Spurs in September 1981. Quad.

That meant that Antonio had been directly involved in six out of West Ham’s eight Premier League goals since the restart, with five goals and an assist. He has impressed leading the line the absence of Sebastien Haller and the Frenchman could struggle to get back in the side when fully fit. West Ham produced a lovely display against the Canaries as they were allowed time on the ball and looked like they would score with every attack. The energetic duo of Tomas Soucek and Bowen were brilliant throughout, while Pablo Fornals and Aaron Cresswell provided attacking support, with the latter bombing up the wing at every opportunity. Norwich were a threat too going forward in the first half but there was only ever going to be one winner.

Antonio has always threatened to be great but injury issues have meant that he’s never really reached his full potential. The 30-year-old missed three months of this campaign after undergoing surgery on a hamstring injury and Antonio will be hoping this can be the start of something special. David Moyes has insisted that the club will offer Antonio – who only has a year left on his contract – a new deal when they “find out what league” they are in next season. The result at Norwich sees the Hammers pull six points away from safety, although Bournemouth have to play Leicester City at home on Sunday as they look to close the gap.

A report in The Athletic recently claimed that Antonio ‘believes he could retire at West Ham’ with the player happy in east London. Antonio has previously played at right-back, out wide as a winger on either flank and through the middle as a striker – but now could be the time to keep playing him in an unfamiliar lone striker role. His sticky hold-up play and threat inside the opposition box means he is well-suited to the role. He’s shown he can do it against a top-four side like Chelsea, providing a goal and an assist ten days ago, and he certainly impressed at Carrow Road, so why not?

Speaking during the week about Antonio – who is now West Ham’s top goalscorer this season – Moyes said: “He’s got an awful lot to offer. He’s got pace and power. He’s someone who can fill several roles, partly because of his pace. But tempering that, when you’ve got that pace and power you can suffer injuries. This is probably his best spell of games and we are beginning to see more from Micky. He’s also at an age where he’s maturing a bit.”

West Ham have dropped 24 points from winning positions this season but the clinical nature of Antonio made sure that was never a possibility against Norwich, the only team in Europe’s top five leagues not to win a single point this season from a losing position.