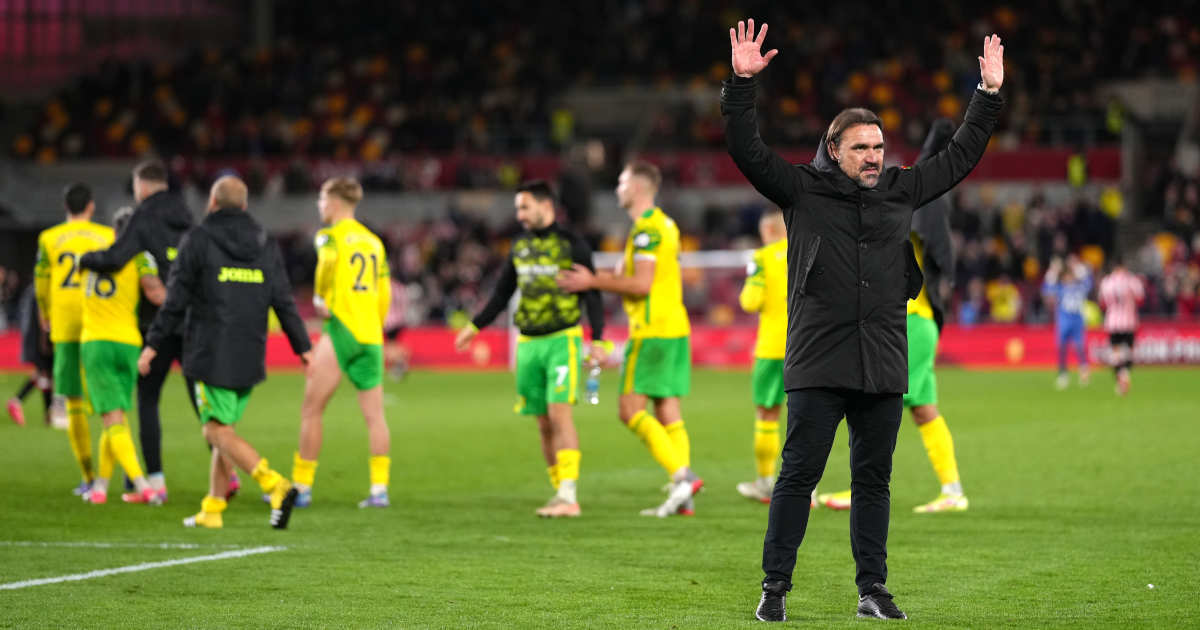 Norwich City sacked Daniel Farke after his first win of the season after saying ‘We can’t be setting targets of ‘someone’s got a game left, two games left’. So, which way now for this yo-yo club?

It was another busy weekend on the managerial merry-go-round. While Newcastle United were putting in arguably their best shift of the season so far at Brighton, there were strange goings-on in west London, where Norwich City celebrations following their first Premier League win of the season at Brentford were tempered by the somewhat strangely-timed news that Daniel Farke had been sacked, while five straight league defeats turned out to be the tipping point for Dean Smith at Aston Villa, as well.

The forthcoming international break is the most likely explanation for this sudden rush of departures, but at Norwich the timing seemed somewhat strange. They’d made harder work of beating Brentford than they probably should after having gone 2-0 up in half an hour, but it was a fairly well deserved win and even lifted them off the bottom of the Premier League table, albeit very briefly. And sacking a manager after a win always feels counter-intuitive, even when viewing the club’s through a slightly longer lens helps it to make slightly more sense.

But the comments of sporting director Stuart Webber just a few days earlier demonstrated just how quickly things can change. Talking to The Guardian in the aftermath of Norwich’s 7-0 loss at Chelsea, Webber said that:

‘To be questioning Daniel, at this point, would be incredibly unfair. We believe we’ve got everything to be an established Premier League club and at the minute we’re not demonstrating that on the pitch. But this isn’t about focusing on one man. This is about focusing on the whole. We can’t be setting targets of ‘someone’s got a game left, two games left, 10 games left, a season left, two seasons left’. We’re fully committed to Daniel, that’s why we gave him a four-year contract in the summer. The work he’s done at this club has been beyond incredible.’

But would Webber now consider himself to be ‘incredibly unfair’? Norwich lost their next match after the Chelsea match to Leeds, but their performance in this match wasn’t completely disastrous (although Farke’s post-match interview hinted at him being deeply unhappy), and things obviously improved against Brentford. The obvious question to ask is what has changed in the couple of weeks since the Chelsea result that was so much worse than that result itself? Webber’s comments at the time were fair, but in making this particular decision at this particular time, he’s completely contradicted himself. Former Norwich player Darren Eadie described the sacking as a ‘statement of intent’, but a statement of what intent, exactly?

The timing, to coincide with a two week international break, certainly seems to indicate that this was a planned decision. We might reasonably presume that this decision was taken by the club last week (even though Farke himself gave no indication of being aware of his imminent fate during his post match interview), and that they were going to pull the trigger come what may at Brentford.

But if the decision was planned, a club would usually have a replacement already lined up to slide into the job, but this doesn’t seem to be the case either. In addition to this, it has also been reported that the club is not going to be seeking a seasoned old pro for the position, which rules out people such as Steve Bruce (a former Norwich player), Sam Allardyce (formerly a specialist in keeping struggling clubs in the Premier League) or Roy Hodgson from the position.

The early favourite for the job is a name that seems likely to be connected with every managerial position that comes along until he falls into one. But is Frank Lampard the right fit for a club like Norwich? His previous managerial experience, a mixed eighteen months with Chelsea which ended with his replacement by Thomas Tuchel at the end of January, and a season with Derby County during which he was unable to get an expensively assembled team out of the Championship, doesn’t particularly seem to indicate that he is.

Daniel Farke survived four and half years at Carrow Road, winning promotion to the Premier League twice and suffering one relegation, and a club that has a reputation for being patient with managers will be an attractive option for out of work replacements. But at this stage, having made what looked like a pretty clear statement of intent just a couple of weeks ago, the decision to fire Farke in itself throws that reputation into some degree of jeopardy.

Norwich City have already come in for a lot of come in for a lot of needlessly aggressive criticism this season, as if they were spoiling the view of some Premier League watchers. It was understandable that the club should have been stung by such criticism, but to come out and rebut such criticisms so forcibly, win a game and then sack the manager might even hint that, if the club is unhappy with its role as a ‘Premier League-Championship yo-yo club’, then they’re going to need to adopt another identity, and the risk there is that the easiest identity for Norwich to slip into at this precise moment in time is that of ‘another club that couldn’t settle in the Premier League and is now back amongst the flotsam & jetsam of the Championship’, rather than ‘former yo-yo club that is now settled in the Premier League’.

The Athletic reports that there is now a shortlist of two managers, both of whom are described as ‘modern, forward-thinking coaches’, and that a decision will be taken before the end of the international break. The identity of these two are a mystery, but among those mentioned have been Kjetil Knutsen of Bodo/Glimt, who’s impressed in the Europa Conference League this season, the Coventry City manager Mark Robins and Swansea City’s Russell Martin.

Add Lampard to that mix, and it seems likely the next incumbent will be one of those four. They’ll have their work cut out. Three teams have to fall at the end of this season, and Norwich remain heavy favourites to be one of them despite their win at Brentford. The mixed messaging from the club over the last fortnight has given the impression that the club isn’t quite as sure as we might have believed about what its future direction might be.