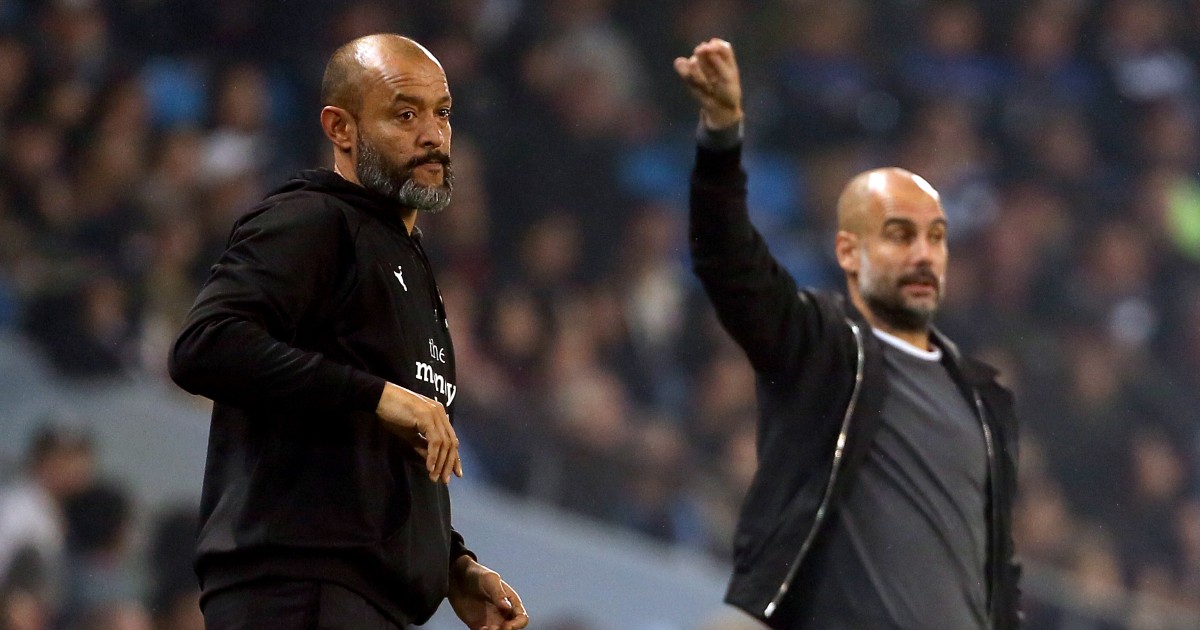 Pep Guardiola has done little to address the flaws in his Manchester City team that Nuno Espirito Santo is capable of exposing with Tottenham.

In the hunt for a new manager, Daniel Levy promised Tottenham Hotspur fans a “return to playing football with the style for which we are known – free-flowing, attacking and entertaining”. Considering his broken promises and general mismanagement nobody was surprised when the Spurs chairman failed to deliver.

This has been a catastrophically bad year for the club and with Harry Kane still in a flounce it could get worse before the month is out. Tottenham supporters deserve a bit of optimism – and on Sunday they might just get it. Nuno Espirito Santo isn’t the manager Spurs fans wanted but he is the right sort of tactician to win ‘Big Six’ matches like these.

Manchester City are more vulnerable than one might think. Last November, sat in eighth on 20 points from 12 matches and with just 101 from the previous 50 games in the Premier League, there was a sense an era might be coming to an end. Central midfield had looked soft since Fernandinho’s decline (the Gundogan-Rodri axis wasn’t the best at stamping out counters) and they were becoming a caricature of a Pep Guardiola team: everyone a silky all-rounder, no-one an explosive individualist.

What happened next is arguably Guardiola’s greatest ever achievement but the unique variables of pandemic football are hopefully behind us. As hard-pressing football and emotional capacity crowds return there is every chance Manchester City’s issues of autumn 2020 will return. Certainly signing Jack Grealish does nothing to address the problems through midfield or the waning enthusiasm for the high press. With six first-team regulars in their 30s Manchester City might be a little tired of Guardiola’s demanding style.

Nuno and Spurs are perfectly placed to reveal these flaws. His Wolves team beat Manchester City twice in 2019, winning 3-2 at Molineux against ten men and 2-0 at the Etihad, the latter result in particular providing the tactical framework ahead of Sunday’s game in north London. Wolves held 24% of the ball, sitting in a hunched and compressed formation that successfully lulled Guardiola’s side into quiet and aimless possession. Without Kevin de Bruyne – also absent this weekend – and with Wolves’ three-man midfield working hard to shut down the half-spaces, Manchester City were flummoxed.

Tottenham will similarly sit deep and wait for chances to counter-attack directly through Manchester City’s high defensive line. Although they don’t have the trickery of Adama Traore there is plenty of pace in Nuno’s Kane-less front three of Steven Bergwijn, Heung-min Son and Lucas Moura. Keep an eye out for raking long balls over the top of the defence as Spurs look to hit quickly on the break.

Should Spurs be successful then undoubtedly the key man will be Dele Alli, an enigmatic figure with a habit of becoming an emblem of whatever the club is going through. The golden child under Mauricio Pochettino and the outcast under Jose Mourinho, Dele is already centre stage in the new regime: deployed in a hybrid central midfield/number ten role as Tottenham’s formation swings between a 4-3-3 (off the ball) and 4-2-3-1 (on the ball).

Dele will play a crucial role, then, both in shutting down the half-spaces – where Manchester City primarily look to create – and being the link man when counter-attacking opportunities arise. He will need to pull away from Rodri in central midfield to play clever slide passes through to the front three.

But this is only one possible tactical direction of Sunday’s game. The alternative, and simpler, view is that Tottenham don’t quite have the personnel to cope with the attacking riches at Manchester City. Japhet Tanganga’s battle with Grealish is only likely to go one way, for example, while there is a notable weakness in the Tottenham midfield that could allow Gundogan to flourish. Oliver Skipp is in line to start after an impressive pre-season deputising for the injured Tanguy Ndombele but his presence in the middle will give Manchester City fans optimism.

Nevertheless there is reason to believe this could be Tottenham’s day. The return of supporters is likely to skew the competition back in favour of home teams, particularly in these first few weeks as players readjust after 12 months of quiet, and Guardiola has already warned that his team are likely to get off to a slow start given the number of international tournaments played this summer.

Manchester City were barely at half-strength in the 1-0 defeat to Leicester City. They need to be significantly better on the opening day of the Premier League season if Guardiola is to avoid another Nuno humbling.