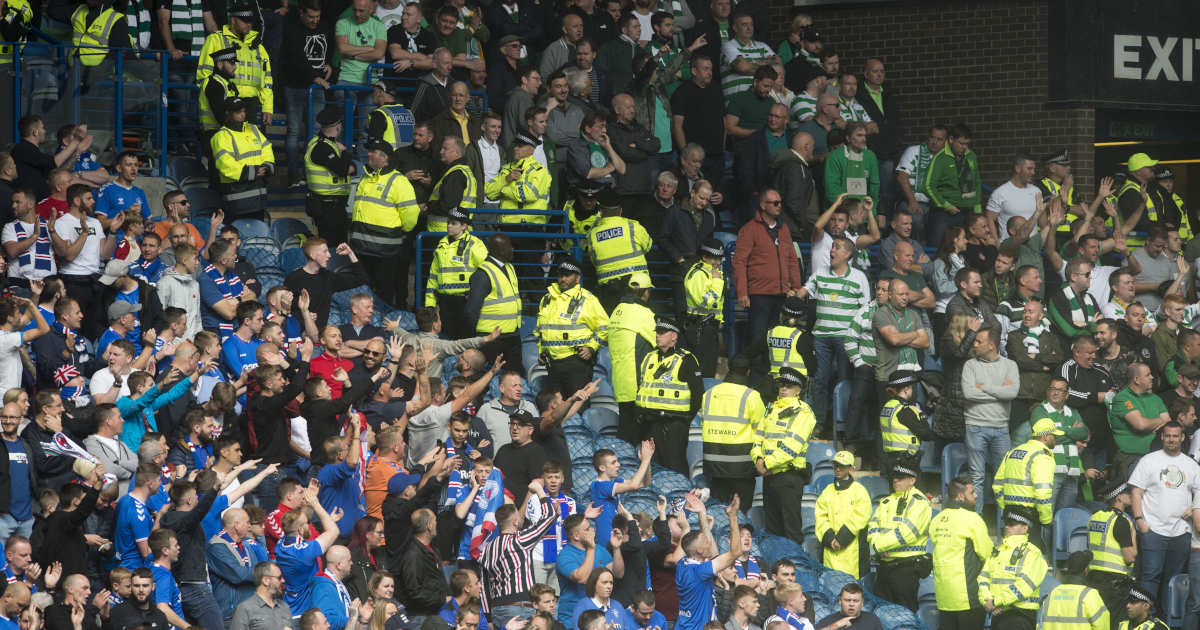 Celtic and Rangers have a rivalry that goes back to 1888 but they’ve never played abroad. Now they’re going to, and the fans aren’t happy.

The origins of the phrase ‘The Old Firm’ in relation to Celtic and Rangers aren’t absolutely clear, but it’s unlikely that it was intended as a compliment. Some have claimed that this nickname emerged because both clubs were amongst the founder members of the Scottish Football League in 1890, but its first recorded usage is generally credited to a cartoon which appeared in the popular Scottish Referee sports periodical ahead of the 1904 Scottish Cup final between the clubs, depicting a pipe-smoking human sandwich board, bearing the message ‘Patronise The Old Firm’, in reference to increasingly regular and lucrative meetings between the two clubs.

118 years on, the battle lines of this particular rivalry have been redrawn (the foremost issue dividing Scotland at the end of the 19th century was amateurism vs professionalism, which is the reason for that famous 1904 cartoon) but it remains as intense as ever, and it takes something to make the supporters of both clubs bristle at the same time. But somehow they’ve managed it with the breathless announcement of the first match between the two teams overseas. Celtic and Rangers have been invited to make up a four-team mini-tournament in Australia in November also featuring Sydney FC and Western Sydney Wanderers, and both seem to have accepted the offer.

Both clubs stand to make a decent pot of money from their trip, but money isn’t really the point for the supporters. The commoditisation of the rivalry has stuck in the craw of many, with the prevailing view being that there can be nothing ‘friendly’ about Celtic playing Rangers. Many Celtic fans refuse to acknowledge that the Old Firm even exists anymore, following the Rangers liquidation of 2012, and this has even been argued in the past by the club itself, although this was undermined a little when it emerged that the trademarks over ‘Old Firm’ and ‘The Old Firm’, which had been jointly held by Celtic and Rangers since the turn of the century, had been renewed just a few days before the club sent its tweet.

Rangers supporters are none too happy either. A poll on the Follow Follow forum showed 95% of just over 2,000 voters against the idea. The reasons given by fans on the forum are varying (many of which can’t be repeated on here, such is their nature), but also include simply not wanting to be associated with each other, and the perception that, as the Celtic manager Ange Postecoglu is Australian and coached their international team at the World Cup, they are being invited along to a party in honour of someone perceived to be an enemy. But for all the partisan reasons from both sides, the objection of many could probably be best summed up in the words of one disgruntled Rangers supporter: ‘Rangers would sell the sugar out of our tea these days for a quick buck.’

The timing of the tournament is certainly odd. The match between Celtic and Rangers is scheduled for November 20 and this is the day before the World Cup finals are due to start in Qatar. Both clubs will have players who are going to these finals – Scotland themselves may yet do, should they get past Ukraine and then the winners of the match between Wales and Austria – so it’s hardly like these two clubs will be sending a full-strength squad to the other side of the world.

So why are they doing it? The answer is obvious: money. Celtic and Rangers are both enormous clubs with global fanbases, but they play in the SPFL and that stifles their growth in a world in which television contract money trumps matchday revenues. The SPFL’s current television deal is worth £30m per year, which places it between the Danish Superliga and the Romanian Liga 1 in the league table of annual television rights.

There is much to admire about the way in which Scotland distributes its television money. The difference between finishing bottom of the top and second tiers is £500,000 in Scotland as opposed to £93million, as it is in England. But even with only 12 teams, £30m doesn’t stretch very far, and Celtic and Rangers earn either £5m or £4m per season in SPFL prize money, depending on whether they finish first or second in the table, and a little extra from overseas sales, but the big prize is in European football, which has the knock-on effect of making their domestic league title race important for reasons beyond mere bragging rights.

A place in the Champions League group stages is the ultimate financial prize, being worth a minimum of £13.4m for qualifying, with each win being worth £2.4m and each draw worth £804,000. As such, it might be argued that the big matches of the season are the Champions League, played at the very start of the season. Celtic lost to Midtjylland of Denmark in the Second Qualifying round and Rangers lost to Malmo in the Third Qualifying Round this season but Rangers remain in the Europa League afterbeating Borussia Dortmund in a play-off for a place in the last 16. Celtic, meanwhile, were eliminated by Bodo/Glimt in the Europa Conference League play-off.

Both teams have made more from their European trips than from their domestic television contract, but nowhere near the tens of millions of pounds that come with Champions League entry, unless Rangers can continue to progress in the Europa League. Such financial constraints demand a certain amount of inventiveness in the transfer market. It’s certainly a different financial plane to being in the Premier League in England, and the desire to make more of it in order to improve is understandable.

But this does seem like a tone deaf decision from both clubs. Neither sets of supporters want a ‘friendly’ match against the other, even if it’s packaged as part of a mini-tournament. Celtic and Rangers already play each other four times a season in the league and meetings in the cups are not uncommon. And with their best players away on World Cup duty, it doesn’t exactly even feel as though Australian supporters would be getting a particularly good deal.

And then, of course, there’s the fact that they are flying to the other side of the world for three friendly matches when they could be actually taking advantage of a break after a punishing schedule over the previous two-and-a-half years. Clubs complain about fixture congestion all the time. These fixtures are exactly why so many give clubs such little shrift when they start doing so. They’re football with their context stripped, played for the sake of money alone.

There were protest banners at Celtic Park during their match against St Mirren. Live on Sky Sports, Rangers supporters were very loudly telling the directors of their club where they could ‘shove’ their ‘f**king friendly’. Whether you wish to call it the Old Firm Derby or the Glasgow Derby, the rivalry between Rangers and Celtic is not a theme park, and it is fundamentally disrespectful to the supporters of both clubs to treat it as such. It needs to stay in Glasgow.