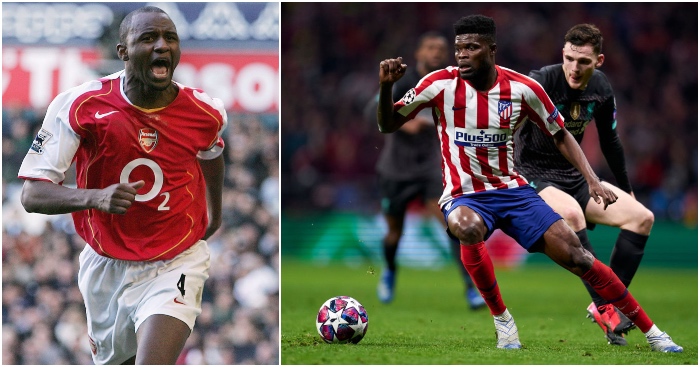 Since Patrick Vieira left for Juventus in 2005, Arsenal have spent £130million on 12 players you could conceivably claim were bought as a direct replacement. But forgivable initial comparisons between Abou Diaby or Francis Coquelin and the colossus they succeeded are now half-baked and simplistic beyond any excusable degree. Thomas Partey is not “a modern day Vieira”.

“I watched him when they played against Liverpool at Anfield last season and he was absolutely fantastic, he tore Liverpool apart. For me, he looks like a modern-day Vieira, and I know that’s a big statement, but he looks the real deal, this guy.”

Without wishing to cast aspersions on Mr O’Hara in particular – he simply has a platform to voice a widely-held view to the nation – this is a lazy, out-dated and uncomfortable comparison.

Firstly, to equate a modern-day player with another from 15 years ago makes very little sense. We’ve been through several iterations of football in the interim: tiki-taka; Gegenpressing; false nines; raiding full-backs. We have seen formations, positions and roles greatly altered. There was no-one like Vieira when Vieira was playing, let alone now, when that sort of player doesn’t even really exist.

He played as one of two central midfielders for Arsenal – alongside Emmanuel Petit and then Gilberto Silva. He was arguably the slightly more attacking player in both of those partnerships, but was expected to evenly split creativity with his defensive duty.

Kevin De Bruyne, Paul Pogba and Gini Wijnaldum may be known as box-to-box midfielders, but the label means something very different now than when it was used to describe Vieira. All three of those players have a far more defensively-minded teammate alongside them and are heralded for their attacking influence far more than their tough tackling or work in their own third. Leon Goretzka is perhaps the biggest throwback to the original Vieira-like box-to-box midfielder.

But the vast majority of midfielders are now trained and bred into pigeonholes: DMs; CAMs; RAMs; LAMs. Even the CMs aren’t really CMs, more LCMs and RCMs. Partey has played as a DM for Atletico, after a successful spell as a CAM on loan at Almeria, but what would Vieira be? He would likely prove successful anywhere across a midfield three, but also as one of a deeper-lying duo with a No.10 ahead of him. But he would be a very different player in any of those positions; that is the point.

Secondly, O’Hara’s view is clearly based on one – admittedly outstanding – game against Liverpool in the Champions League last season. We love knee-jerk reactions; they’re a big part of sport and a big part of football in particular. But some recognition of a lack of knowledge, an ‘I haven’t seen much of him but…’ precursor, would have been welcome. Particularly when that admission of ignorance makes the Vieira similarity ‘revelation’ an especially uneasy one.

If someone has watched a lot of Partey for Atletico Madrid and his play reminds them of Vieira, there’s no issue. Comparing and contrasting is a useful tool. Partey’s ability to dribble past people to break the press and start attacks, for example, is very like what Mateo Kovacic does when at his best for Chelsea. But when the person claiming a resemblance has barely watched that player, the parallel drawn drifts from hard evidence towards snap judgements inevitably based on superficial factors. Namely, what they look like.

There are similarities between Partey and Vieira: the aforementioned dribbling prowess; a deceptive grace in possession; an eye for a goal. But they are very different footballers.

After the Ghanaian’s controversial transfer was confirmed, Arsenal’s technical director said: “Thomas has all the right attributes to be a top player for Arsenal. He is a leader on and off the pitch and he is exactly the kind of player and person we want at the club.”

Finally a leader, like Vieira. Well no, not like Vieira. Partey’s not vocal; he’s not going to shout at teammates, give a passionate half-time speech or rile rival players in the tunnel before a big game. In Spain he’s regarded as a quiet, unpretentious, low-maintenance individual; he leads predominantly by example.

Although his physique means Partey is difficult to knock off the ball, he’s not a midfield powerhouse like Vieira. He’s a calming presence: smooth and methodical in all that he does, on and off the ball.

Vieira, by contrast, mainly due to the era in which he played, was up-and-at-them, all-action. There was a pacifying quality to his game, but it was often withdrawn, with the chaotic nature of English football at that time – characterised by lost possession and second ball after second ball – rewarding high-energy friskiness.

Vieira would often be seen as the furthest forward of any Arsenal player, slotting the ball past the keeper when through one-on-one. Partey won’t do that. Any goals he scores will more likely be long-range piledrivers, at which his predecessor was also admittedly pretty proficient.

Partey is an undeniably exciting signing, and certainly one Arsenal needed. As the base of a midfield three, he can provide something they’ve been missing for years: cover to snuff out attacks and protect the back four, allied with a superb range of passing, the desire for forward progression and the skill to see it through.