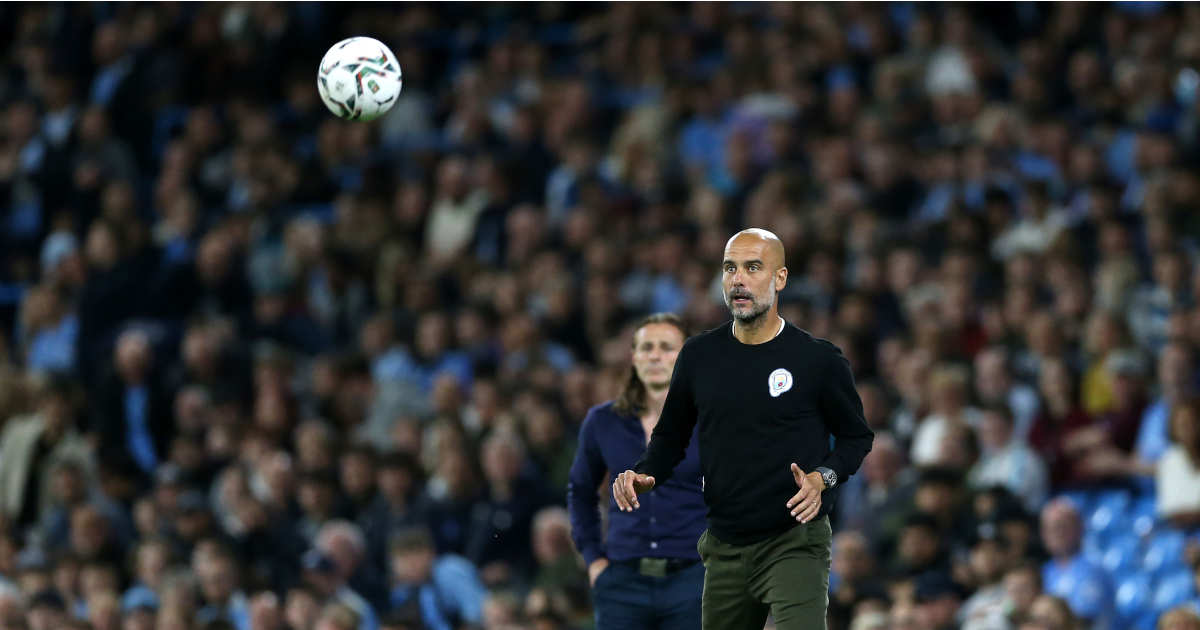 For someone who wants for little as a coach Pep Guardiola often doesn’t seem very happy, and his latest comments will anger a lot of people.

If there was anyone in the professional game who embodies the old adage that money can’t buy happiness, it’s Pep Guardiola. Signed into Barcelona’s youth system at 13 years old, he stayed 13 years at Camp Nou before seeing out the end of his playing career in Italy and the Middle East and being welcomed back into the fold at Barcelona as a coach. Throughout a managerial career that has taken in Barca, Bayern Munich and Manchester City, it’s reasonable to say that he has seldom wanted for much.

But somehow, Pep often seems incredibly unhappy. Last week, he was annoying fans of his own club with comments over empty seats at The Etihad Stadium for Manchester City’s Champions League match against RB Leipzig, and this week he’s been annoying the supporters of all clubs below the big six by calling – yet again – for academy sides to be able to compete in the EFL. Coming on top of the debate over axing the 3pm blackout – which is still ongoing – for supporters of smaller clubs it’s starting to feel as though this battle to justify their ongoing existence is now perpetual.

It’s now been 11 months since Project Big Picture, the scheme devised by Manchester United and Liverpool which intended to give overall control of the entire game in England to a small number of clubs in return for some fuzzy ‘promises’ about the redistribution of money. The idea was dismissed. 14 of the 20 clubs in the Premier League hadn’t been informed, and there was widespread apoplexy at the sheer arrogance of a small number of football clubs seeking to bend the entire direction of the game in this country to their will.

But the attacks haven’t stopped. There appears to be a concerted effort on the part of a small cabal of individuals and groups to buy football, to own the game lock, stock and barrel. In April, the European Super League briefly flew its flag. This was, essentially Project Big Picture: European Edition, a land grab devised by a group of the biggest clubs designed to entrench them at the top of football’s food chain in perpetuity. After protests at grounds the invited English clubs soon reversed their positions, leading to the swift collapse of the project, but the idea that extremely rich men somehow deserve to completely own our game hasn’t gone anywhere.

It should go without saying that Pep’s comments are disingenuous in the extreme. The argument that handing control of football to the biggest clubs would be for the benefit of the national team is one of the oldest canards in the book. It’s exactly the same argument that was made for the Premier League in the first place, but as soon as the league had ratification from the FA all promises to reduce the number of clubs were quickly brushed under the carpet. Needless to say, the creation of the Premier League did not bring about an improvement in the fortunes of the national team.

But when the argument goes down this route, it’s already playing into the big clubs’ hands. The national team argument overlooks the fact that England reached the semi-finals of the last World Cup and the final of the last Euros. There is no need to radically overhaul the English league system for the benefit of the men’s national team. They’re doing fine, thank you very much.

And the argument that his academy players would benefit from more game time in the EFL is easily countered by suggesting that, if he wants his players to get this game time, he could loan them out or sell them to EFL clubs and then re-sign them should they make the grade. The best players would still all end up with the same cartel of clubs, but at least smaller clubs would be properly compensated for the role they played in developing them. The biggest clubs have been stockpiling young players for years, and the idea that the rest of the league system should contort itself so that they can continue to do so is perverse.

It’s hardly as though there aren’t examples of what all of this might look like close to home. The EFL Trophy controversially allowed Premier League academy sides to enter in 2016, and the resulting boycott led to extraordinarily low attendances for matches, including a record low crowd for Grimsby Town for a cup match (609, against Leicester City Under-23s), the second lowest attendance in Port Vale’s history (1,025 for their match against Mansfield Town) and a record low attendance for Portsmouth, when just 1,355 turned out for their match against Reading Under-23s.

In Scotland, meanwhile, the constant nagging of Glasgow’s two biggest clubs finally reaped rewards at the end of last season, when it was confirmed that Rangers and Celtic would both be allowed to play their B teams in the Lowland League for one year only, with the league desperate for money. The league hasn’t been publishing attendances but this decision is already causing consternation.

Rangers B team have scored 31 goals in their last five games and seem set to dominate the league this season, and it’s possible that both teams could be thrown out of the competition. They’re both eligible for promotion to League Two and the SFA are reportedly unhappy with new rules that would allow the Lowland League to choose their own champions to go into the Scottish pyramid’s play-off game against the Highland League winners. There is at present every possibility that both teams could be chucked out of this competition before the end of their first season. But for Rangers and Celtic, all of this may already be considered mission accomplished. They’ve got their foot in that particular door.

But by counterpointing Guardiola’s arguments with specific examples, we are giving false legitimacy to them. It should be a reasonable point of principle to argue that the EFL and non-league football do not exist to facilitate the continued growth of football clubs that are already too bloated with money and who already enjoy every competitive advantage that a football club could ever wish for. It should not be considered radical to argue that the solution to questions thrown up by the staggering inequality within football is not even greater inequality, in return for them throwing a few crumbs for their table.

Guardiola finished his complaint by saying “but I am not here to change anything of this country” before going on to riff on another familiar complaint, that Premier League clubs can only make three substitutions in a game, rather than the five that many other leagues allow. Eagle-eyed readers will already have noted that this would be yet another change to the rules that would benefit him to the detriment of every other club, but these complaints only mean anything if others start to act upon them. In the meantime, it’s high time that Pep Guardiola started to understand that the rest of English football is not a mere bit-part player in the movie of his life.