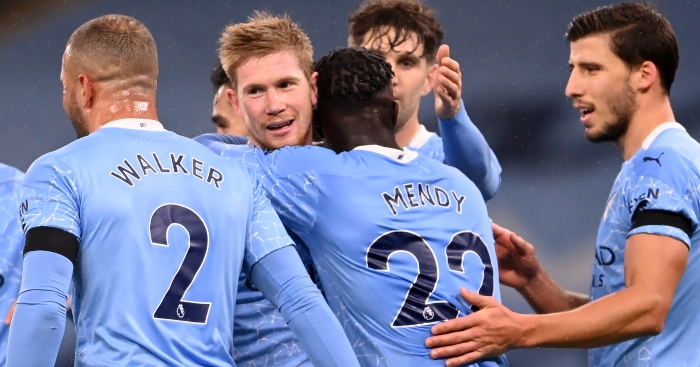 Perhaps not even Sean Dyche’s wife has ever been so pleased to see the Burnley boss as Pep Guardiola was to greet him at the Etihad. Amid his worst start ever start to a season as a manager, Guardiola needed a friendly face and the Catalan coach knows few more as accommodating as his Clarets counterpart.

On their last three visits to see Pep, Burnley have rolled over and allowed City to score five without inconveniencing them with a reply. With Guardiola’s men enduring their most barren run, having scored just 10 goals this season, Dyche came once more bearing gifts: three points, another five goals and some glorious respite.

City, in 14th place at kick-off, were certainly in no position to look a gift horse in the mouth and they gratefully seized their visitors offerings. Creativity has been a huge concern for Guardiola but Dyche’s men saw to it that the City boss need not worry himself during a first 45 minutes which made the second a blissfully serene experience amid the frenetecism of the truncated season.

Burnley went all of five minutes before their generosity got the better of them. James Tarkowski gave the ball away in his own half, which allowed Ferran Torres and Kevin De Bruyne to sweep the ball across to Riyad Mahrez. In glorious isolation, in an inside-right position with a perfect arc between his left foot and the far corner, even accounting for City’s current wastefulness, the Algerian was never going to miss.

And so it was for Mahrez again midway through the first half, when Burnley really spoiled City with their munificence. Charlie Taylor and Ben Mee were happy to look the other way while Mahrez wandered across the visitors’ defence to receive Kyle Walker’s throw-in near the byline. From there, he made the return journey with the ball before placing it in the same corner of Bailey Peacock-Farrell’s net.

2016 – Riyad Mahrez's second strike against Burnley was the first goal Man City have scored from a throw-in in the Premier League since April 2016 against Bournemouth (Aleksandar Kolarov). Delap. #MCIBUR pic.twitter.com/86oL78XFW8

Burnley were clearly in no mood to be any trouble to their hosts. Before the break, they allowed City to sweep through the thirds, never needing to stray straying beyond the width of the penalty area, with the ball going from Ederson’s feet to Peacock-Farrell in five passes. At no point in a move which involved Rodri, Gabriel Jesus, De Bruyne and finished with Benjamin Mendy scoring his first Premier League goal did Burnley get within five yards of a blue shirt. Social distancing at its best; defending at its worst.

The pattern was repeated after the break. Ferran Torres was allowed to pick his spot for four; Mahrez was gifted a free header for the fifth with his hat-trick clincher.

City were wonderful hosts but Burnley really were the perfect visitors. It is hard to decipher just how impressive Guardiola’s side were because there was such little resistance before them.

Not that that will bother Guardiola. The relentless nature of this strange season offers even over-thinkers like Pep little time to dwell upon such matters. The City boss should allow himself a moment, though, to reflect on a rare positive at the start of a period which provides his side the opportunity to claw back some lost ground.

This was the first of five games in six which City play in Manchester, with the only time they have to stray beyond the city limits being when they go to Porto in midweek. Top spot in their Champions League is still to play for but qualification for the last 16 is already assured.

Guardiola has taken to resting his stars in shifts, with De Bruyne and Walker allowed to skip the trip to Olympiacos in midweek, while Raheem Sterling and Aymeric Laporte got to rest their weary legs today. So too did Foden until the hour mark as he began on the bench again for the fifth successive Premier League game.

Sterling must have been itching to join Foden given the chances Burnley were offering City’s attackers to get their eye in after their recent struggles. But Guardiola has the bigger picture in mind and with this the first of 10 games in 31 days, Sterling and Foden will see plenty more action.

Not every opponent will be as amiable as Burnley today – surely none will – but this now-customary victory over the Clarets could help City settle back into some of their other familiar routines too.