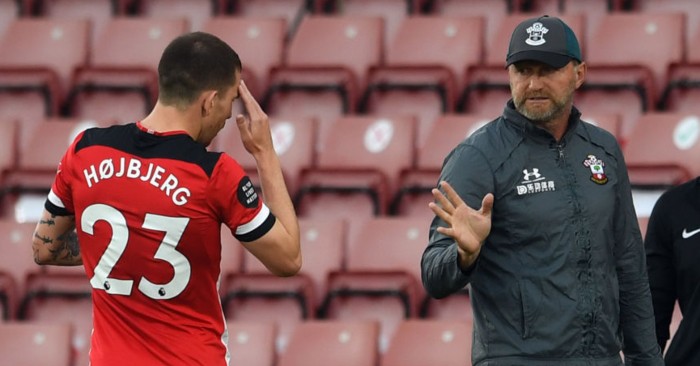 Reports are flooding in that Southampton midfielder Pierre-Emile Højbjerg has agreed terms with Everton and both clubs have agreed a £25m fee. So why might you struggle to find the usual anger and panic when surveying fans on the south coast?

Is Højbjerg a good player? Yes. Has he been an important part of the team’s rejuvenation since Christmas? Again, yes. So, what gives?

Southampton have been operating in fear of the circling vultures since their return to the Premier League in 2012. A joyous season under Mauricio Pochettino in 2014 led to a fire sale of unforeseen magnitudes that summer, seeing the departures of Rickie Lambert, Adam Lallana, Dejan Lovren, Luke Shaw and Calum Chambers, as well as Pochettino himself.

Hasenhuttl has repaid Southampton faith and has earned backing

Saints recruited well and, by all accounts, bounced back swimmingly with two successive Europa League qualifications. But then, of course, the hungry birds loomed overhead once more and a squad that was genuinely full of talent and personality was reduced to a threadbare team gawping at Dusan Tadic to make something happen every game whilst a befuddled Mark Hughes prowled the touchline and berated officials.

Fast-forward to the present day and Saints fans are grizzled veterans of their players being tapped up, shown around clubs’ training grounds and ‘agreeing personal terms’ on the sly. Fans haven’t become completely apathetic; they’ve just learned to view these things with a sense of perspective.

Manager Ralph Hasenhüttl brought an unfamiliar clarity in June when he publicly declared the Denmark international unfit for the captaincy if he wasn’t committed to the club, as well as suggesting that a player in the last year of his contract should ideally be moved along as quick as possible to avoid losing a valuable asset without a transfer fee.

The rules were established for Højbjerg: sign, or be sold. He hasn’t signed. He will be sold. Oddly refreshing and one has to smile at the Germanic frankness of Hasenhüttl’s approach to what could so easily have become a murky situation mired by jabs in the press, refusals to train or inflammatory comments from agents. The Austrian has cut through the noise and handled the affair with confidence and control.

Tottenham were the first team to show a tangible interest in Højbjerg and Jose Mourinho’s proverbial sniffing around the midfielder has persisted even now, with the player seemingly holding out for a formal offer. Spurs are still longing to fill that Mousa Dembélé-shaped hole in the centre of their team and some in north London clearly see the ex-Bayern man as capable of doing so.

Just as the Saints manager exudes a sense of assuredness around what could have played out as a classic transfer frenzy, so too do many of the fans. Højbjerg has been a key part of the Saints’ second-half surge this season, forming an immensely aggressive and organised double pivot with James Ward-Prowse – but he is by no means indispensable.

In fact, since the resumption of the season the former club captain has made just three starts, with the team picking up 11 points from a possible 15 without Højbjerg as part of the starting eleven. The emergence of the versatile young Will Smallbone, as well as the return to form of the consistently consistent Oriol Romeu, have lent Saints plenty of stability without the Dane.

It’s another summer when a key Southampton player seems certain to depart, but this one might not sting as much as usual. The faith that both club and fans have in Hasenhüttl and his ability to cast judgement over these situations, coupled with the team’s proven capability of getting results without Højbjerg, suggest a much more measured approach to an imminent exit.

Southampton are once again looking like the well-run club they’re often painted as. It would be surprising if a replacement hasn’t already been identified.